IS IT WORTH CELEBRATING WORLD ENVIRONMENT DAY IN UGANDA?

We have seen what has happened elsewhere in the world where there has been abuse to the environment. In Uganda, it is unfortunate that some of the politicians and those who think have the money are among the greatest abusers of the environment. They are settling in swamps well knowing the implication but because to them it is to get money at all cost! Some see themselves as untouchable, and what is sad is that some of them are using money corruptly got and or stolen which would otherwise cater for the welfare of the masses. The question is, should in the circumstances Uganda celebrate World Environment Day?
William Kituuka Kiwanuka

ABOUT WORLD ENVIRONMENT DAY (WED)
World Environment Day (WED) is an annual event that is aimed at being the biggest and most widely celebrated global day for positive environmental action. WED activities take place all year round but climax on 5 June every year, involving everyone from everywhere.
WED celebration began in 1972 and has grown to become the one of the main vehicles through which the UN stimulates worldwide awareness of the environment and encourages political attention and action.
Through WED, the UN Environment Programme is able to personalize environmental issues and enable everyone to realize not only their responsibility, but also their power to become agents for change in support of sustainable and equitable development.
WED is also a day for people from all walks of life to come together to ensure a cleaner, greener and brighter outlook for themselves and future generations.
Everyone counts in this initiative and WED relies on you to make this happen! We call for action – organize a neighborhood clean-up, stop using plastic bags and get your community to do the same, plant a tree or better yet organize a collective tree planting effort, walk to work, start a recycling drive . . . the possibilities are endless. Check out the WED pack for interesting suggestions on what you could do
Whatever you do, tell us about it! We will post your activities on this website and make it part of the Wide World of WED map. 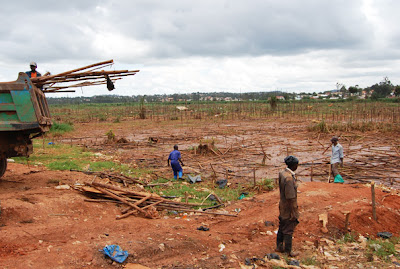 DESTRUCTION: Some residents invaded the Lubigi Wetland and put up market stalls there.
By Flavia Lanyero
Posted Monday, June 6 2011 at 00:00

Kampala
For the last 15 years, Uganda has lost about 4,000 square kilometres of wetlands to degradation, posing a risk of water shortage, experts from Water and Environment Ministry have said.
From 13 per cent coverage of wetlands, the area has dropped to 11 per cent coverage within the same period, experts from the Wetlands Department in the ministry reveal. Urban areas and developing towns are the most prone to degradation due to exploding population and unregulated activities on wetlands.
The Commissioner for Wetlands, Mr Paul Mafabi, said the situation will get worse if urban planners do not strategise for the increasing population. “We may have an exploding population but if it is not well planned for then people will resort to wetlands as a means of settlement and survival,” he warned.

Floods
Mr Mafabi and his team have been carrying out a study on the state of wetlands in the country with preliminary results revealing that major wetlands and their biodiversity are dying out with a serious potential water stress and flooding in the next 10-15 years should wetlands be depleted. Wetlands play a major role in withholding water and releasing it in small amounts.
Mr Mafabi also warned that important bird species such as the Crested Crane, Uganda’s national symbol, whose only habitat is seasonal swamps, would soon get extinct, if their breeding haven are destroyed. The most common forms of wetland degradation include, Murum filling, poor cultivation, industrial pollution and digging channels. Districts where wetlands are under serious degradation are Kampala, Mbale, Jinja, Wakiso, and Pallisa.
While wetlands in northern Uganda are still intact, Mr Mafabi says parts of swamps in Lira are already under attack, saying urban settlers seem to be finding their way into the wetlands. “Gulu has not been so much of a problem but lately as the town is expanding we are beginning to see some effects around Pece, and some areas around the town,” Dr Mafabi said.
The western region is also seeing fresh encroachment in Buweju which has affected water supply in Bushenyi District. In Mbarara, the Rwizi system has continued to diminish due to degradation.
Dr William Muhaire of the National Water and Sewerage Corporation said encroachment on River Rwizi has greatly reduced the amount of water produced in the district with residents sometimes harvesting only mud from the river.
Wetlands are vegetated land areas that are flooded either permanently or seasonally. In Uganda, their most common vegetation is papyrus, but, other wetlands include bogs, flood plains and swamp forests.
In addition to the unplanned exploding population, Dr Mafabi says poor agriculture practices that deplete nutrition of highlands have put the lowland wetlands under attack. But this is also met with an elusive government policy on wetlands to permit ‘developers’ on the wetland, eventually destroying it. “If the population is properly planned for and areas of agriculture correctly utilised then we shouldn’t see the problem of encroachment due to rural urban migration, unplanned settlement is big problem,” said Mr Mafabi.
However, the Commissioner for Physical Planning at the Ministry of Lands, Mr Vincent Byandaimire, says plans are in place to protect the wetlands but the actual implementation is sometimes difficult as directives may come from different angles and planners over the same wetland or land. “Many times the planners from local government may not sit on the same table to give a similar directive and this incoherence results in one party giving out the wetland,” Dr Byandamire said.
Environment analysts say the problem could be potentially solved if the Physical Planning Act which will start working in month time is implemented. Dr Byandaimire said the Act will give an avenue for all planners to sit and lease land jointly. The country also has several laws in place to protect wetlands from degradation.
The National Environment Act Cap 153, The National Environment (Wetland, River banks and lakeshore management) regulations 2000 and the Constitution, prohibit reclaiming, erecting or removing structures, drilling or disturbing, depositing substances likely to have effects on the wetland, destroying part of it or introducing any exotic plant or animal in the wetland.
The penalty for wetland degradation is a fine of not less than three months in prison or a fine not less than Shs30,000 and not more than Shs3 million. However, wetland protectors often times intervene when degradation has already occurred.
For instance, the approval of an Environment Protection Force has not been effected while a draft Regulations Law for wetlands is being formulated and could ensure wetland protection and incorporate penalties and a protection unit.
With Uganda’s population estimated to reach 60 million by 2030, analysts say it remains the task of the 9th Parliament to pass the upcoming laws which could see wetlands rest from encroachment but that should also be coupled with implementation.
Posted by williamkituuka.com at 11:06 PM