THE PUBLICITY OF THE BOMB VICTIMS IS PAYING SOME DIVIDENDS 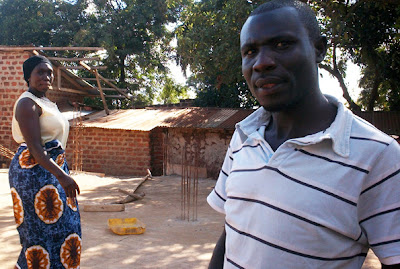 TOUGH TIMES: Unable to pay rent, Ramathan has moved to live with his aunt Khadija’s (left) in Kansanga, a Kampala suburb. PHOTOS BY FLAVIA LANYERO.
When I run the message from Monitor regarding Ramadhan on my blog, little did I know that through that communication, a good Samaritan would help. I thank God very much for that. Below is the evidence.
Willy Kituuka

"Thanks for your message Sir,I have spoken to Mr Ramadhan and sent him UgShs 110,212 to help him with some basic needs and will send the Doctor's bill of UgShs 300,000 Friday
Please cross check and make sure he is the legitimate recipient.
Thanks."

When two brothers decided to sit at the front of the packed Ethiopian Village Restaurant on July 11, 2010, they anticipated thrilling football action. That was never to happen. Instead, one died and the other today lives with a dislocated hip and damaged ear drum. Our reporter Flavia Lanyero, tells the story.
The excitement was fever pitch. It was the game everyone was waiting for, a Spain-Holland football World Cup final. A few minutes before the game began, Muzamil Ramathan and his brother Siraji Abiriga, squeezed their way to the front of the giant screen at the Ethiopian Village Restaurant in Kabalagala, Kampala.
It was not their habit to watch football out of home. But on July 11, 2010, the D-Day, their neighbourhood, Kansanga, a Kampala suburb, suffered load-shedding. There was no way they were going to miss this once-in-a-lifetime event.

Seeking revenge
“Whenever people call for forgiveness of the killers, I feel bad. I want the al-Shabaab annihilated. I am willing to join the Ugandan army and go to Somalia just to have my share of revenge against the terrorists.” The militant Islamic outfit based in Somalia claimed responsibility for the attacks that in total killed 76 people and left hundreds injured. Back to Ramathan, the anger is visible on his face. He, however, is not alone.
His sister, Zulaika Saidi, also has no kind words for the terrorists. The once Arsenal die-hard fan now loathes anything football. “I dread the coming World Cup. I hate football,” she says. “If the government cannot do anything to bring to justice those who killed our loved ones, they should do so we forget once and for all.”
Ramathan too has lost attachment to a childhood love—football—that once saw him play for Kibuli FC, a youth team. Not anymore. “I can’t even watch my friends play football now. It brings back sad memories. The only thing I worry about is my leg. I hope it can heal.”
Posted by williamkituuka.com at 12:18 AM