IF 20BN HAS BEEN FOUND ON KCCA'S GHOST ACCOUNTS, THEN THE NRM GOVT IS SIMPLY A BIG DISAPPOINTMENT TO THE PEOPLE OF UGANDA

President Museveni may be unfortunate as he is going to leave behind a legacy unprecedented when he finally retires from State House.It is sad to learn that during this age and time in the Banana republic of Uganda some people can open and operate ghost accounts to such magnitude as the KCCA is unearthing. The regime has simply be interested in seeing itself remain in power as the tax payer resources are stolen by those thieves majority of who sing NRM and President Museveni songs. It is very sad. KCCA it is hoped will not be frustrated by these thieves who are at times protected by Government.
William Kituuka Kiwanuka

6 EMPLOYEES OF KCC UNDER ARREST
Six employees of the Kampala City Council are under arrest for alleged theft of funds and abuse of office. The arrests come as the Executive Director of the newly formed Kampala Capital City Authority Jennifer Musisi tries to end the pervasive corruption at the council. Speaking on the arrests, Musisi confirmed that more investigations were underway to recover council assets and funds stolen by staff. 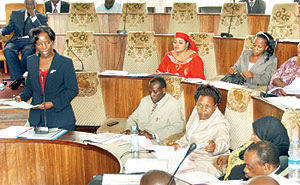 By Vision Reporters
A special audit by the Kampala Capital City Authority (KCCA) has unearthed 12 ghost bank accounts managed by former divisions of Kampala. The accounts hold undeclared cash amounting to over sh20b.
Preliminary audit findings reveal that the divisions were operating 132 bank accounts, and not 120 accounts declared in their handover reports.
The accounts contain large sums of undeclared cash but the circumstances in which they were opened and operated are unclear.
According to audit, the divisions collectively claimed to have a total of sh45.6b in the accounts at the time of handover. But the audit discovered sh52.2b, indicating an excess of over sh6.6b.
The findings show that Nakawa division declared 17 bank accounts with sh5.3b.
But it has been discovered that the division was operating 20 bank accounts with over sh7.4b, representing an excess of over sh2b.
Lubaga division declared 15 bank accounts with sh3b, but the audit found 18 bank accounts with more than sh4b. Whereas City Hall reported that it had 28 bank accounts with sh23b, eight more bank accounts were discovered with over sh25b.
A sum of sh175m was discovered from 19 bank accounts managed by Makindye division, yet it claimed to run 17 accounts with sh3.7b.
An additional sh908m was also discovered by the audit but its source is still a mystery.
Only the Central division was found to operate the 23 bank accounts that it reported, but an additional sh196m was unearthed on finding sh6.199b on the accounts, instead of the sh6b declared.
Kampala chief executive officer Jennifer Musisi said the sh20b would be included in the budget for the financial year 2011/2012.
KCCA council on Tuesday approved a sh174b budget, of which sh74b will be locally generated and sh101b provided by the Government as conditional grants.
Kampala Lord Mayor Erias Lukwago said there had been massive fraud in KCC and these were just some of the things that were being investigated.
Reacting to the findings yesterday, Nakawa mayor Benjamin Kalumba said: “I was not in office at the time, but I know there has been a lot of fraud. What we need are management control systems to ensure that the funds are handled well.”
He, however, appealed to the authority to allow the divisions to access their bank accounts, saying the decision to freeze the accounts was denying people access to basic services.
Former Nakawa division chairman Protazio Kintu said he was not aware that the division was operating 20 bank accounts but advised the authority to put the town clerk to task to explain.

“I declared what I was given,” he added.
Efforts to reach other former division chairmen were futile as their phones were switched off.
Last month, Musisi stopped all operations of the accounts of the five divisions of urban councils under the authority pending investigation.
However, in an interview with New Vision, Musisi said since she was appointed, all powers were withdrawn from the division accounting officers, who were then town clerks and handed.

PATRONAGE POLITICS, DONOR REFORMS,AND REGIME CONSOLIDATION
Using the state and its resources has constituted a vital form of consolidating power for Africa’s rulers. However, donor-sponsored reforms have threatened to curtail the opportunities of African leaders to maintain their regimes in power. Donor reforms introduced under structural adjustment programmes have sought to reduce the size and scope of government as well as to cut state spending and thereby curb the possibilities of state patronage. Reforms have also attempted to contain corruption and improve state governance. In Uganda, however, the relationship between donors and the government has reproduced patronage government. The donors have hailed Uganda as a major case of economic success in Africa. They have provided it with large amounts of financial assistance to support the implementation of reforms. High levels of foreign aid have provided the government with public resources to sustain the patronage basis of the regime. Moreover, in a context where wide discretionary authority was conferred on governing elites in the implementation of reforms, public resources could be used in unaccountable and non-transparent ways to help the government maintain its political dominance. The donors have begun to realize belatedly that they have been propping up a corrupt government in Uganda.
Posted by williamkituuka.com at 10:58 PM