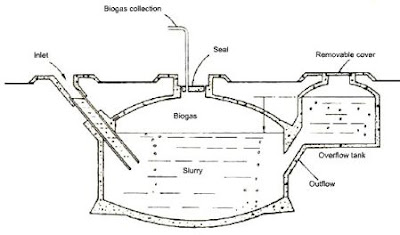 More Photo images of Biogas plants can be found at: http://www.google.co.ug/search?q=IMAGE+OF+A+BIOGAS+PLANT&hl=en&sa=G&prmd=ivns&tbm=isch&tbo=u&source=univ&ei=32L4TYTKB9GJhQeCrJGSDA&ved=0CEYQsAQ&biw=800&bih=461
Urban authorities are having a big problem with garbage disposal in Uganda. The case for Kampala is not news. This garbage is a problem simply because people are not educated about the way vegetative garbage can effectively help them have bio-gas. What the Government of Uganda and urban authorities can go is to get in touch with people who can design bio-gas plants which are user friendly domestically. There is one gentleman by the name Edward Ssembajjwe at Kajjansi Trading centre - 8miles Entebbe Highway,just behind the National Water Office. This guy has a simple plant which can be replicated in many households around the urban centres and the authorities would be surprised how the help with the domestic innovation of bio-gas production can greatly reduce the amount of garbage they have to transport to garbage dumping sites. As people collect Banana peels from markets and restaurants, so will they collect vegetative material from markets and other source areas if only they can get to learn how to use bio-gas.
There is some investment to have the plants operational, and the urban authorities can work out a plan with a financial institution to help potential bio-gas clients to put in place these plants. With people having bio-gas plants at home you can be sure that garbage disposal will greatly be eased as all that will remain is garbage which is not vegetative matter.Secondly,unemployed youth will take on the challenge to collect vegetative garbage as they do for scrap and sell to people who have bio-gas plants.
Bio-gas innovations in Uganda are long overdue.I am convinced that one can set up a plant which packs bio-gas and sells to customers.
William Kituuka Kiwanuka
GARBAGE - KAMPALA'S BIG PROBLEM
Joseph Miti & Ben Simon
22 February 2007
Kampala — KAMPALA city is finally gaining momentum in development and beginning to show signs of change.
New posh buildings are rising up daily, replacing the older, run-down structures while the characteristic impassable/ potholed roads are under repair or construction. Traffic lights are being installed at some city junctions. But despite efforts by authorities and developers to improve the city, the streets remain covered with dust and garbage.

BIO-GAS
The use of methane gas plants as a source of fuel and fertilizer is a practice only recently introduced in this century. The process of bacterial decomposition has occurred in nature since life began—plants and animals die and are recycled to sustain life on the planet. In the presence of oxygen, organic material “composts” (undergoes aerobic decomposition). When decomposition occurs in the absence of oxygen (anaerobic conditions), methane gas is produced, and the liquid remainder is rich in nitrogen and other nutrients.
The natural occurrence of methane (the bubbling gas seen in ponds where animal manures have been dumped) can be duplicated. Water-tight and air-tight containers (called “digesters”) are built, either as pits lined with bricks, concrete or stabilized earth (if this can be waterproofed), or as steel, concrete, or brick tanks. Manures and other organic wastes (after being suitably diluted) can be stored and processed by either the “batch” or “continuous” methods. Premixing chambers, digestion tanks and effluent discharge ponds are linked by pipes. The gas is collected in storage tanks and distributed by smaller gas pipes to serve as a fuel for cooking, lighting, or operating small engines. There are important factors to control in operating an effective methane plant—temperature, pH, detention time, loading rate, carbon/nitrogen ratio and other variables. Different designs and techniques based on local environmental factors and cultural practices have evolved over the last 30 years.
The term “biogas” is now used throughout the world rather than “methane gas” to describe the fuel produced through anaerobic fermentation of manures and vegetable matter in digesters. Biogas is generally between 40 and 70 percent methane, with the remainder consisting of carbon dioxide, hydrogen sulfide and.other trace gases.
While the prospect of generating fuel and fertilizer from organic wastes is an attractive one, significant problems and debate persist about the value of biogas in addressing the energy needs of poor villages in the South.
“Biogas technology represents one of a number of village-scale technologies that are currently enjoying a certain vogue among governments and aid agencies and that offer the technical possibility of more decentralized approaches to development. However, the technical and economic evaluation of these technologies has often been rudimentary. Therefore, there is a real danger that attempts are being made at wide-scale introduction of these techniques in the rural areas of the Third World before it is known whether they are in any sense appropriate to the problems of rural peoples.”

—Biogas Technology in the Third World, IDRC
Some observers (see, for example, The Economics of Renewable Energy Systems by David French) conclude that the lifetime social and economic benefits of the heavily subsidized Indian family-scale biogas plants do not equal the costs of construction and maintenance. In Pakistan and Nepal, only prosperous farmers with adequate numbers of animals and significant amounts of capital have been able to afford to build biogas plants. Although the information on community-scale biogas plants is still very scanty, some results in Indian villages are not very promising. It appears that in terms of fuel and fertilizer, biogas may well be a poor proposition without good management, optimal resources, and a suitable social environment. In most villages it may be advisable to invest first in improved wood stoves and village woodlots rather than biogas systems. However, side benefits such as improved village health and increased productivity in associated enterprises (fish farming, livestock, agriculture, etc.) may tip the scales in favor of a biogas project.
For example, just one small digester at a rural health clinic can power a refrigerator holding vaccines for thousands of people. Spectacular successes have been claimed in the People’s Republic of China. Up to 7 million family and community-scale biogas plants are reported to have been built there. Many people have talked about or actively tried to duplicate the Chinese successes in their own countries, and a number of new publications have arisen to report these trends and developments around the world.
In China, manure handling has much higher acceptance than in most other developing nations. The large number of pigs and the relatively even distribution of resources are significant factors as well. It appears that the Chinese designs are resource-conserving, compact, and adaptable to whatever building materials are locally available. Bricks and stones are used with locally produced, relatively low-cost cement, and in some areas digesters are even carved out of solid rock. Of particular interest are the built-in self-pressurizing mechanisms in the Chinese designs which eliminate the need for costly metal covers. Recently some observers have questioned the applicability of the Chinese biogas experience. Attempts to replicate the Chinese results outside the PRC have yielded very uneven results. Building materials, such as cement, lime and quarried stones which are produced locally on Chinese communes are unavailable or very expensive in many other countries. Also, the Chinese skill and diligence in construction (particularly for the vaulted dome designs) and maintenance may be difficult to find or develop elsewhere. One observer notes that the Chinese digesters are very similar to septic tanks, and that their gas yields per unit volume may be.only a fraction of large-scale sewage digesters—meaning the gas production may be significantly lower than commonly assumed. It should also be remembered that virtually all reports on the Chinese successes have come from the Chinese themselves, so that data on construction costs and gas yields need further confirmation.
Until recently, no clear and concise technical reports on the Chinese biogas technology were available outside China. The International Development Research Center (IDRC) and the Intermediate Technology Development Group (ITDG) have produced two fine translations of Chinese biogas manuals: Compost, Fertilizer and Biogas Production from Human and Farm Wastes in the PRC (IDRC), and A Chinese Biogas Manual (ITDG). The former book covers health and sanitation aspects of biogas fully while the latter presents more comprehensive information on building materials and construction techniques. IDRC’s Biogas Technology in the Third World: A Multidisciplinary Review is an excellent review of the social, economic and technical aspects of this technology and the problems encountered in attempting to spread it outside of China. The authors of that publication conclude:
“The viability of a particular biogas plant design depends on the particular environment in which it operates. Therefore, the research problem becomes one of providing a structure in which technologists, economists, and users of the technology can combine to produce both the appropriate hardware for various situations and the infrastructure that is necessary to ensure that the hardware is widely used.”
Other Asian experiences, from Nepal, Pakistan, and the Economic and Social Commission for Asia and the Pacific (ESCAP) are also featured in the entries in this chapter. To our knowledge, widespread applications or experiments in the developing world have been concentrated in Asia. Interest and activities in other parts of the world have lagged behind to date.
Posted by williamkituuka.com at 1:21 AM