UK commits Shs1.32 trillion to Uganda over next four years 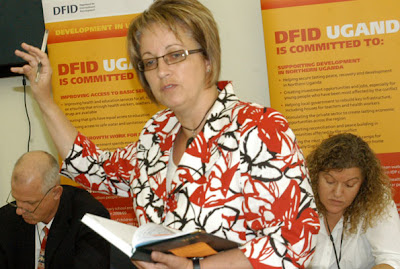 Ms Rintoul (C) and the MDG Results Advisor, Mr Simon Kenny, address journalists in Kampala yesterday. PHOTO BY JOSEPH KIGGUNDU
By Benon Herbert Oluka
Posted Thursday, June 2 2011 at 00:00
The United Kingdom will inject £390 million (about Shs1.32 trillion) in development aid to Uganda over the next four years. The announcement was made yesterday by Jane Rintoul, the head of office at the UK’s Department for International Development (DfID) in Uganda.
Addressing journalists at the British High Commission offices in Kampala, Ms Rintoul explained that the UK’s new development plan for Uganda, which covers the period 2011–2015, represents a 16 per cent increase over previous spending plans.
She added that the funding is intended to help meet the needs of the country’s poorest people, address underlying causes of poverty and tackle the constraints of economic growth.
“Over the next four years, we will particularly target the health sector where opportunities are greatest to improve the lives of women and girls,” she said. “In addition, we shall help address the underlying causes of poverty through job creation, offering financial services, access to education and employment for women and girls, and by increasing accountability and transparency.”
The UK initially launched a development plan for Uganda in 2009. However, it was re-oriented following a series of reviews to match the aid plans of the recently elected Conservative-led coalition government under UK Prime Minister David Cameron.
According to the new operational plan, the annual level of UK development aid to Uganda over the next four years will include a disbursement of £100 million in the UK’s 2011/2012 financial year, £105 million in 2012/13, £95 million in 2013/14 and £90 million in 2014/15.

Expectations
The UK expects some of the impacts of its aid to Uganda to include helping 1.35 million women get access to modern family planning services, helping 400,000 people in the Karamoja region to move away from reliance on emergency food aid, and providing cash grants to another 600,000 chronically poor households in Karamoja, whose circumstances prevent them from working for a living.
Other expected results include getting more than 100,000 school drop-outs back into school (including 66,000 girls), providing four million men and women with safer water, better and cheaper ways of saving and borrowing money, as well as working with Ugandan businesses and government to make the most of the opportunities created by regional trade across East Africa.
Ms Rintoul said while the UK is scaling down budget support to Uganda, at least 20 per cent of the aid is expected to be channeled to the government coffers. She, however, added that future funding will depend on how the government tackles corruption and ensures efficiency.

Utilise well
“It is therefore imperative that the money we are giving to Uganda is utilised efficiently and transparently and delivers tangible and worthwhile results for Uganda’s citizens,” she cautioned. The new aid allocation is part of a global review of the UK’s bilateral aid.
Posted by williamkituuka.com at 8:10 AM