THE COST OF BUJAGALI DAM IS BELIEVED TO BE RELATIVELY ON THE HIGH
Source: NAPE LOBBY APRIL 2008
NAPE LOBBY is a newsletter by National Association of Professional Environmentalists (NAPE) 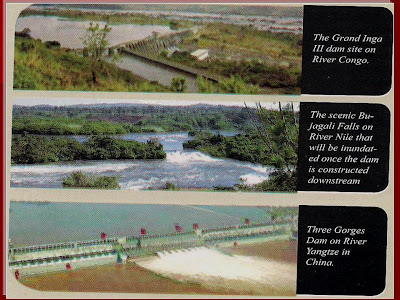 The Grand Inga III Hydro Power Dam Project on River Congo in the Democratic Republic of Congo (DRC) is a 40,000MW power project that is projected to cost US$ 80billion. The power station will have 53 turbines. This project will involuntarily displace 80 million Congolese.
The Three Gorges Hydro Power Dam on the Yangtze River in China is a 18,000MW power project that cost US$25billion. The project displaced 1.3 million Chinese. This project was completed in 2007.
The Bujagali Hydro Power Dam Project on River Nile in Uganda is a 250MW power project whose cost is projected at US$ 860 million and rising. The project will displace about 6,000 Ugandans (approx. 1,200 families). In terms of cost per megawatt, the Inga, the Three Gorges and the Bujagali dam projects will cost US$2.0, US$1.4 and US$3.44 million per megawatt (MW) respectively. Despite the fact that the Grand Inga and the Three Gorges dams are larger and will displace more people than Bujagali, the latter is still the most expensive dam project to ever be considered for construction. It should also be noted that the cost of Bujagali is still rising and could hike well above the US$1.0 billion mark, yet its design capacity is only 250MW. It should also be known that Bujagali will in reality not generate the 250MW, but is only capable of generating 150MW at most under the current and future hydrological regimes. One wonders why Bujagali is still portrayed as the cheapest energy option for Uganda and why it is has a different price from other dam projects in the world!
BUJAGALI IS AN EXORBITANTLY PRICES AND UNAFFORDABLE PROJECT
Bujagali project is an exorbitantly priced and expensive project for the Ugandan economy. At a cost of US$ 860million and rising, the Bujagali project is a significant burden to the tax payers. This coupled with its failure to produce designed capacity (250MW), makes the project one that will not reduce the current electricity shortages (power crisis) and poverty among Ugandans as is often claimed by project proponents. Instead, the project will aggravate poverty and environmental degradation in the country as people resort to using biomass as a source of energy.
The claim that the project will eliminate 150MW of thermal power and thus make a saving in the treasury and halt environmental pollution of thermal plants is only part of the desired solution that cannot be over emphasized.
The tariffs will accrue from the project of US$c 16-17 per kWh when the project comes online and 2020 as claimed by the project consultants (Power Planning Associates) will be unaffordable to the majority of Ugandans and negate government’s energy policy of providing affordable energy to all Ugandans. The tariff will also discourage critical investment and employment creation in the country and cause many people to abandon use of grid electricity and resort to the traditional firewood and charcoal energy sources, thus worsening the energy sources, thus worsening the degradation of forests in the country and the environment in general.

In NAPE LOBBY March 2010
NAPE APPOINTMENT TO BUJAGALI ENVIRONMENTAL MONITORING COMMITTEE CANCELLED BY NEMA
Frank Muramuzi; Executive Director, National Association of Professional Environmentalists (NAPE) reports that, “The successful petition to European Investment Bank (EIB) over the Bujagali projects has resulted in NAPE being removed from the National Multi-stakeholder Environmental Monitoring Committee for Bujagali Hydro Power Project. Dr. Aryamanya Mugisha the Executive Director of National Environment Management Authority (NEMA) communicated that development to NAPE in a letter which reads in part; “Following your conflict of interest in the implementation of Bujagali Hydro Power and Bujagali Transmission Line Projects, as evidenced by your petition to the European Investment Bank, your appointment to the Bujagali Environmental Monitoring Committee has accordingly been cancelled with immediate effect.”
Posted by williamkituuka.com at 1:38 AM