WHERE DID SHS 20M BRIBE COME FROM?

Of course any body with some common sense cannot be taken for a ride that shs 20m paid into MP's accounts was meant for Government business. Since when did Government start taxing monies meant to do its business. Those taking us for a ride think that we are silly; we unfortunately are not. You cannot tax 30% of such money and then go around telling us that it is for NAADS business. I pity my O B at St. Mary's College Kisubi, Hon. Ssekandi, for whatever good he may have done in his career life, he is likely to be remembered for the role he is about to do, to see that the Bill on Traditional Leaders is passed. I thank God, because I am above such.
William Kituuka Kiwanuka

WHERE DID THE SHS 20M BRIBE COME FROM? 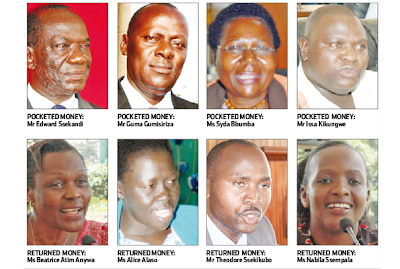 A row is brewing between Ministry of Finance and Parliament over the source of the Shs20 million ‘bribe’ that was given to each MP ahead of the February 18 polls.
Even as nobody is willing to own-up the Shs20m ‘bribe’, the Deputy Secretary to the Treasury, Mr Keith Muhakanizi, and the Director Budget, Mr Patrick Ocailap, have added a new twist to the scandal—asking authorities in Parliament to “tell the truth”.
“The Clerk to Parliament (Mr Aeneas Tandekwire) is the one who paid that money to MPs,” Mr Muhakanizi said. “He should explain where the money came from. He is the accounting officer. That Shs20m was paid by the Clerk not Ministry of Finance.”
Who is fooling who?
But even as the Ministry of Finance passes the buck, the Parliamentary Commission says the Treasury must explain why they gave the money to MPs yet each year they get Shs10m under the Constitutional Development Fund.
“This is not our money,” the Parliament Public Relations Officer, Ms Helen Kaweesa said. “We maintain that we were used as a conduit to pass the money to MPs. We cannot be tasked to explain the budget where this money came from. For us we received the Shs20m from Ministry of Finance for MPs to monitor government programmes.”
She added: “This money didn’t come from our budget. Ministry of Finance asked us to pay MPs because we manage members’ payroll. They should be the ones to explain. In any case, they cannot tell us to explain the Shs20m when all the money we get including our budget comes from them.”
Whereas this claim of ignorance and blame game might look comic, the opposition say it is a sign of a bigger malaise in government—dishonesty and lack of an accountability system.
State House denies
State House—the other agency thought to be the likely source of this money—has also denied funding what is now a full-blown scandal. Ms Lucy Nakyobe—the State House Comptroller—whose institution only recently received Shs95 billion as part of the Shs602 supplementary budget, said: “That money didn’t come from State House budget. The MPs are the ones who approved our supplementary budget and we didn’t have any item to facilitate them to monitor government programmes. State House budget has nothing to do with the Shs20m given to MPs.”
But sources close to the Parliamentary Commission who asked for anonymity in order to speak freely, told Saturday Monitor that the idea was hatched several Thursdays back by members of the Parliamentary Commission linked to the ruling NRM party. The commission is the custodian of MPs’ welfare—and draws membership both from the NRM and the opposition.
According to the source, the idea was then sold to the Finance Minister, Ms Syda Bbumba, who forwarded it to State House for endorsement. The President reportedly okayed the deal, largely because he was convinced a number of his NRM legislators needed the financial hand-out to ably defend their seats in the February 18 polls.
To camouflage the “grand deal”, it was agreed that opposition MPs share the “loot” and help silence questions on Parliament’s role in failing to block the Shs6.5 billion deal as required under the Budget Act, 2001.
According to the source, with many current NRM MPs having lost the primaries in a chaotic election last August, and therefore not qualifying for party facilitation, this deal would help line their pockets as they run as independents.
The NRM has given each of its flag bearers Shs20m, while those vying for Women MPs slots have bagged Shs25 million each. “It was a difficult decision, but upon realising that majority of the NRM independents who lost in the primaries were to miss out on the Shs20 million given to flag-bearers, they approached State House to help them in their campaigns. In other words, the decision to pay MPs came from above and Ministry of Finance had to obey,” said the source.
“They argued that through monitoring government programmes like Naads at the time of the elections, MPs would kill two birds with one stone. This was not a bribe, the understanding was that the minority opposition members would not complain since they also needed money for campaigns. Ministry of Finance was asked to work with the Parliamentary Commission to draw modalities on how to help MPs.”
Commissioners clash
And the Parliamentary Commission has not been spared either. Some members are furious that they were kept in the dark about the deal. Whereas Capt. Guma Gumisiriza (Ibanda North) and Ms Justine Kasule Lumumba (Bugiri Woman) are said to have been in the know, the likes of Kaberamaido Woman MP Florence Ibbi Ekwau and Denis Hamson Obua (Youth North) had no clue about what was happening.
When contacted, Mr Guma said: “Nobody should pretend to return the money because it was approved by the legal department of Parliament. It was discussed and approved by the Parliamentary Commission. Did anyone steal this money? People should be honest and stop pretending.” But Ms Ekwau denies this: “We have never discussed this Shs20m bribe. This is corruption. If we discussed this money, how come it was never captured anywhere in the budget? Let those who claim that the commission agreed to defend their loot as individuals and stop involving the commission.”
Broke government
Ms Bbumba has since asked MPs to take the money even as she warned that government taps were running dry, six months to the end of the financial year. This means that various ministries and agencies are unlikely to execute the planned activities due to lack of funds.
In trying to salvage taxpayers’ money, civil society groups this week gave MPs a nine-day ultimatum to return the money or face legal action. On Thursday, just nine opposition MPs heeded that call—in a House of more than 300. 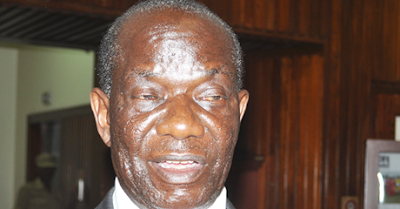 Speaker Edward Ssekandi has defied public anger against rushing the cultural leaders Bill and summoned Parliament on Tuesday to have the proposed law passed before elections on February 18, in fulfillment of President Museveni’s directive.
A memo dated January 28, circulated to MPs who are currently busy campaigning in their respective constituencies, reads in part: “I have been directed to inform you that Parliament will resume sitting on Tuesday February 1, 2011, at 10:30am… to consider the joint report on Legal and Gender (committees) on the Institution of Traditional and Cultural Leaders Bill, 2010.”
On January 6, President Museveni met Mr Ssekandi at State House Entebbe before meeting the NRM Parliamentary Caucus where it was reportedly agreed to have the Bill debated and passed before the elections. The directive later forced the joint committee to hold impromptu public hearings where the government tabled key amendments to the Bill.
Responding to allegations of President Museveni’s interference, Mr Ssekandi told this newspaper recently: “I cannot be directed by anybody. I act as I feel I should act and if I make mistakes they are my mistakes. I can’t interfere in committee proceedings, they have their own schedules. If their report is ready, then I will call Parliament and consider the Bill.” Expressing his thoughts on the controversy that has since been generated, Mr Ssekandi said he was confident that Parliament would be “able to bring out an acceptable Bill.”
Kampala Central MP Erias Lukwago, who together with Kyadondo East MP Sam Njuba, are in the process of drafting a minority report about the Bill, said: “We are not surprised. The way Speaker Ssekandi has been behaving regarding this unconstitutional Bill is suspicious. He is simply doing Museveni’s bidding and this is unfortunate. He first stopped the proceedings on the Bill until after the elections and later after visiting State House, he was forced by President Museveni to eat his words.”
“They are rushing to call Parliament to pass a Bill which is unconstitutional. Some of us are committee members, but we were sidelined with impunity and the committee chairperson, Mr Steven Tashobya (NRN, Kajara), and his friend Pherry Kabanda (NRM, Budaka Woman) conspired against other members.”
Out of 21 Clauses of the Bill, the government has since deleted 15 among them the proposal of handing government the power to withdraw recognition of a traditional leader, who engages in politics, the idea of creating an offence when a person compels another to pay allegiance to a traditional leader and the idea of punishing a traditional leader who provides a platform for members of a political party to discuss politics.
Tabled on December 17, 2009, the Bill, which seeks to bar traditional and cultural leaders from engaging in partisan politics, kicked off a storm with most vocal protests from Buganda Kingdom. Buganda boycotted the committee proceedings after the government refused to share the amendments with the Kingdom for effective discussion.
Most of the MPs who spoke to Sunday Monitor but requested for anonymity in order to speak freely said they will not attend the proceedings on the Bill, not because they are against the passing of the Bill but they will be busy campaigning.
“Unless they wanted us to fail, I don’t see why they cannot wait and we handle that Bill after the elections. They want to make us busy as our competitors are busy campaigning. In any case, some of us who come from Buganda and the people are against the Bill and we don’t want the President to say we defied him. The best way is to stay away and campaign,” an MP from Buganda said.
Buganda Caucus has since passed a bi-partisan resolution rejecting the Bill as unconstitutional and called for its withdrawal after government tabled amendments that substantially changed the original text. Buganda loyalists, human rights activists and legal minds have since vowed to sue the government if the Bill is passed into law.
Posted by williamkituuka.com at 11:24 PM