PRIVATIZED ENTERPRISES IN UGANDA AS AT 30th JUNE 1999

PRIVATIZED ENTERPRISES IN UGANDA AS AT 30th JUNE 1999
STATUS OF DIVESTED ENTERPRISES
The total number of enterprises divested by Government by the end of the financial year under review: 30th June 1999 was 76. Of the divested companies, 52 enterprises were Privatized, 4 were Repossessed by former owners, 11 were stuck off the register while 9 were put under receivership. Included in the privatized enterprises was Nile Hotel Complex which had been sold under a Joint Venture Arrangement but the sale was cancelled after the buyers failed to fulfill their obligations under the agreement. The Hotel was being prepared for resale by the time of the report. 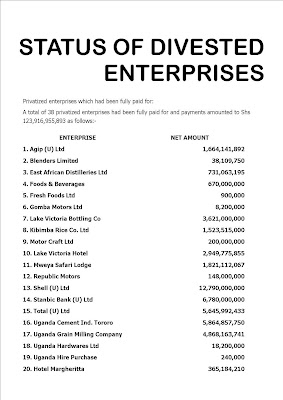 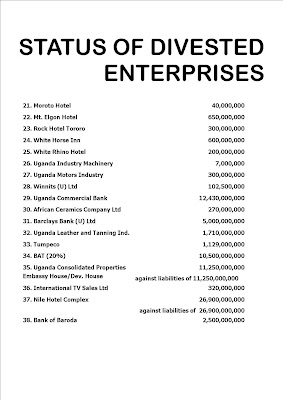 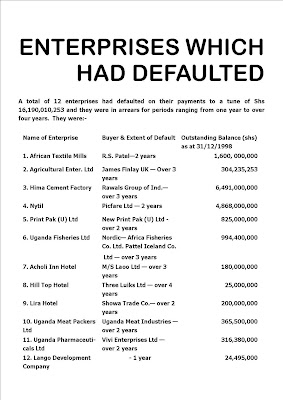 It was noted that some options under the Sale Agreements were not exercised by the Enterprises Development Project thus exposing the project to the possibility of significant and unnecessary losses. Specific examples include the following:-
1) African textile Mills Ltd:-
The agreed sale price for the Government’s share holding in the company was US $ 1.4 million equivalent to shs 1.7 billion. The buyer was required to pay a deposit of 10% of the sale price upon acceptance of the offer and the balance in three installments within 24 months. The sale agreement expressly stated that if the buyer failed to pay the second installment of Us $ 4,450,855 within 6 months (September, 1996), he was to fore go his pre – emptive rights and the property would be sold through open tender system, the proceeds, net of liabilities being shared on a pro rata basis. By the time of this report, only Shs 100 million had been received from the buyer. The special conditions under the sale agreement had not been exercised and no tangible efforts to collect the outstanding dues were verified during the audit.

3) Uganda Fisheries Enterprises Ltd (UFEL):-
Title documents were transferred to the buyer, Nordic – African Fisheries Ltd after receipt of only Shs 105,600,000 out of Shs 1.1 billion sale price. The buyer used the title documents to secure a loan from East African Development Bank (EADB), but was unable to service the facility. UFEL was subsequently put under receivership by the EADB. The Enterprises Development project (EDP) was not sure of recovering the outstanding balance.
Posted by williamkituuka.com at 10:47 PM