HOW IS UGANDA’S GLOBAL COMPETITIVENESS POSITION? 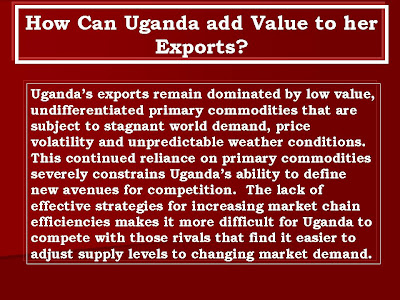 HOW IS UGANDA’S GLOBAL COMPETITIVENESS POSITION?
Source: Competitiveness and Investment Climate Strategy (CICS), 2006 – 2010
By Ministry of Finance Planning and Economic Development - December 2007
Competitiveness can be measured by among other things, the cost of doing business, a country’s positioning within targeted international markets and the level of diversification of products, services and markets.
Improvements in the competitiveness of Uganda’s productive sectors and investment climate will result in increased investment levels and export earnings. However, to compete in the international market, Uganda must compare favourably with other investment locations, particularly within the East and Central African region.
The 2008 Global Competitiveness Survey report indicates that Uganda’s overall Competitiveness ranking declined to 120th out of 131 countries in the 2007 survey. The key areas responsible for Uganda’s poor performance relate to the performance of Uganda’s public institutions particularly cost and access to financing, inadequate infrastructure where Uganda is ranked 108th out of 131 countries; corruption and tax rates. The failure to make significant improvement in these basic requirements will continue to dent Uganda’s economic prospects. The implication therefore is that Uganda needs well performing public institutions, a stable macro-economic framework, appropriate infrastructure and a healthy and literate workforce

Source: Daily Monitor
KAMPALA Uganda has dropped eight places in the latest global growth competitiveness rankings.
According to the Global Competitiveness Report 2005-2006 released by the World Economic Forum (WEF) on Wednesday, Uganda dropped from 79th position in 2004 to 87th in 2005 among 117 countries.
Its East African counterpart, Tanzania, climbed 11 places from 82nd to 71st position to become the most competitive economy in the region. Kenya is ranked third at 87.
The index is designed to measure the set of institutions, market structures and economic policies supportive of national prosperity.
However, Uganda was cited as having the 11th best macro economic environment in Africa out of 25 countries surveyed (71st in the world), putting her higher than Tanzania and Kenya which are placed in the 76th and 77th positions respectively.
In the public institutions index, Uganda ranked lower than Tanzania at position 84 in the world, while Tanzania stood at position 59 and Kenya further behind at 92. However, Kenya is a giant in the technology index at number 8 of the 25 countries surveyed in Africa with Uganda and Tanzania coming behind in 10th and 12th positions respectively.
"By highlighting the strengths and weaknesses of an economy, policymakers and business leaders are offered an important tool to assist them in the formulation of improved economic policies and institutional reforms," said Mr Klaus Schwab, the Founder and Executive Chairman of the WEF.
He said the Report is a contribution to enhancing understanding of the key ingredients of economic growth and prosperity.
Finland remains the most competitive economy in the world, topping the rankings for the second consecutive year. The United States of America is in the second position, followed by Sweden, Taiwan, Denmark and Norway, consecutively.
South Africa is the continent's best-ranked country at position 41. Other African countries that have shown good performances in the rankings are Botswana (46th) and Mauritius (52nd).
The study is one of the leading monitors of the competitive condition of economies worldwide. WEF has been producing competitiveness reports for 26 years.
The rankings are drawn from publicly available data for each of the economies studied and from a comprehensive evaluation conducted by leading research institutes and business organisations in the countries covered by the report. The survey questionnaire was designed to capture a broad range of factors affecting an economy's business environment and that are key determinants of sustained economic growth. Particular attention was placed on elements of the macroeconomic environment, the quality of public institutions, which underpin the development process, and the level of technological readiness and innovation. A World Bank 'Ease of doing business," study showed that globally, Uganda was in 74th place while Kenya 68th and Tanzania 136th in terms of ease of starting and running new businesses.