When will Ugandans stop paying for NRM Government’s sins? It gets disgusting!
William Kituuka Kiwanuka 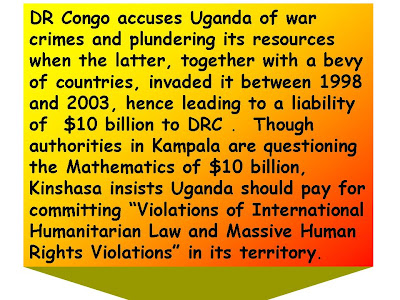 Kampala
The government wants Shs2.5 billion to facilitate lawyers and other technocrats ahead of a meeting with Congolese officials—whose country accuses Uganda of war crimes and plunder of its resources. The money, being sourced as an emergency under a supplementary budget request to Parliament by the Ministry of Foreign Affairs, will be for a meeting slated for later this month. DR Congo accuses Uganda of war crimes and plundering its resources when the latter, together with a bevy of countries, invaded it between 1998 and 2003.
In 1999, Congo took Uganda to the World Court—seeking reparations of between $6b and $10b—which the court said was a fair claim. The UN court sitting at The Hague, however, gave the countries an option of settling the matter between themselves. The upcoming meeting is part of this negotiation—that according to the foreign affairs permanent secretary, Amb. James Mugume—is a follow-up on the Ngurdoto Agreement signed between Presidents Museveni and Joseph Kabila in 2007.
The agreement aimed at resolving this stand-off. But MPs have questioned this fresh Shs2.5b request after it emerged that Uganda contracted and paid in full foreign lawyers, Prof. Ian Brownlie from UK and Folley, Hoag and Eliot (Paul S. Reicher) from the US to defend it at The Hague.
Lawyers paid
Prof. Brownlie, a British practicing barrister, specialising in international law passed away last year on January 3. Daily Monitor investigations have revealed that lawyers were paid Shs2 billion and a “detailed defence” on the case was completed in March 2004.
According to sources, Bank of Uganda advanced Shs1.2b to government for partial payment on the case and a balance of about Shs721m was paid later after the lawyers threatened to sue for breach of contract. Opposition MPs led by shadow Finance Minister Oduman Okello (Bukedea) have threatened to block the new request, arguing that the foreign affairs ministry has no mandate to handle legal matters.
The MPs also say individuals implicated in DRC “plunder” should foot the bill and not taxpayers. MPs, however, did not name the individuals in government.
“Those who want the money should take the bill to the culprits and not taxpayers,” Mr Okello said, adding: “If some people in government looted gold and timber in DRC, then, this cannot be a responsibility of the taxpayer. In any case, the lawyers were even paid, let them use technical brief to defend the case.” But Mr Mugume said the money was “needed urgently to enable the Ugandan team prepare a new response on the case” ahead of the sitting of the Joint Permanent Commission to discuss the way forward on the case.
No pay
On whether Uganda is willing to pay the DRC, Mr Mugume said: “There is nothing like $10 billion for DRC. We don’t know about that amount. The ICJ has never pronounced itself on that figure. The court only asked us to negotiate with DRC and this is what we are going to discuss.”
Mr Mugume also said the government formed a joint team together with lawyers in Washington, adding that in handling the case, his ministry signed a memorandum of understanding with the Justice ministry.
While authorities in Kampala are questioning the mathematics of $10 billion, Kinshasa insists Uganda should pay for committing “violations of international humanitarian law and massive human rights violations” in its territory.
If the two countries fail to agree, DRC is likely to go back to The Hague—in a last ditch effort to force Uganda to pay, a move that might plunge Ugandans into debt—considering that its annual expenditure is less than half of the $10 billion Congo wants.
Posted by williamkituuka.com at 10:47 PM