THE MAJOR REASON FOR NON ATTENDANCE AT SCHOOL IN UGANDA 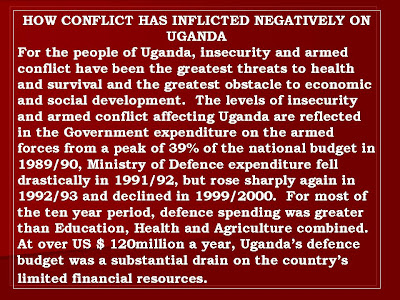 Raising financial resources by vulnerable children to meet the cost of education in Uganda is the major reason for non attendance at school. The Common Country Assessment of Uganda, United Nations, 2004 says that only 24% of boys and 21% of girls in the 2003 Universal Primary Education (UPE) completed Primary Seven (P7) of the primary cycle. While Education is nominally free of charge (for those accessing UPE; there are not enough schools for all needy), the 2004 National Service Delivery Survey, Uganda Bureau of Statistics, 2004 found that payments were often requested. There are also associated costs, such as Transport, Uniforms, Exercise books, Geometry sets, capacity to do homework (no fuel); 63% of those dropping out of school cited cost as the main reason. One in four children from urban households can count on receiving secondary education while one in ten from households living in rural areas is likely to have access to same level of education. Orphan hood is a major barrier preventing school attendance; and those due to HIV/AIDS who are under 18 years are over 900,000, and, with a population growth rate of 3.4% per annum, the situation worsens with time. Yet, according to the Uganda Demographic and Health Survey (UDHS) 2006, Uganda has a young population with the majority 52% below 15 years. Loss of one or both parents results in lack of proper care and poorer economic conditions that limit access to education. It is important getting a solution to the would-be uneducated children as these add at an increasing rate to the army of the uneducated whose prospects to development are under exploited. Secondly, the non-school going children are constantly looking for support in form of bursaries yet many cannot access them leaving them frustrated. There is evidence that many vulnerable children when availed education opportunities are positive development agents as deprivation induces them to deliver to society. Leaving the numbers of uneducated children to increase is a great potential for social evils as circumstances induce many into criminal activities to earn a living. Educating the would-be uneducated vulnerable children is important so that they can become productive and capable citizens to help the country’s development efforts.
Posted by williamkituuka.com at 12:46 AM