MILLIONS LOST AS TRAIN DERAILS IN KENYA
Good God, where are we headed? All the time the country is making losses. It disturbs. Only God the creator can make things better for the Pearl of Africa.
William Kituuka Kiwanuka 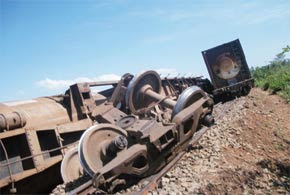 The fuel tankers which derailed near Malaba in western Kenya, spilling over 200,000 litres of fuel destined for Kampala
By Reuben Olita

OVER 200,000 litres of fuel worth millions of shillings spilled on Saturday night when a train transporting fuel to Uganda from Mombasa derailed 10km to Malaba border in Kenya.
Five tankers overturned with only two remaining intact in the 8:00pm incident that occurred at Nauria village, Kapina sub-location in Nambale district.
Residents had a New Year feast as they siphoned fuel from the tankers throughout the night but were lucky there was no fire outbreak. Some 110 people perished when a petrol tanker caught fire on January 31, 2009 in Molo in Kenya.
Bukhayo North chief Moses Opiyo said the poor state of the rail could have caused the train to derail.
He added that the fuel spilled over 1km away to the nearby River Nauria and was threatening the lives of cattle and people, who rely on the water for survival.
Meanwhile, drama erupted when police officers censored the type of pictures being taken, and prevented journalists from taking photos of people siphoning fuel.
The tankers, which included one belonging to Mukwano oil, were severely damaged. Officials from Rift Valley Railways did not explain the cause of the derailment.
Bungoma Railway police boss Selina Limo was among the first to arrive at the scene at 9:30pm and prevented residents who had flooded the scene to siphon fuel.
Experts said the Nairobi-Malaba railway line needed upgrading.
“These lines are too small and old. We need to increase the railway caliber to accommodate new modern wagons which travel faster,” said logistics consultant in charge of Western Kenya, Joseph Spee.
Spee said Kenya and Uganda have World War II trains, adding that the region needed second generation trains before they acquire electric ones.
Residents complained of fuel spillage, saying it had spoilt their environment and appealed to the Rift Valley Railways to compensate them for the lost vegetation and polluted river water.
The engine was disengaged from the tankers and allowed to proceed to Malaba railway station.
Uganda relies on Mombasa port for imports and exports. The move to use the railway to transport oil is meant to make it safer and cheaper compared to roads.
Posted by williamkituuka.com at 10:56 PM