DOES SALIM SALEH HAVE A MICRO - FINANCE? 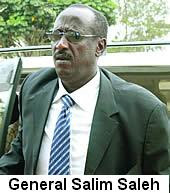 Monday 31st January 2011, a lady called on me wanting a proposal document written for her so that she takes the same to Jumba the man who is standing for MP Busiro South Constituency on the NRM ticket. The lady gave the idea she wanted, and said she would collect the write up today morning. I was nice to her and took the piece of paper on which she had put the details of the proposal she wanted written. Today morning, she got a disappointment from me. I told her off. This is one of the living situations of the people we tell every other day the decay in NRM but they have failed to relise it. This is one woman who claims to be born again! The money is clearly a bribe and it is said that Jumba who resides in Bweya central Zone Kajjansi takes the prospect beneficiaries in his car and the meet Saleh. It is so unfortunate the decay we have to live with in the NRM leadership time. This guy Jumba can not win a Constituency which belongs to the Democratic party, but given the poverty levels into which NRM has put many Ugandans, he could get the constituency by using money. I cannot subscribe to NRM money. Let those who want to eat it, do but i for one, I was brought up in a real Christian family. My Late Father taught for years at Namutamba Teachers' College which the NRM has killed as has been the case with much of the infrastructure they found in place. I would be out of my senses to subscribe to anything NRM. The sooner the people of Uganda realized Uganda's problem with NRM leadership the better.
William Kituuka Kiwanuka 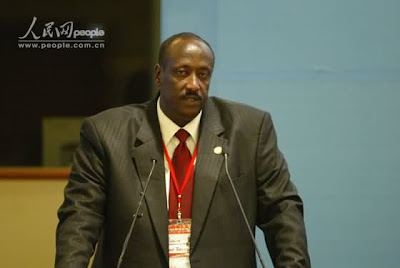 Ismail M. Ladu and Tabu Butagira
Source: http://allafrica.com/stories/201011110091.html
11 November 2010
The Bank of Uganda Governor, Mr Tumusiime Mutebile, called for investigations into the source of about Shs500 million stolen from Gen. Salim Saleh's daughter, describing its in-house storage as "suspicious."
"Why should anyone keep that kind of money in the house? It means that that money is coming from a bad source. If that's not the case, why do they fear to keep it in the bank?" he asked. "As the Central Bank governor, I am now concerned and they should be investigated immediately."
A spokesman for the police, to whom the governor passed the buck, however, said such an inquiry is unlikely because storage of such amount of money in a private residence is no "offence".
"It only raises suspicion, but it is not an offence," said Mr Ibin Ssenkumbi, the Force's spokesperson for Kampala Metropolitan. Four days ago, Nakawa Chief Magistrate Deo Ssejjemba, convicted and handed down an eight-year jail sentence to housemaid Caroline Saturday, for stealing $200, 000 (Shs460m) and Euros 2,500 (Shs8m) from Ms Doreen Kiconco.
Ms Kiconco is daughter of Gen. Saleh, a younger brother to President Museveni.
The money, enough to pay salaries of some 2,340 primary school teachers in Uganda, was stolen from Royal Palm Estates residential apartment in Butabika, a city suburb, mid last month.
Gen. Saleh's wife Joviah, who closely followed the case, said she would not divulge the source of the money because the enquiry was in bad faith, even when the cash was not hers.
"Write whatever you want, I don't care," she said. "If there's an investigation, they know where to find me - and I will tell them how I make my money."
Saying journalists are following the case because her family name makes newspaper headlines and sells copies, Ms Saleh added: "Go and write your rubbish."
Presidential candidate Kizza Besigye first raised the need to establish the source of the cash last Sunday while campaigning in Mpigi District.
"The poor girl was just tempted by the piles of money that she saw. She picked just a portion and left a lot of it there," he said. "Instead of finding out where the money came from, they are prosecuting the young girl."
President Museveni in October last year, suspended the former National Forestry Authority Executive Director, Mr Damien Akankwansa, saying authorities needed to investigate the source of Shs900m his wife Juliet allegedly stole from their bedroom.
Mr Mutebile said it was odd Ms Saturday's trial and conviction was expedited within three weeks. "The girl who stole the money has since been convicted so I want the source of that money to be made public as well," he said, adding that even Shs1 million is "too much" an amount to keep in the house. Mr Mutebile recently called for immediate arrest of businessman, Mr Michael Ezra, for flashing before journalists what he said was $3 million (Shs6.3b) in $100 bills.

BESIGYE CALLS FOR INVESTIGATIONS ON SH 500 MILLION STOLLEN FROM SALEH Nepotism claims
The money, enough to pay salaries of some 2,340 primary school teachers (each primary class teacher gets Shs200,000 per month), was stolen from Royal Palm Estates residential apartment in Butabika, a city suburb, mid last month.
Speaking at various campaign rallies in Mpigi District, Dr Besigye, the Inter-Party Cooperation (IPC) flag bearer, said he suspects the cash could be part of what “the clique surrounding the President has been stealing from the public”. “The poor girl was just tempted by the piles of money that she saw. She picked just a portion and left a lot of it there,” he said. “Instead of finding out where the money came from, they are prosecuting the young girl.”
Gen. Saleh’s known telephone number was unavailable by press time and we were unable to reach his daughter. In October last year, President Museveni suspended the former executive director of the National Forestry Authority, Mr Damien Akankwansa, saying authorities needed to investigate the source of Shs900 million his wife Juliet allegedly stole from their bedroom.
Dr Besigye has made nepotism by the ruling government part of his rallying call on Buganda to ditch Mr Museveni and embrace change. “The system now is such that money is absorbed from the poor and goes to a privileged class surrounding the President and this includes his relatives, friends, in-laws and power-brokers,” he said.
However, Presidential Press Secretary Tamale Mirundi said last evening that Dr Besigye, who heads the opposition Forum for Democratic Change party, is sour-griping because “he’s now out of government”. “When he and wife Winnie Byanyima were both in government, why didn’t they complain of nepotism?” he asked. “He should lie low like an antelope because he has no new ideas to offer.”
Dr Besigye, a former political commissar of the Movement as the ruling NRM was called then, parted ways with President Museveni a decade ago after he authored a dossier detailing alleged digressions by the leaders from the original ideals that took them to the bush in 1981. This is his third attempt at the presidency.
Mr Mirundi said employees at State House are a collection of all Ugandan tribes, adding that where relatives are employed, it is because they fought in the National Resistance Army bush war. He said: “Guerrilla warfare is normally fought by close relatives who can’t betray one another.” He added that poverty eradication is a personal war and all government does is provide an enabling environment for hardworking people to prosper. “Poverty isn’t an invention of President Museveni,” said Mr Mirundi. “Getting out of poverty is a personal obligation; poverty is like a lion which one should confront alone.
Posted by williamkituuka.com at 11:37 PM