THE PROBLEM OF GOVERNMENT OF UGANDA GUARANTEED LOANS

THE PROBLEM OF GOVERNMENT OF UGANDA GUARANTEED LOANS
President Museveni's Governance has been very successful in misusing tax payer money.. Much of this is cited in bail outs, the other billions in the creation of a middle class name it. It is unfortunate that some people believe that President Museveni's Governance still has a positive role in our times. the truth is that if it were not the use of the military, his usefulness expired long ago. Continued governance is unfortunately a big big liability for the country if it is to continue on the world map.
William Kituuka Kiwanuka 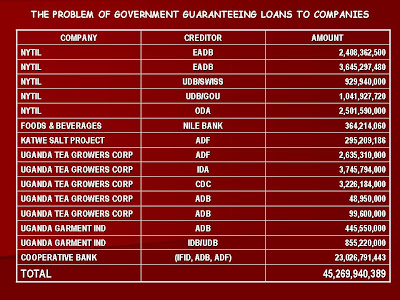 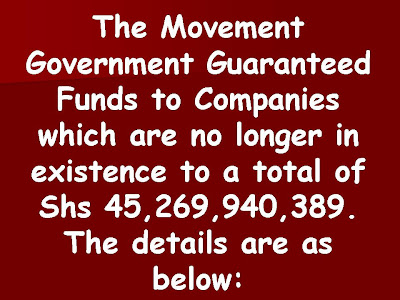 GOVT TO WRITE OFF BASAJJABALABA LOANS
SOURCE: http://www.connectuganda.com/forum/broken-news/4040-tax-payers-money-what-a-shame
News | October 24, 2007
YASIIN MUGERWA & EMMANUEL GYEZAHO
PARLIAMENT
A PLANNED government write-off of about Shs 1.6 trillion in bad loans and bailouts to businessmen including Hassan Bassajjabalaba and Vellupilai Kananathan of the struggling Tri-Star has drawn protest from Parliament.
Parliament's Public Account's Committee has written to the Secretary to the Treasury protesting a planned move by the government to cancel loans to 'illegally' bail out ailing businesses such as that of hides and skins dealer, Mr Bassajjabalaba and textile manufacturers, Apparel Tri-Star and Phenix Logistics.
Officials in [Ministry of] Finance should get ashamed. We are talking about half of our national budget illegally given to individuals and now they want to write-off this money. This is taxpayers' money and must be recovered as a matter of urgency," Mr Nandala Mafabi, the PAC chairman told reporters at a press briefing yesterday.
MPs now want the government to recover the taxpayers' money by attaching the debtors' property. They have also demanded a full list of all government debtors, original agreements signed with borrowers, demand notes and the criteria used to select loan beneficiaries.
The protests were sparked off by revelations in the Auditor General's report for the year ending June 2006, which stated that loans to private enterprises which stand in excess of Shs1.2 trillion, have been "considered irrecoverable" and are "pending Parliamentary approval; to be written off as bad debt.
You may recall that loans which were given to farmers [peasants] under the Rural Development Scheme through Uganda Commercial Bank were collected," the PAC letter to Ministry of Finance reads in part. Mr Keith Muhakanizi, the deputy secretary to the Treasury said yesterday there are companies the government has bailed out in the recent past.
He named Tri-Star Apparel, Hassan Basajjabalaba, Mr Yuichi Kashiwada, the MD of Phenix Logistics Uganda Ltd and BM Technical Services Ltd, a firm in western Uganda.
Mr Muhakanizi is contesting the findings of the AG over the amount of moneythe government has lent out to individuals.
Daily Monitor witnessed the drafting of a letter to the AG by Mr Muhakanizi, demanding for a breakdown of the Shs1.6 trillion.
He said he could not recall "giving anybody a trillion in the recent past" apart from the four companies whose bailouts were "done many years ago."
But the AG's report said; "Government loans to private enterprises amounting to Shs221.6b were not recognized in government consolidated financial statements. I am not able to vouch the status of these loans. Shs1.25 trillion on-lent is still outstanding and is considered irrecoverable pending parliamentary approval to be written off as bad debts."
However, PAC Chairman, Mr Mafabi insists the principal figure to be written off stands at Shs 1.6 trillion. He said even the Shs 221.6 billion which is not reflected in the consolidated government financial statements is part of the bad loans.

The bailouts
In 2004 President Museveni directed Bank of Uganda to bail out Mr Basajjabalaba with Shs21 billion of taxpayers' money. Also, in 2005, Mr Museveni ordered a Shs13.4 billion tax waiver for Mr Bassajjabalaba. The defunct Tri-Star Apparels, created to export textiles to America, took up more than Shs 20billion of taxpayer's money in government loans.
To get the troubled company started, the government guaranteed Tri-Star a loan of $5 million (Shs 9.2 billion) with a $7.5m (sh13.8b) BoU guarantee and another $ 3.5million (Shs 6.2 billion) later obtained from dfcu Bank in 2003, with a $ 4million BoU guarantee.
In September, President Museveni directed that some $3 million of taxpayers' money (Shs5.7 billion) be given to Phenix Logistics to boost Uganda's exports to the Agoa market.

Ugandan Government Initiative to Subsidise Solar Power Equipment by 45% to be Implemented by Rural Microfinance Institutions (MFIs)
The Rural Electrification Agency (REA) of Uganda, a semi-autonomous public-private partnership created by the Ugandan Government, has announced a 45% subsidy, up from the current 14%, on all solar power equipment. The subsidy will be will be promoted through a network of rural microfinance institutions (MFIs), and non-government organisations (NGOs), who will be providing a cash payout to those who install the solar systems, or a loan or a loan-offset.
The new policy is part of the solar power component of the Energy for Rural Transformation (ERT) programme, a 10 year plan that aims at increasing electricity access to rural areas. The programme is an initiative of the Ministry of Energy & Mineral Development and the Private Sector Foundation of Uganda (PSFU), an association of businesses, corporate bodies and major public sector agencies that support private sector growth, plus nine donor agencies. It is funded by the Rural Electrification Fund of Uganda, the World Bank (the international quasi-public bank), the United Nations Development Programme (the UN’s global development network), as well as MFIs.
Only 5% of Ugandan households have access to electricity, according to government figures and only 3% in rural areas, despite the formation of the REA in 2001. The target is to reach 10% by 2012.
So far solar power has made little headway in Uganda, as current devices are expensive, with the smallest solar lantern (5 watts) costing USD88-147 in a country where four out of 10 people live on less than a dollar a day.
Through the new scheme, private solar equipment suppliers will be encouraged to invest in rural areas, thereby meeting the ERT goal of achieving 80,000 new connections by 2010. In the past six years, the government has installed less than 10,000 solar systems.
Participating MFIs will receive credit lines from the REA, as well as direct subsidies for solar system customers (MFIs). There will also be grant advances for those wanting to enter the solar equipment market or to expand into it further. For customers there will be a one-stop application process for REA subsidies, public-private sector grants and credit from MFIs, using one consolidated application form.
Posted by williamkituuka.com at 9:33 PM