THE POLITICS OF WETLAND MISMANAGEMENT IN UGANDA 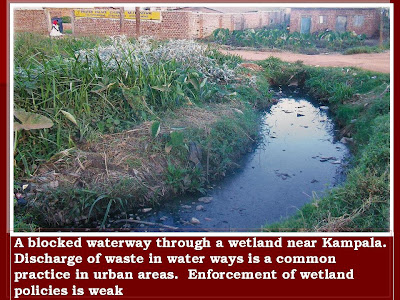 THE POLITICS OF WETLAND MISMANAGEMENT IN UGANDA
Source: NAPE LOBBY APRIL 2008
Part of the Extract by Kureeba David
Environmental politics aims to explore the interface between the goals of conservation, society and mainstream politics, instead of favouring one against the other.
Wetlands cover about 13% of the total area of Uganda, with permanent wetlands covering approximately 7,296 square kilometers, and seasonal wetlands covering about 2,809 sq. km. A total of 2,376.4 sq. km of wetlands have been encroached upon and reclaimed in Uganda today. This implies that almost all the seasonal wetlands in the country have been encroached upon and reclaimed for human settlements, industry and agriculture. In Eastern Uganda alone, 20% of the wetlands have been destroyed compared to 2.8% and 3.6% in Central and Western Uganda, respectively.
This degradation of wetlands is driven by the fact that the existing laws governing wetlands in the country are not adhered to or are poorly executed (enforced) causing by the Government institutions mandated to oversee and govern them.
The failure to adequately enforce the policies and laws governing the environment and wetlands in particular is attributed to the duplication of roles and mandates across the many government ministries, departments and authorities.
Wetlands degradation in the country has been worsened by the government’s principle and practice of considering industrial and commercial development superior to preservation and conservation of wetlands and the environment. In the past 30 years wetlands were considered as wastelands, but as a result of the growing population and demand for cheap land for settlements, industrial and commercial developments, wetlands have become prime areas for such developments.
Current national policies and laws prohibit encroachment and reclamation of wetlands and lakeshores, but the rich and politically influential in Uganda have gone to the extent of flouting the existing laws under the helpless watch of the institutions mandated with enforcing the laws including National Environment Management Authority (NEMA), Wetlands Management Division (WMD). As a result, we see hotels, industries, flower farms, petrol stations and residential houses mushrooming in the wetlands and shores of Lake Victoria in Uganda. These developments usually lack proper waste, water and sanitation systems and consequently discharge their effluents into the wetland and lake systems. This is the reason why Lake Victoria is today plagued with blue green algae blooms that have compromised water quality, increased the costs of water purification and retarded fisheries in Lake Victoria.
When a poor and politically non-influential individual is caught flouting the laws, these very institutions are quick to reprimand, arrest and/or punish the individual. This selective enforcement of the laws can only be described as injustice and environmental politics of destruction. It also brings into question the relevance and credibility of all those institutions mandated with governance of the environment.
As a consequence of the poor development and management of wetlands, floods, water borne diseases, seepage of sewage, accumulation of domestic, commercial and industrial solid wastes and bad smells (odour) in the city and surburbs are common phenomena. Evidence of wetland abuse is common in media reports.
There is need for concerted effort by every citizen to ensure that national laws are not abused and there is also need for the institutions mandated with environmental governance to enforce the laws without fear or favour, if environmental sanity and sanctity is going to be realized.
Posted by williamkituuka.com at 1:36 AM