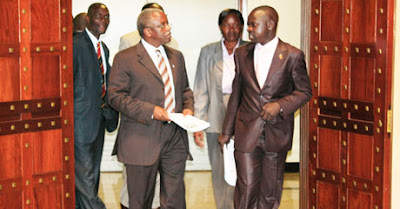 CLASH OF INTERESTS: Minister Mbabazi and Mr Godi after a heated debate in Parliament over supplementary budgets. PHOTO BY NELSON WESONGA

It is clear that the current arrangement of approval for funds by the Parliament does not help the tax payer. Two years' today, the Auditor General will come up with a report informing Government how colossal sums of money were wrongly used or benefited corruption. This situation should be arrested. Parliament should approve funds after the Auditor Generals Office has done the necessary auditing so that the vultures are not left to reap where they did not sow. In essence, the way Parliament approves funds is less useful to the tax payer as those with the capacity to establish the various valuations are not part of the exercise instead they come to give us the bad news of substantial sums having been lost as was CHOGM. If our leaders have our country at heart and are not interested in taking advantage of the status quo, they should change the procedure.
William Kituuka Kiwanuka.

STATE HOUSE BUDGET SHOTS TO SHS 160
Reported by the Monitor

The ruling party yesterday used its numerical strength in Parliament to force through the approval of more than Shs600 billion in “emergency” spending even as the opposition accused President Museveni of using public funds for campaigns....

PARLIAMENT yesterday passed a supplementary budget of sh600b despite objection from opposition members.
Led by opposition leader Prof. Ogenga Latigo, the MPs demanded to know the emergencies that had come up in ministries within six months after the main budget had been passed and needed urgent funding.
They mainly objected to over sh79b requested for State House, which they suspected would be used to fund campaigns.
The claims were, however, denied by the NRM secretary, General Amama Mbabazi, saying the party had sufficient resources to fund its campaigns.
MPs Cecilia Ogwal, Francis Epetait, Peter Mutuluza, and Odonga Otto asked the finance minister, Fred Omach, to give details of the expenditures rather than generalising them.
The budget committee in their report to Parliament presented by MP Rose Okol had also raised concern over requests by State House for a supplementary budget and recommended that the finance ministry revises the issue.
“What disaster has befallen State House in such a short time that Parliament had to be called to approve the expenditure?” Epetait asked.
Six months ago, the Government approved a budget of sh8trillion yet it has spent sh8.6 trillion so far.
According to the law, the Government is allowed to seek approval of additional funds to cater for emergency expenditures that were not foreseen during the budgeting process.
The House, however, rejected a request for sh3b by the finance ministry to capitalise Phenix logistics and sh850m requested by the ministry to cater for general supplies and other items for Hoima Hospital.
The MPs said no money should be given to Phenix until the ministry accounts for the money it has advanced to the company so far.
They also demanded that a forensic audit be carried out to ascertain whether the money was being properly used.
According to the report, the defence ministry is requesting for the biggest share of sh89b. Of this, sh14b is to be used to wind up the UPDF war in Congo, sh9.8b is for preparation activities to beef up the Police during and after the general elections and sh50b is to match the “challenges ahead”.
The Electoral Commission received sh83b as additional funds to cater for new expenditures for the elections as a result of increased number of districts and candidates.
The Inspectorate of Government was given sh891m as additional funds to cater for investigations and prosecution of individuals involved in the misuse of CHOGM and NAADS funds.
The House also approved sh5b for the resettlement of 10,000 survivors of the Bududa landslide.
Posted by williamkituuka.com at 10:31 PM