WHETHER MUSEVENI HAS SHS 20BN TO GET BUGANDA, THE READING IS TIME UP FOR HIM

Museveni may do whatever is possible and impossible to remain in power, but the reading is clean and clear: "TIME UP FOR MUSEVENI. HE IS MORE OF A LIABILITY TO THE COUNTRY NOW THAN AN ASSET."
The struggles Museveni is making against what he has done for the country and what he can add on are those of any one who see's that he is on the disadvantaged side. As some NRM poor chaps prefer to call him "Nyini sente" (meaning owner of the money), this is false aggrandizement. Much as I can appreciate the manipulation by many illiterates, I would imagine that most of our schools do a good job, they don't train empty tins. We must get matters of our country right. What was done by past leaders is wrong, but to leave a repeat by people who have gone to school and benefitted from tax payer money is an abuse of our integrity. Surely, Museveni may make, but as former leaders came and left, our prayer is that the good Lord shows him exit without shedding blood by innocent Ugandans. Enough is enough.
William Kituuka Kiwanuka 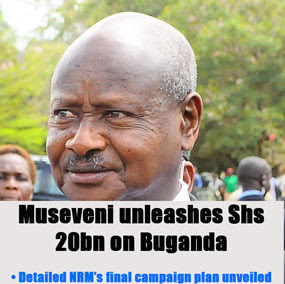 MUSEVENI UNLEASHES SHS 20BN ON BUGANDA
The National Resistance Movement has laid down what it calls a “zero graze” strategy for Buganda region, targeting ten groups.
The strategy, according to documents seen and from conversations with some party mobilisers will cost the ruling party as much as Shs 20 billion.
The Observer has learnt from NRM campaign strategists that President Museveni, who is now campaigning in Buganda, is ready to pull all the stops to ensure victory in the region, which has become unpredictable following bad blood between his government and Buganda Kingdom.
“We would rather lose in any other region but not Buganda. Winning the general election without necessarily winning in Buganda would undermine our leadership. That is why we must beat the opposition here,” a campaign strategist told The Observer on condition of anonymity.
The opposition, particularly the Inter-Party Cooperation (IPC), whose flag bearer is Dr Kizza Besigye, is also eyeing the Buganda region, hoping to capitalise on the relations between Mengo (the seat of Buganda Kingdom) and the central government being all but cordial.
The IPC, through its Buganda-based pressure group, Ssuubi 2011, has promised to deliver the kingdom’s cherished federal system of government if elected. Other promises include the return of Buganda properties seized by the central government when kingdoms were abolished in 1967.
Notwithstanding this, the Museveni team appears convinced that its costly plan will deliver the votes. The sum will indeed raise eyebrows among critics who accuse the ruling party of using public resources to campaign for its presidential candidate.
Only recently, the government wired Shs 6.5bn into the accounts of 321 MPs purportedly to help them “supervise government programmes”.
This move has been widely criticized as an attempt to bribe the legislators. Moreover, it came shortly after the parliamentarians hurriedly passed a supplementary budget of Shs 600bn, with most of the money going to election related activities.
NRM plan
According to the strategists we spoke to, NRM’s mobilisation is based at sub-county level to enable them reach the grassroots.
Ten leagues have also been identified in every district and sub-county, including youth, women, people with disabilities, workers/entrepreneurs, elders, veterans, institutions, media and district executive committees.
All these leagues are to be replicated in the sub-counties of each of the 23 districts in Buganda. This alone is to cost the NRM Shs16 billion.
“Our strategy is for each and every league to zero graze on its target group. The executive committee has been treated as a league in order to coordinate and oversee the mobilisation exercise,” the strategist disclosed.
NRM regional leaders are expected to meet with different categories of people, including opinion leaders, traditional leaders, spiritual leaders, veterans, NRM cadres, and former RC/LC leaders. They will address public rallies at sub-county level and participate in radio talk-shows and phone in to programmes.
The general mobilisation is to act as a curtain raiser in the communities in preparation for the candidate’s campaign rallies, and for follow-up purposes thereafter. This grand plan, sources have told us, is expected to extinguish the negativity generated by, among others, the controversial cultural leaders bill in Buganda.
Fearing the worst, the 50 MPs from Buganda belonging to NRM, and some ministers, have rejected the bill. President Museveni, however, insists the bill has been brought in good faith to keep the Kabaka and other cultural leaders out of politics.