ACCIDENT MOTORISTS DON'T SEEM TO GET PUNISHED ENOUGH IN UGANDA

A Ugandan previously working as a Taxi Driver came back to Uganda sometime ago after the authorities in UK withdrew his driving permit and he was rendered jobless hence coming back to Uganda.
It looks like the penalties the Ugandans get after traffic offences many of which lead to death or serious damage to the victims are not serious enough to lead to more careful driving or even driving when not under such influence of alcohol which is unacceptable. Some thing ought to be done to see that accidents are reduced on our roads; many of which accidents would be avoided if the motorists were in their senses before committing the offence. it disturbs to see a person in his senses overtaking in a corner, and others real overspeeding leading to loss of control of the vehicle hence an accident at the next moment.
William Kituuka
DRUNK MOTORIST KILLS 3 PUPILS, FEIGNS DEATH TO ESCAPE LYNCHING 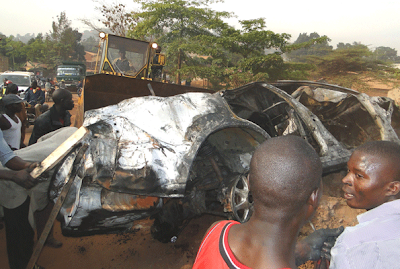 Lost to Mob: A murrum loader lifts the junk of Kateregga's car to clear traffic on Kinawataka road.
By Anthony Wesaka & Andrew Bagala
Posted Thursday, March 3 2011 at 00:00
The police are pressing murder charges against a suspected drunkard driver who knocked four people dead, including three pupils, and injured six others at two different spots on Kinawataka Road yesterday.
Tom Kateregga, alias Ssalongo Byoto, a traditional healer and a resident of Mutungo village, allegedly knocked dead Rashid Ssejange,7, Esther Nakanwagi, 10, Ayata Tushabe, 8, and James Mushikomo, 32, at around 7am.
Their bodies were taken to the city mortuary for a post mortem, while the suspect, who was briefly admitted to Mulago Hospital, is being held at Jinja Road Police Station.
Kampala Metropolitan spokesman Ibin Ssenkumbi said at the time of the accident, Kateregga was too drunk to drive.

‘Drunk beyond legal limit’
“We found out that Kateregga was drunk beyond the legal limit. The Inspector General of Police instructions are clear; whoever knocks people dead while drunk, we prefer charges of murder. It is the same charge we are to prefer for Kateregga,” Mr Ssenkumbi said yesterday.
By press time, Innocent Sserunkuuma, 4, and Martha Alowo, 7, were still admitted to Mulago Hospital with serious injuries. According to eyewitnesses, Kateregga allegedly first rammed into a stationary car before he knocked a pupil at Kunya Stage in Mbuya Parish and sped off.
Mr Justus Tukamushaba, an eyewitness, said the driver’s action prompted boda boda cyclists in the area to pursue him. “The boda boda cyclists pursued the speeding car towards Kireka, but the three adamant occupants refused to stop,” Mr Tukamushaba said.
A few metres away from the first spot, Kateregga allegedly knocked another seven people, including three pupils of Mbuya Infant Nursery School before the car overturned. Ssejange, Nakanwagi and Mushikomo were killed on the spot.
Ms Sarah Mugidi, the mother of Ssejange and the aunt of Nakanwagi, who had escorted them to school, fainted from shock after witnessing the tragic accident.
“She has been admitted to Goodwill Hospital in Mutungo,” Ms Mugidi’s brother-in-law, told this newspaper. Another eyewitness, Mr Musa Mulindwa, said occupants of Kateregga’s car freed themselves from the wreckage of the car in which they were trapped and ran away when they saw angry residents descending on the car.
Kateregga, though, remained trapped in.

Pulled out of wreckage
“Residents pulled him out of the wreckage and set it on fire. Unsatisfied by the act, they picked sticks and beat him,” Mr Mulindwa said. “Kateregga pretended to be dead, which probably saved his life, as the mob fled the scene for fear of judicial consequences,” Mr Mulindwa said.
Police patrol crew that arrived shortly found him unconscious. He was treated at Mulago Hospital before being handed over to the police.
Motor accidents are among the major causes of death in Uganda. At least 3,000 people die and 10,918 sustain serious injuries in motor accidents in Uganda annually.
Posted by williamkituuka.com at 7:12 AM