YOU WANT TO KNOW WHO MUSEVENI IS? 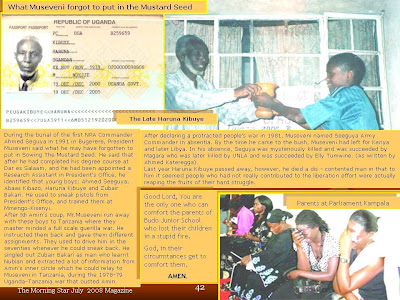 MUSEVENI WANTS TO GO DOWN WITH US ALL
By Ssemujju Nganda

Written by Ssemujju Ibrahim Nganda
Wednesday, 09 March 2011 20:46
The state-owned newspaper, The New Vision, has devoted the last couple of days to running stories that condemn the call by the opposition for mass protests against the just concluded general elections.
The elections returned Gen Yoweri Museveni as the President of Uganda for the next five years. Any opposition politician who has spoken against the protests has been given space in the paper, including the less influential ones.
But The New Vision’s anti-protests campaign has not taken away the opposition’s courage or Museveni’s fear.
More than any other Ugandan, Museveni fully understands how flawed these elections were, because he commissioned the fraud. He now must deal with the consequences of the rigged elections and his overstaying in power.
Museveni faces a similar situation like deposed Egyptian dictators Hosni Mubarak and Tunisia’s Ben Ali. These leaders had just won elections with 81% and 89% respectively.
But because they had manufactured the victories, they were both chased away like chicken thieves. Therefore, manufacturing a 68% victory is no insurance against dissent.
The truth of the matter is that Ugandans are fed up with Museveni’s maladministration, stealing of public resources, nepotism and the growing poverty.
Instead of dealing with the real issues causing frustrations, Museveni is busy running a media campaign against protests. But, of course, he is not sure whether the campaign will work, the reason he has heavily deployed militarily, mainly on Kampala’s streets.
Brutality, like you see in Col Muammar Gaddafi’s Libya, is the oldest way of dealing with dissent. Museveni has used both carrot and stick with perceived and real leaders opposed to his regime.
Both bribery and repression don’t offer a lifetime and can only buy a dictator some breathing space.
Museveni is so fearful of protests he’s spending most of his time planning how to prevent or foil them.
I have now been informed that a makeshift plan has been agreed upon between Museveni and his generals.
First, they must drum up the Al-Shabaab threat to blow up Kampala. Of course, after the bombings at Lugogo and Kabalagala, any opposition to dealing with Al-Shabaab is unwelcome. I have maintained that someone who bombed his way into power can always bomb to stay in it.
The Al-Shabaab equation helps Museveni deploy soldiers on the streets of Kampala almost endlessly. Kampala is almost held at gun-point now. In some areas there are more soldiers than civilians.
Speak against this heavy presence of soldiers and you will be dismissed as an Al-Shabaab sympathiser.
The international community, especially Americans, will never raise a finger against the heavy presence of soldiers on the streets; after all, they are the sole beneficiary of our presence in Somalia.
Kale Kayihura recently sent us CID officers to warn us to be more security conscious because Al-Shabaab wants to assassinate some key political leaders.
Our city now looks like a war zone. The only difference we have with Libya is the absence of gunfire.
I have also been told that some key military officers and opposition politicians will very soon be picked and locked up.
The fear is that if there is going to be any protests, they will be agitated and be led by opposition political leaders. Some of us are now about to be picked up on trumped-up treason charges.
Again, Kayihura keeps complaining that some of us want to set Kampala on fire. He has complained to some of our cultural leaders in Mengo. He has singled out the newly elected Lubaga North MP, Moses Kasibante.
Kayihura knows that we love Kampala more than he does and we will be the last people to set it on fire, but he must justify his actions. Kasibante is partly targeted because the state wants to rob him of his resounding victory in Lubaga North.
Army officers are targeted to prevent what has befallen Gaddafi. Museveni is fearing that when the protests gain momentum, some of his officers might surrender like has happened in Libya.
I am told that some senior officers who are on katebe are being targeted. The idea is to lock them up for at least one year. They will be linked to ADF or PRA rebel groups.
That is the situation we must brace ourselves for. The panicky Museveni is ready to go down with all of us.
The author is Kyadondo East MP-elect
Posted by williamkituuka.com at 1:35 AM