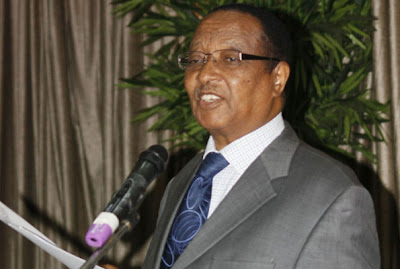 CAUTIONED: Prof. Nsibambi at the retreat.

Prof. Nsibambi is one man who surprises and shockes me to see that he looks comfortable working with the NRM Government at such senior level. There are people who like in the case of Uganda would say that their continued stay in office helps things. But given the level of decay in NRM, it really surprises that a man believed to be of high moral standing can stand to work with the NRM establishment. Nsibambi's father was registered as the first Ugandan member of the East African Revival, and how he feels working with the dirt in NRM, only God knows.
William Kituuka Kiwanuka
By Sheila Naturinda

Prime Minister Apolo Nsibambi yesterday said he would start cracking the whip on all ministries, government departments and agencies which have failed to comply with performance reporting.
In a retreat for ministers and their permanent secretaries in Kampala, Prof. Nsibambi said most of the agencies had failed to produce reports in a timely manner as required.
It is the first retreat this financial year 2010/2011. Cabinet retreats are done twice annually to discuss performances of sectors.
The retreats are also attended by chief administrative officers and local council five chairpersons.
Prof Nsibambi said reporting was not achieved for the semi-final annual report, with most ministries submitting their data six weeks later after the deadline.
“This must change,” Prof Nsibambi said. “It is unfortunate that today we haven’t named the culprits, next time we shall.”
“We should take to task the ministers concerned and their permanent secretary learns.” Prof. Nsibambi asked ministries take the courtesy of at least calling his permanent secretary explaining reasons for any delays.
“And that courtesy must be complied with,” he stressed. He also asked that ICT minister Aggrey Awori ensures that all ministries acquire the capacity to use technology in order to close up communication gaps.
“These days it is easier to receive a letter from London than from a ministry within,” Prof Nsibambi said. The performance reporting to be done by individual ministries and departments helps government avoid unnecessary duplication and the burden of reporting on performance.
Prof. Nsibambi tasked ministers to make sure their PS’ give planning, performance reporting enough space and the respect it deserves. Ministers whom Prof Nsibambi recently suspended were not invited for the retreat.
The retreat, closed to media coverage, is always held to assess the performance of government, ensure the government stays on track and continue to grow by improving the provision of infrastructure, services and governance.
The two-day retreat is clustered into three sessions; security justice and governance, rural and human development and the third being economic infrastructure and competitiveness.
Posted by williamkituuka.com at 12:50 AM