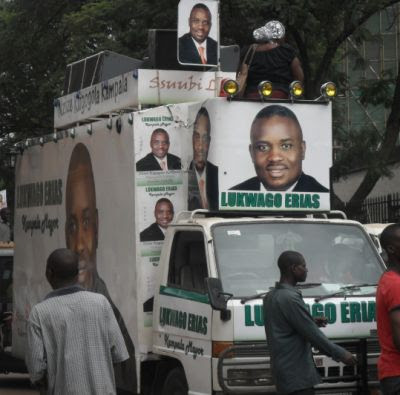 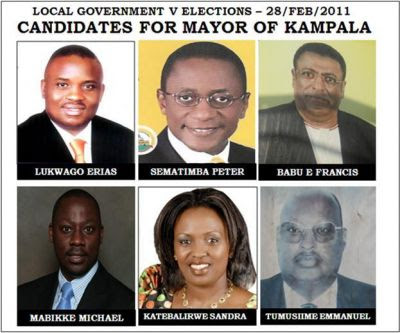 KAMPALA RACE - LUKWAGO CONFIDENT
Kampala mayoral candidate, Erias Lukwago has predicted victory in the mayoral elections. There are six candidates in the Kampala mayoral race; Lukwago (Suubi 2011), Peter Sematimba (NRM), Francis Babu (independent), Michael Mabikke (IPC), Sandra Katebalirwe (independent) and Emmanuel Tumusiime (FIL).
Ugandans will Wednesday elect municipality mayors and district chairpersons.
Speaking to the New Vision Tuesday morning, Lukwago said, "if they don't rig, I will win with 85% and if they rig I will have a 75% of the votes." He reiterated his wish to restore sanity in the city and rid of the corrupt leaders as well as uplifting Kampala to a better city.
The stiff competition is between Lukwago and Peter Sematimba. Sematimba whose party had an excellent performance in the presidential and parliamentary election in Kampala, is basing on this factor for victory. He promises to use his good connections with the government to improve the city.Kampala has a population of 1,597,900. Of these, 1,200,295 are registered voters. There are 138 polling stations in Kampala central, 263 in Kawempe , 218 in Makindye, 276 in Nakawa and 336 in Rubaga divisions.

Why Lukwago may win
The February 18, Parliamentary elections saw a big number of candidates who were fronted by Ssubi a local pressure group based in Buganda win in Kampala, Wakiso and Masaka. Lukwago is an independent leaning on Ssubi and may benefit from the wave of victories the Ssubi candidates like Moses Kasibante defeated Singh Katongole in Rubaga North got.
Besides, the victory of Lukwago's comrades like Betty Nambooze the MP elect for Mukono Municipality, Ibrahim Ssemujju Nganda of Kyadondo East, Medard Segona of Busiro East are likely to help Lukwago win. This group of the newly elected MPs has been behind him and has been campaigning for him since the campaigns started. The group is popular among the masses especially in the urban centers which may tilt victory in Lukwago's favour.
The recent victory by the six opposition party candidates in Kampala is a sign that the Opposition is still strong in the city and if Lukwago consolidates the Opposition's support in Kampala, he is likely to become the next Mayor.

Lukwago is also expected to benefit from his allegiance to the Mengo government. There are so many supporters of Buganda in several constituencies in Kampala and these are likely to cast their votes in Favour of Lukwago who has been at the forefront of defending the interests of the Kingdom in Parliament.

Ssematimba winning
Unlike in the previous elections, this time around NRM has performed excellently in Kampala. The party managed to get three Parliamentary seats in Kampala and the performance of its leader President Yoweri Museveni's also improved significantly. Ssematimba will benefit from the improved performance of his party in Kampala. NRM also has an established system of village and Parish leaders who will help him to guard the election and protect the results against rigging. If he only consolidates NRM's support in Kampala, winning the Mayorship will not be a surprise for him.
Ssematimba is also expected to benefit from the divisions among the opposition Mayoral candidates. The serious divisions are between Lukwago and Mabike who are leaning on the Inter Party Cooperation (IPC). If the two share the opposition party votes, chances are high that Ssematimba will defeat them. In the recent Presidential elections, President Museveni got 46.08% in Kampala and if Ssematimba gets the same number of votes, he may be the next Mayor of Kampala.
After losing the bid for the President, most of the Opposition Party supporters are demoralized. Many of them are likely not to turn up on Wednesday for the Mayoral elections a gap that is likely to be exploited by Ssematimba and the NRM camp to win the elections.
The personality of Ssematimba is a factor that cannot be undermined in the race. Ssematimba is the kind of person who will fit among any group of people, the youth, women and elderly being a pastor. It is this personality that he is likely to exploit to win the Mayorship. He garnered a huge number of votes in the 2006 Mayoral elections from Makerere University and other Institutions of higher learning across in the city because of the personality.
He has left a legacy behind as the Division chairman of Rubaga. He maintained good sanitation in the division. Many people in other divisions in Kampala always loved to be residents in Rubaga because of the good sanitation. Ssematimba is expected to benefit from the good services he has offered in Rubaga.

Compiled by Apollo Mubiru and John Semakula
Posted by williamkituuka.com at 11:05 AM