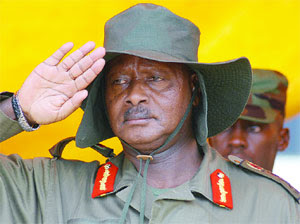 We need to learn from what we see going on other than come out with positions which are not workable today. It is true that the 1986 Museveni cabinet may be taken to have initially had the intent of moving towards National Unity, but the reading is clear on the wall. It becomes very hard for any body with good judgment to join a Government where the CEO is everything. When you are in such a Government when the Traditional Leaders Bill has been passed into law, can your voices be heard by His Excellency Museveni? Most probably no. If he decides to switch of CBS, will the intervention of political opponents help given that the NRM members almost have no opposition worth mentioning when bad laws and policies are being prepared. The having of a non effective Government for National Reconciliation will not and cannot help Uganda. What would have helped Uganda is for Museveni to leave peacefully, short of that, leave everything to God.
William Kituuka Kiwanuka


RELIGIOUS LEADERS FRONT FOR A GOVERNMENT OF NATIONAL UNITY
By Moses Mulondo
RELIGIOUS leaders and former presidential candidates are planning to hold talks with President Yoweri Museveni and ask him to appoint opposition leaders in his cabinet, sources said.
According to sources, the Uganda Joint Christian Council (UJCC) wants Museveni to form a government of national unity and appoint credible opposition leaders as ministers to check corruption in the country.
“There is work that is going on but it is not yet time for it to go to the press,” said Bishop Zac Niringiye, a UJCC member.
Museveni won the February 18 election with 68% followed by Forum for Democratic Change (FDC) leader Dr. Kizza Besigye. Democratic Party president Norbert Mao polled 1.86%, Uganda People’s Congress’ Olara Otunnu had 1.58% and the rest had less than 1% each.
When contacted, Mao said he was ready to meet the President for dialogue for the good of the country.
“It is important for the leaders of opposition parties to hold dialogue with President Museveni for the future of the country. The practice of winner-take-it-all is not good for the country,” Mao said.
The DP president revealed that former presidential aspirant’s had held several meetings with UJCC to discuss the dialogue between President Museveni and the opposition leaders.

Sources said the meeting were chaired by Nyringiye.
Asked whether he would accept to serve in a government of national unity led by NRM, Mao said: “That is one of the proposals religious leaders have fronted. I think it can be put on the agenda as long as that government of national unity is based on an agenda agreed upon, not just to give opposition leaders jobs.”
On what they expect as the fruits from the dialogue with Museveni, Mao said they want the Electoral Commission to be disbanded and replaced with a new one agreed upon by all political players.
The opposition leaders also want an independent international commission to investigate the 2011 electoral process to establish whether it was legitimate or not.
The opposition politicians argue that besides the massive rigging, millions of Ugandans were disfranchised; there was excessive use of money to compromise voters, intimidations and many other occurrences which to them render the process illegitimate.
They also want to convince the NRM government to accept to re-instate the presidential term limits in order to avoid life presidency.
“Without the presidential term limits and we can easily have a scenario of life presidency and the loss of hope for change in some Ugandans may compel them to resort to other means which may destabilise the country,” Mao argued.
Asked whether the FDC leader Dr. Kizza Besigye would accept to attend the dialogue with Museveni, Mao said: “Besigye has been part of these meetings with religious leaders and I think he will accept.”
The FDC party administrator, Wycliffe Bakandonda, confirmed that his party leader Besigye had attended the meetings.
But on whether the retired colonel is willing to meet Museveni for dialogue, Bakandonda said: “You should put that question to Besigye.”
Besigye has since last Wednesday been out of the country and was expected to be back to Uganda on Sunday.
Sources within FDC revealed that Besigye has been to Liberia, South Africa, US, and the UK to consult party supporters on the way forward.
The President’s press secretary, Tamale Mirundi, said the President was ready to meet leaders of opposition parties.
“If the President can fight for peace in Somalia, Burundi, Sudan and many other countries why not to have dialogue with the opposition for the good of the nation? Even immediately after 2006 elections the President met opposition leaders. I am sure the President will not refuse to meet them,” Tamale said.
He, however, ruled out the possibility of the President accepting the proposal of a government of national unity.
“A government of national unity only applies where no party was able to win significantly.
“But in this case, the NRM won both the presidential and parliamentary elections overwhelmingly,” he argued.
On the opposition grievances over electoral malpractices and the unfairness of the process, Tamale said: “You cannot solve those grievances through talks. Let them go to courts of law. The Constitution provided a solution for such concerns.”

The National Resistance Movement and its main rival the Forum for Democratic Change have separately dismissed the idea of a coalition government ahead of the 2011 polls.
NRM Chief Whip Daudi Migereko led the NRM side to a recent tête-à-tête with other political forces, including the FDC, said his party’s intention is to win the 2011 polls “decisively”.
The dialogue organized by Accra based Institute of Economic Affairs- a Think Tank famous for organizing Presidential Debates between Ghana’s bitter rivals in the last election- was assisted by a Hague based Dutch NGO- the Netherlands Institute for Multiparty Democracy.
On Friday the European Union head in Uganda Ambassador Vincent De Visscher said talk of a coalition government in 2011 was speculation saying of more concern would be the cohesiveness of the political opposition.
“From a donor view point we are interested in a clean process and a level playing field. There are concerns about trust in the Electoral Commission because elections are like a football march where if the referee is discredited the results cannot be credible” he said adding that donors were “absolutely not” planning a government of national unity.
He was responding to a report carried in the Weekly Observer about a donor driven plot for a power-sharing deal arising out of the Ghana meet.
The report said fears of violence in 2011 had caused donors to moot the idea of a coalition.
But Mr. Migereko also said no discussion over a coalition had taken place in Ghana but that NRM had an open door to dialogue about the “rules of the game”.
“Politics is about competition and we are working hard to win” Migereko said when asked directly about the slow slide in the popularity of NRM Chairman Yoweri Museveni.
Those who predict violence say it would be difficult for him to win the next election/
Mr. Museveni has consistently lost by 10 % in the last three major elections [75% in 1996, 65% in 2001 and 59% in 2006]. All things holding steady he would be in a statistical red in the next poll.
Migereko says NRM is confident it can “reverse” the trend.
FDC reject a Museveni partnership
FDC National Chairman Sam Njuba, who like FDC leader Kizza Besigye have worked closely with Mr. Museveni but fell out before the return of multiparty democratic competition, dismissed the idea of a government of national unity.
“No. Never! That’s totally unacceptable. Either we win rightly or lose rightly. While we have not discussed it within FDC I would oppose it. Ha-ha! Working with Museveni? He is a crook. I can’t stomach the thought!” Mr. Njuba said emphatically in a phone interview on Friday morning.
He warned that donors should not “reward” losers of elections with the option of staying in power. “My concern is however that the opposition parties are not so united” he said.
But Migereko who said the Ghana talks were about agreeing to “the rules of the game” earlier on added that cabinet proposals on electoral reforms would not include a suggestion that a “simple majority” should determine the winner of the next elections.
The reforms will be tabled before parliament soon he said. “Dealing with a simple majority is always easier” he said adding that it cannot be ruled out that some NRM members of parliament “may privately seek to amend [the 51+] rule”.
Abolishing the rule would require a constitutional amendment of article 103 [4] which currently require that a winner of the presidential race must win “more than 50% of all the valid votes cast”. A subsection provides for a re-run [see analysis].
Mr. Njuba says FDC would not be surprised if the NRM moved towards the amendment of the constitution because its candidate would likely be unable lose the election.
“We won’t be surprised if that too is pushed down our throat but we will oppose it” he said.
Posted by williamkituuka.com at 6:22 AM