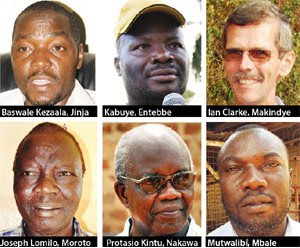 MAYORAL elections conducted yesterday saw most incumbents retain their seats. Partial results also showed that the opposition maintained a strong a grip on urban centres.
The exercise that was conducted in the 22 municipalities and the five Kampala city divisions, was more peaceful than the district chairpersons’ polls.
In Bushenyi/Ishaka municipality, Jackson Kamugasha (independent) retained his seat. Business came to a standstill when his supporters jammed the streets to celebrate his win.
Declared results showed that Kamugasha scored 8,342 votes, while his closest opponent, NRM’s Jaffari Bassajjabalaba, got 3,596 votes.
Shouting ekijegyere twakicwa (meaning, we have cut NRM’s chain), Kamugasha’s supporters jubilated in a convoy of more than 70 vehicles and boba-bodas.
They drove from Ishaka town up to Nyakabirizi town under a heavy down pour.