UPE AND USE A SIDE; GOVERNMENT MUST COME UP WIT A STRATEGY TO SEE CHILDREN EAT FOOD

Uganda Government wastes money in non-issues as the population status deteriorates. It is unacceptable that with a lot of land not put to agricultural use, the country that has capacity to grow food and feed all its population while a big surplus is for export has many of its leaders wasting the time of the future generation as they get into politics which does not help the future generation. In around 1970's a child could be given 20 strokes aof the cane and such a child would move on well thereafter, today if you mess with someone's child and give say 10 strokes be sure of the consequences. Uganda leaders are taking us for granted instead of delivering services they spend so much time politicking. We have the land and man power resources, we want a strategy to feed all the children of Uganda. 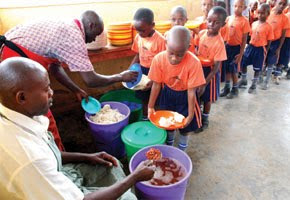 Pupils of New Jay Bee International Primary School in Mbarara being served lunch yesterday. Schools across the country are choking under the weight of increased commodity prices.

By Conan Businge
SCHOOLS across the country are choking under the weight of the increased commodity prices; with some rationing food and others on the brink of closing early this term.
The high cost of living has made it very expensive for some schools administrators to effectively remain in operation.
In some schools, the number of meals and amount of food has been reduced, while in others, co-curricular activities have been scrapped to save money for food. Others have removed some items from the menu.
Government is in the process of reviewing the budgetary allocations to all levels of education in the coming financial year. The education ministry, according to its publicist and under-secretary (finance) Aggrey Kibenge, is “aware of the hike in commodity prices, and we are concerned.”

What do school heads say?
Aziida Nsubuga, deputy head mistress, Old Kampala SS
We had budgeted to spend sh266m on food for the entire year but the actual expenditure will be above this. All allowances have been suspended due to hiked prices for essential commodities. We used to give students meat once a week but this has been stopped.
Agnes Ssebayiga, head teacher Makerere College School
The menu has not changed. We expected commodity prices to increase and budgeted accordingly. We are also getting a lot of supplies on credit and will pay later.
Dorothy Kiggundu, deputy headmistress, Mengo SS
We have 3,000 students and 180 staff members to feed. The expenditure has increased yet we have not increased school fees. But we are lucky to have a school farm where we get some food to supplement.
Margaret Watuwa, headmistress kololo SSS
We used to spend sh2m on providing lunch to 520 A’ level students for a fortnight; but now our expenditure on food has shot up to sh3.2m. We have reduced on the meat and matooke we prepare for teachers from twice to once a week.
John Buinza, head of Shimon Demonstration School
We have reduced on the food rations. The education ministry requires that every UPE child in P3-P7 pays sh10,000 for lunch and sh5,500 for pupils in nursery. If the situation continues like this, we might begin serving the kids porridge for lunch
Ahmed Baagala, deputy head teacher Kololo High
We used to buy a kilo of maize flour at sh800 but the price has doubled. We spent sh1.3m on posho and beans for the first half of this term but we are going to pay sh2.6m in the second half.
Muhammad Kigere, DOS Hamdan Girls High School
We stocked our food supplies last July. We have rice, beans and maize flour in stock. So we are still relying on the old stock. We have not
started experiencing the pinch.
Claire Nduhura, Headmistress City High School
We are finding it a little bit hard to feed students. Government schools are the most affected because they cannot easily increase school fees. Judging from last year’s expenditure, we had estimated to spend sh34.5m on food this term but already sh28m has been spent yet we still have another month to go. We used to give them soya peas twice a week but we have failed, due to the high prices.
Florence Akello, head teacher St Mary’s Magadalene Lira
l have failed to get the type of beans my students like.The School has 884 students and they eat 140 kg of posho everyday. Next term, we shall stock beans and posho in large quantities
Charles Otim, deputy head of Nkonkonjeru Primary School
A sack of maize flour that used to cost sh100,000 is twice the amount. We have had to ration food for our pupils to avoid wastage. As a result of higher prices, there might be a slight increment in fees.

FOOD PRODUCTION IN UGANDA
Source: http://www.uganda-visit-and-travel-guide.com/food-production-in-uganda.html
The Contribution of Uganda People's Culture to Food Production in Uganda
In general, food production in Uganda is favoured by both a congenial climate and a diverse environment, with some parts of the country able to produce two crops per year. Some places produce up to three seasons like the Bafumbira in south western Uganda.
A variety of both indigenous and non-indigenous plant and animal foods are grown. Although Uganda is generally regarded as food self-sufficient, not all parts of the country are food secure, and may suffer deficiencies of particular crops or at particular times of year For example The Karimojong in North Eastern Uganda who live in a semi arid and live a nomadic life.It will be very hard for you to understand all about Uganda food without knowing the culture of the people of Uganda.
Uganda is composed of many tribes and every tribe practices its separate culture and for that matter the food they produce, corresponds with the nature of their culture. For example in Northern Uganda where we have the Karimojomg who are cattle keeper and living a nomadic sort of life, will produce the types of food that is different from other tribes in Uganda. So, on this page we shall guide you to know how Uganda food goes hand in hand with culture.
Uganda’s population is composed of diverse African ethnic groups. In addition, there are people of Asian, American and European descent. The present-day food culture has organically developed over time through people’s interaction with each other and with the environment.
The environments where people live and their ancestral origins influence food culture and practices, with foods and food cultures passed on from one generation to another. Thus, the food culture in Uganda has its roots in the diversity of its people, their cultures, and the environment. 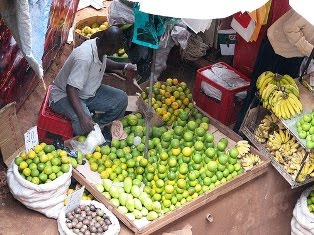 The link between food production in Uganda and culture
• Culture in its broad sense is the way of life of a particular society. It refers to the roles, uses, position, and symbolism of individuals, ideas and objects such as food, in all aspects of a society; including beliefs, values, norms, taboos, institutions, language, rituals and art. Some cultural practices can directly or indirectly influence the food security of a given society as culture prescribes the interactions between people, between people and land, and between people and food.
• Most families in Uganda, apart from those in urban areas, produce their own food for home consumption and the rest for sale . The majority families in Uganda have three meals a day: a light breakfast (composed of a cup of tea or porridge), lunch and supper. Supper is usually the main meal of the day.
• If we can take an example of the Iteso people, the day typically starts with a drink of an opaque millet beer ( ajon) and a baked sweet potato ( amukaru) or cassava, eaten either at home or in the field during work.
• Scientifically, food is regarded first and foremost as a necessity to support physical activity and survival, and the nutrition and health of the people. However, food also plays a major secondary role in socio-cultural activities and to a certain extent defines ethnic identity. Within different ethnic groups, different foods have particular meanings and symbolism attached to them. For example, within the ethnic groups in the central and western parts of Uganda, insects such as grasshoppers and white ants are eaten as a delicacy and can be preserved for use until the next season, thus contributing to the food and nutritional security of such communities.
• Among the pastoral ethnic groups like the Banyankole, Ateso and Karimojong, milk, meat, blood and milk products are central to their food culture. The Karimojong for example, bleed healthy cows from the jugular vein. The blood is collected in a calabash and mixed with milk before cooking. The cooked blood and milk meal is considered a delicacy, and mainly reserved for the men. Among the Banyakole however, bleeding of cattle for the same purpose is a dying practice as farmers adopt modern animal husbandry practices and non-indigenous cattle breeds.

Nonetheless, the Banyankole still collect blood ( orwamba) from slaughtered animals, which is cooked on its own or added to a meat stew.
• Other ethnic groups also hold particular foods in high regard. For example the Baganda value the banana ( matooke) so highly that the word for food ( emere) is largely synonymous with banana. Among the ethnic groups in the western and south-western parts of the country like the Banyoro, Batooro, Bakiga and Bagungu and the Nilotic and Sudanic people in the north and north-west, cereals such as millet and sorghum, and roots and tubers such as potatoes and cassava, are treasured. Thus on special occasions such as marriage ceremonies, special meals or delicacies like stiff millet porridge ( atap or akaro), millet or sorghum beer and obushera, a non-alcoholic malted and fermented drink, are served. Among these ethnic groups, a woman’s culinary skills are often judged by how well she makes akaro or atap.
• Although differences in ethnic food habits do exist, they have changed over time as people migrate, intermarry and interact. This has resulted in an adoption of new cultures and the modification of existing ones. For example, with the advent of the early traders and colonialists new foods such as spices, non-indigenous fruits, wheat, rice and maize were introduced.
• By the 1960 leavened bread had become popular because its ingredients were familiar and readily available. Maize and rice are other examples of introduced foods, which in various forms have increasingly contributed a major proportion of peoples’ diets. Such foods have therefore been adopted and acculturated within the Ugandan cultural setting to the extent that they are likewise subjected to indigenous traditional cultural food preparation practices such as malting, fermentation and brewing.
• Ugandan society is predominantly strongly patriarchal. Thus while women grow most of the food, they do not own the land and in some cases they have to obtain permission to access land for food production. At times women do not even have full rights to the food they produce. Cultural issues also influence nutrition since the distribution of food and food taboos are culturally determined along age and gender lines.
• The household unit is usually an extended family with men having full authority in the home. Women have the primary responsibility for childcare and food production while contributing to cash crop agriculture. Girls, mothers and boys provide the labour in the household and on the household farm. Meals are prepared by women and girls, while men and boys of over twelve years are culturally precluded from entering in the kitchen.
Posted by williamkituuka.com at 11:49 PM