WHEN WILL THE NRM EVER GET ASHAMED OF DOUBLE STANDARDS?

Had Sematimba made it to become the City mayor, chances are that the police would not have interfered with the arrangements of celebrations. But because the opposition took the day, Government is out to fight any victory celebrations. This is double standards. The NRM should stop imagining that we the governed are idiots. We simply see them and pity them because the overstay in power is making them behave very arrogantly and it is a shame. can all the people of Uganda be subject to similar treatment. I am yet to learn of the measures where Sematimba was put to task to explain his role in the rigging an all the developments which led to the cancellation of the polling. There is a lot of tax payer resources involved in these exercises, but the NRM unfortunately is showing a bad example. We deserve better. The people of Uganda may have little to do given the iron hand they are governed with, but be sure, the NRM will be judged accordingly for its sins, as some of the past regimes are being judged. It is better to clean up than keep arrogant.
William Kituuka Kiwanuka
CHAOS AS POLICE TEAR GAS LUKWAGO 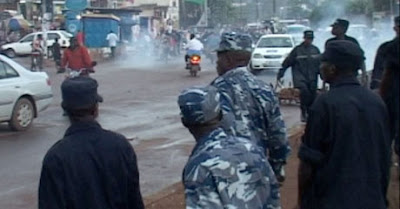 Posted Thursday, March 17 2011 at 00:00
Police last evening fired teargas and gunshots to block a convoy of Kampala Mayor-elect Erias Lukwago’s supporters, who were celebrating his victory.
The 6pm fracas at Wandegeya started after the police blocked Mr Lukwago’s procession that was coming from Bwaise on Bombo Road and headed to the city centre.
Whereas the police wanted the group to divert and use the Makerere-Nakulabye route, Lukwago’s supporters insisted on going straight to town using Bombo Road, prompting the police to fire tear gas to disperse them.

Thanking gone wrong
Mr Lukwago, who was atop a car waving to his supporters, was driven off unhurt, while one of his chief campaigners, Mr Ssemujju Nganda, engaged the police in an argument.
The mayor-elect later told Daily Monitor that the procession was meant to thank the electorate for voting for him in the just- concluded elections. It was to end with a rally at Nakivubo Blue Primary School.
katte said the fracas resulted from failure by Mr Lukwago’s supporters to adhere to agreed routes.
“The Police accepted Mr Lukwago to hold a rally at Nakivubo Blue Primary School and his supporters from Kawempe side were given gazetted routes to connect to the venue but when they reached Wandegeya, they decided to change yet the people were very many and it was rush hour,” he said.
He said the police action was prompted by supporters who turned rowdy while the Wandegeya police boss was still advising Mr Lukwago to follow the agreed route.
“After teargas was fired at the supporters, the situation normalised because they accepted to use the agreed routes. There were no arrests and no injuries were registered,” Mr Ssekatte said.
But last evening, although calm had returned to Wandegeya, heavy police presence was visible.
Posted by williamkituuka.com at 11:57 PM