SHOULD THE PEOPLE JUST SIT BACK AS GOVERNMENT MACHINERY ABUSES THEIR RIGHTS? 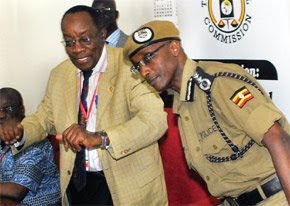 Kiggundu (left) and Kayihura addressing journalists in Kampala yesterday
By Henry Mukasa
and Henry Sekanjakko
THE call for mass protests to challenge the results of the presidential elections is a declaration of war on the Government, the Inspector General of Police has warned.
“The mass demonstrations will not be peaceful. Intelligence information has shown that the protestors want to burn buildings, Police stations and personnel. It is a declaration of war on the Government,” Kayihura said.
The Police boss made the remarks on Monday at a meeting with journalists and Electoral Commission (EC) staff. The meeting was aimed at briefing the media on the preparations for the municipal, mayoral and youth parliamentary elections.
Kayihura was asked to comment on statements by the leaders of the opposition that warnings by the President and the IGP to shoot down protestors were “kicks of a dying horse.”
He observed that the Constitution allows peaceful demonstrations but maintains that the right should not infringe on the rights of other citizens.
The police chief also said that the Police retains the Constitutional right to regulate demonstrations.
“The fact that the opposition has not notified the Police causes suspicion. We shall not allow anyone to destablise the peace of the country. The mass protests are not demonstrations envisaged by the Constitution.
Let them not play with words,” Kayihura said.
On February 24, four former presidential candidates called for mass protests to dispute what they termed as a “sham election” that saw President Yoweri Museveni win the February polls.
Kizza Besigye (IPC),Olara Otunu (UPC), Norbert Mao (DP) and Samuel Lubega (independent) urged district party leaders to organise and address peaceful public rallies.
Badru Kiggundu, the EC boss, referred to the declaration by Besigye on the election results as mere “gymnastics.”
“It has no legal force of the law. They are lucky the freedom in this country allows you to do anything, provided you don’t coerce others,” Kiggundu said.
Kiggundu announced that the mayoral elections would be held on March 14.
He asked politicians not to deploy any militia groups (kanyamas) at polling stations.
Kayihura blamed political leaders for the violence that marred the Kampala mayoral elections, saying they chose to work with hooligans instead of the Police.
He confirmed that the Police had arrested Juma Ssemakula a.k.a backfire, the leader of Kibooko Squad (stick-wielding men), and 40 others.
Kayihura, advised journalists to relay complaints over election violence to the Police public relations office or Professional Standards Agency.
“I haven’t got a report on the violence inflicted on journalists during the polls,” Kayihura said as journalists murmured in disagreement.
Posted by williamkituuka.com at 7:26 AM