REAL NEED TO REPLACE THE CANDLE 'TADOOBA' IN UGANDA 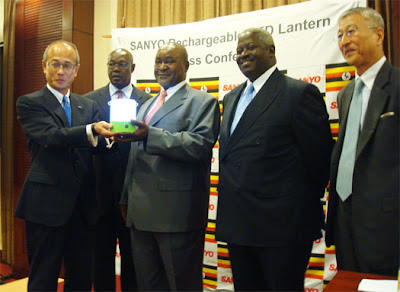 Vice President Gilbert Bukenya (centre) and Japanese ambassador to Uganda display a solar LED lantern that will replace use of tadoobas in villages at the launch at Kampala Serena Hotel
The use of kerosene lamps commonly known as tadooba by millions of Ugandans in rural areas will be phased out and replaced by Light Emitting Diode (LED) solar lanterns launched in Kampala recently. It is estimated that more than more than 4 million Ugandan households currently using tadooba will adopt the new solar lanterns. The tadooba remains a health risk due to its harmful smoke emissions as well as being a fire hazard.
According to a 2005/6 Uganda National Household Survey, 16% of the household expenditure of a typical Uganda family goes towards fuel and energy. “Most of this expenditure goes to the fuel service stations, where seven out of every 10 Ugandans buy paraffin to fuel their tadooba. Each household spends an average of Ush180000 (US$92) per year on paraffin, making it the only largely affordable means of light in rural homes despite the fire risks it poses its users.
At the launch of the LED solar rechargeable lamps, Uganda’s vice president Prof. Gilbert Bukenya symbolically blew out a lit tadooba lamp to signify that darkness must be kicked out of the country. This innovation will save many rural schoolchildren from reading their books using dim tadooba light.
Japanese electronics powerhouse Sanyo Electric company, manufacturer of the solar LED lantern gave 250 rechargeable lanterns to the government, which Prof. Bukenya said would be distributed free of charge to rural communities not connected to electricity.
According to Keiichi Kato, Japanese Ambassador to Uganda, the solar lanterns are a new dawn in the lives of millions of Ugandans and more poor people in the world who rely on the tadooba to light their homes.
Prof. Bukenya, who promised to end the use of tadooba six years ago said, “Because of this product’s utilization of free and clean solar energy, there is no fear of health damage due to harmful smoke produced by kerosene lamps and fuel costs can also be reduced making it economical.”
A World Bank report on solar lanterns published in August noted that 1.6 million people, mainly children, who live in Africa, India or South Asia, die due to diseases related to indoor pollution every year.
“The tadooba’s smell and smoke are a danger to people’s lives on top of the fire risk it brings to the household. It also contributes to global warming by emitting carbon dioxide,” said Dr. Izrael Da Silva, a senior lecturer in the department of electrical engineering, Makerere University.
The solar LED lantern can be recharged using ordinary electricity or car batteries. It gives the light of an ordinary electric lamp and it is cheap to maintain. However, the cost may be prohibitive to the poor if the government does not subsidise the product.
Richard Kanyike, the manager of Solar Energy Uganda Limited, Sanyo’s distribution agent in Uganda, said a single lamp will go for Ushs120000 (US$61.3), which is high as over 36% of Ugandans live on less than a dollar a day. But the Vice President pledged to find ways of reducing the cost per unit by about half.
In a country where over 80 per cent of the population lives in rural areas without electricity, this product comes in handy. It is estimated that only 10% of Ugandans have electricity in their homes, of which 33% are urban based.
Posted by williamkituuka.com at 9:25 PM