The death of Okello due to mistaken identity is one incident that was overdue to happen given that many people have the same name as this case. This is a precedent which calls for a legislation to have all the newly born to be given names which are made up of three names to give one's identity. So sad that the 'insane' woman did the unthinkable. Those are the people we have.
William Kituuka Kiwanuka

CASE OF MISTAKEN IDENTITY ... AS THREE YEAR - OLD IS KILLED IN PLACE OF CLASSMATE 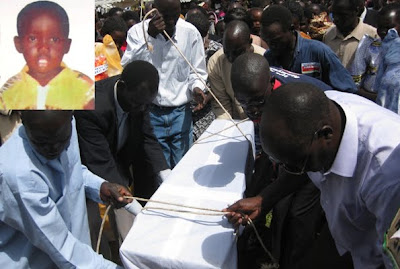 Mourners lower Okello’s body into the grave on Sunday. PHOTOS BY HUDSON APUNYO
By Hudson Apunyo

Posted Wednesday, March 30 2011 at 00:00
Lira
He is gone, sent to an early grave by a stranger, apparently hired by a jilted lover who in the fit of jealousy, plotted to end the life of her rival’s child. In this callous case of mistaken identity, and as fate would have it, the assailant picked the wrong child, and allegedly murdered him.
The three-year-old boy shared a name with the other child, who apparently was the real target of the assailant. This is the sad story of Steven Okello, whose tender life was cruelly ended in a feud his family knew nothing about.
Police and relatives recovered his lifeless body tucked in a swamp in the outskirts of Lira town last week. Four days later on Sunday, inconsolable relatives and mourners buried Steven, in an emotional send off. A cloud of grief shrouded the air at the burial place as despair descended upon hundreds of mourners, overwhelmed by the stark reality of the misfortune.
In a tragic plot, the deceased was picked from Montessori Nursery School in the heart of Lira town by a boda boda cyclist. The motorcyclist had produced a letter to the unsuspecting school administration, purportedly written by the child’s mother Jacky Ejang.
The letter stated that the child was sick and was being taken to hospital for treatment. “He is not the one who usually picks me from school, I don’t know this boda and I am not sick,” sources, who witnessed how the child was picked but were not willing to be identified, narrated how Okello instinctively protested before he was ingeniously taken away to meet his death.
When his parents found out that he was missing, the school authorities confirmed that there were two pupils in the same class sharing the name, Steven Okello. That is how the mishap occurred. The deceased was mistakenly killed in the place of his namesake. They called the parents of the other Okello, Tony Otuku and Jacky Ejang, who promptly accused their son’s step mother, Pamela Atyang, of the heinous crime.
Mr Otuku, a driver in Lira town, sent his condolence to the family of his son’s namesake, but thanked God for sparing his son’s life. The driver disclosed that his wife had threatened to harm his children whom he had with Ejang. “So I am sure, my wife picked and killed another child but her target was mine,” he said.
Yesterday, Ms Atyang, 23, who resides at Akite Nino Village in Lira Municipality, was produced in court. The young woman appeared before Grade Two Magistrate Edward Etot and was charged with murder.
Court heard that Atyang and others still at large on March 22 killed Okello. The Magistrate’s court had no jurisdiction over her case, and Atyang could not take plea and was remanded to Lira Central Prison until April 12 when she will reappear for mention of her case.
Steven’s grandfather Alele Okello said he alerted the police the evening his grandchild went missing, but police reportedly said it was already late and they would only be able to launch a search for the missing child the following morning. Alele now wishes if only police had listened to them and acted, the child would have survived.
Lira Resident District Commissioner Susan Akany accused the school of laxity and warned proprietors that they risk their institutions being closed if they do not take the security of children seriously. The Regional Police Commander Central North, Mr Raymond Otim, also assured mourners to be hopeful as he will do all possible to bring the suspects to book.
Posted by williamkituuka.com at 12:50 AM