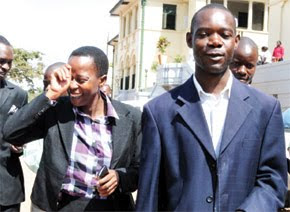 By Anne Mugisa
and Andante Okanya
THE Judiciary has disowned the recount of the Rubaga North constituency votes.
The recount, which was ordered by Mengo Chief Magistrate Philip Odoki after a High Court injunction, handed victory to Singh Katongole who had lost to Moses Kasibante in the original poll.
The Judiciary has also declared an investigation into the saga to “establish what happened and bring to book whoever is responsible,” the Judiciary spokesperson, Erias Kisawuzi, said yesterday.
He said the Judiciary is the custodian of justice and and, therefore, will not condone or be privy to any illegality.
“Court orders are not issued in vain and whatever happened at Mengo from the beginning to the end was illegal and of no consequence as the subject matter will be entertained by the High Court on Thursday at 9.00am,” Kisawuzi stated.
“Following issuance and service of the High Court order to stay the Chief Magistrate’s order to recount the votes from Rubaga North constituency, the exercise was supposed to stop.
"But in complete defiance, the exercise continued. The exercise was, right from the beginning until completion illegal and of no consequence,” he added.
The statement disowning the Mengo vote recount was issued following a meeting by senior officials of the Judiciary over the Magistrate’s Court decision.
Katongole was declared winner at 2:45am yesterday by Kampala returning officer Molly Mutazindwa, following a Magistrate’s Court order.
Kasibante’s lawyers Erias Lukwago and Medard Lubega Ssegona had secured a High Court order stopping the recount.
According to the Mengo Magistrate, Phillip Odoki, the High Court order came after the recount had started and it could not be stopped.
The Magistrate’s Court had ordered the recount on Friday February 25, but the High Court halted the process, saying there was a matter relating to it that had to be handled on Thursday.
“It is necessary to maintain the status quo. An interim order is, therefore, issued pending outcome of the main application,” a registrar of the High Court said on Monday.
Electoral Commission chairman Eng. Badru Kiggundu denied defying the High Court order. He said he did not have the full story of what happened.
“But what I can say is that the second order was not issued on the institution (EC) but an individual. As far as we were concerned, the recount went on and the returning officer did what she was supposed to do,” Kiggundu said.
In the February 18 polls, Katongole who is also the NRM deputy treasurer got 18,595 votes against independent candidate Kasibante’s 24,054. There were seven other candidates in the race.
Asked whether this could be a case of contempt of court, Kisawuzi said there could be other issues, and that it was why an investigation has been ordered.
Meanwhile, Katongole’s lawyer, Asa Mugenyi, asked the High Court to give him time to defend his client. He said he had been served on Monday afternoon and he did not have time to prepare.
However, Ssegona said Katongole and his lawyer pushed for a hasty recount despite an order to the contrary by the High Court so that his name could be published in the Uganda Gazette.
He asked court to stop the EC from releasing the name of the elected MP for publication until the Rubaga North issue is disposed of.
Posted by williamkituuka.com at 7:21 AM