I LOVED BEING ASSOCIATED WITH FATHER LOURDEL AT SCHOOL

It is good news to learn that the remains of Father Lourdel are to be buried Sunday, 5th March 2011. When I joined St. Mary's College Kisubi, I was sent to the Green House; Lourdel. This House was good and I don't regret it more so having been baptized after Father Lourdel whose mission is emulated by all God loving people.

By Juliet Lukwago
THE priest who started the Catholic church in Uganda, Fr. Simeon Lourdel, commonly known as Mapeera, will be buried tomorrow.
His preserved body has been kept at Rubaga Cathedral in Kampala since 1890, when he died.
The Archbishop of Kampala Archdiocese, Dr. Cyprian Kizito Lwanga, said Fr. Lourdel will be buried at Mapeera-Nabulagala Parish near Entebbe, where he first spent a night when he arrived in Uganda on February 17, 1879.
At the parish, a tree that Fr. Lourdel accidentally planted still stands todate.
e had carried a peg from Tanzania and used it to erect a tent. On the following day, he proceeded towards Kampala and left the peg, which sprouted into a tree.
To-date, the tamarind tree, unlike others of the same species, has never produced flowers or fruits, which has puzzled scientists and lay men alike.
According to the Parish Priest, Fr. Richard Nnyombi, this was their first mission from March 7, 1879.
Fr. Lourdel and Br. Amans had left Marseilles in France with the first caravan of White Fathers on April 22, 1878 and landed in Zanzibar on May 30.
From the south of Lake Victoria, they went northwards across the lake to explore the situation in Uganda. They landed on the Kigungu peninsula and spent their night at Kisubi.
When Kabaka Mutesa learned of their arrival, he ordered that they be taken to Kitebi, three miles from Rubaga.
They spent fifteen days there and the Kabaka called them again. At the palace, Fr. Lourdel informed Muteesa that they had been sent to establish a Catholic mission in Uganda.
Muteesa consented to the coming of the Catholic missionaries and promised to send canoes to fetch the rest of the group.
Later, Muteesa gave them a better place at Nabulagala-Lubya, where they established a mission and celebrated their first mass in Uganda.

Who was Mapeera?
Siméon Lourdel (Mapeera) was born at Dury, France, in the Pas de Calais, of a devoutly Christian peasant family. His parents, Charles-Albert and Esther-Honoré, had four other boys. All five attended the Junior seminary.
In 1870, Fr. Mapeera presented himself at the major seminary, after helping his father bring in the harvest. He was rejected.

Determined to prove that his priestly vocation was genuine, Siméon attended Saint Bertin College at Saint-Omer.
His performance was so good that he was accepted by the Arras Major Seminary in 1872.
During his philosophy studies, Father Charmetant, a Missionary of Africa, came to speak to the seminarians, and two classmates, Bridoux and Toulotte decided to become missionaries. Lourdel was struck by their decision.
His parents consented to this at the end of 1873 and his application to the Missionaries of Africa was accepted.
Fr. Mapeera arrived at the novitiate in Algiers in February 1874 and received the habit of the Society on March 25th.
He was one of a group of ardent young men, whose high ideals were nourished by the personality of the founder, Charles Lavigerie. Like them, he was ready for any suffering, the probability of a premature death and even the possibility of martyrdom.

On February 2, 1875 he took his missionary oath and commenced theological studies.
Lourdel was profoundly affected by the massacre of three fellow missionaries, Paulmier, Menoret and Bouchand, in the Sahara desert in 1876, and this event increased his fascination with martyrdom. On April 2, 1877, Lourdel was ordained priest at Algiers. He was then twenty-four years old.
Fr Simeon Lourdel was known to all as “Mapeera”, which is derived from the French phrase “Mon Pere”, my Father (priest).

A FEW BIOGRAPHICAL NOTES
The death of Father Lourdel occurred at an important juncture in the pre-colonial history of Buganda. Torn by religious and political rivalries, this kingdom had fallen prey to the colonial ambitions of Germany and Great Britain. Unfortunately, the death of Father Lourdel coincided with the departure of Bishop Livinhac (1846-1922), Vicar Apostolic of 'Victoria-Nyanza' Vicariate, newly elected Superior General of the Society of Missionaries of Africa. The death of one and the departure of the other at that point were an incalculable loss for Catholics. They had been their most able and also their most loved leaders.
The diary of Rubaga Mission contains an account of the death of Father Lourdel. It consists of some very moving pages of a little-known period of missionary history. It is of interest to revisit these pages, aware of the progress achieved in the area of the history of mission in Equatorial Africa in recent years.


Father Lourdel, baptised Siméon, was originally from the diocese of Arras in the north of France. He was born on the 20th December 1853 in the village of Dury (Pas-de-Calais) into a well-to-do and very Catholic farming family; one of his brothers would become a Carthusian. After his primary schooling at the 'Séminaire des Saints Anges' at Arras, he continued his secondary studies at the junior seminary of the same town. Expelled for lack of discipline, he completed his studies at Saint Bertin College at Saint Omer. In his youth, he read the life of Father Vénard (1829-1860), who died a martyr at Tonkin (Indochina). It awakened in him the desire to become a missionary, a desire that he would later share with his friends at Saint Bertin College, Léonce Bridoux (1852-1890) and Anatole Toulotte (1852-1907). The three friends would enter the Society of Missionaries of Africa after a meeting in 1873 with Father Charmetant (1844-1921), a Missionary of Africa sent to France to look for candidates for the plan to evangelise Africa, launched at Algiers by Archbishop Lavigerie (1825-1892) in 1868.

After going through the various stages of his training with the Missionaries of Africa, Lourdel, then a major seminarian, was ordained a priest on Easter Monday the 2nd April 1877 at Maison Carrée, near Algiers. At the beginning of his priestly life, he taught for a few months at the junior seminary of Notre-Dame d'Afrique, and then in November 1877, he joined the community of Metlili in the Sahara. The following year, Archbishop Lavigerie appointed him a member of the first caravan heading to Equatorial Africa. He formed part of the group consisting of Archbishop Livinhac (1846-1922), destined to evangelise the peoples of the Lake Victoria region. He and Brother Amans Delmas (1852-1895) were the first to arrive in Buganda on the 17th February 1879, after a journey lasting 10 months. Their caravan had left Marseilles on the 17th April 1878. From then until his death, Father Lourdel evangelised the Baganda with a view to founding a Catholic kingdom among them, according to the instructions of Archbishop Lavigerie. By 1890, in spite of the 1886 persecution, the Catholic community even then numbered some 1,200 baptised and 10,000 catechumens.

In Buganda, Father Lourdel was called 'Mapeera', the local pronunciation of the French 'mon Père'. According to the testimony of his confreres, he impressed his circle of friends with his physical qualities: he was tall, muscular and had rugged good looks. He was a man of action, extremely strong and active, a leader with a rare will power and the solid faith of country people. This description from his contemporaries does not compare much with the angelic image of Father Lourdel on his most famous photograph, a portrait noticeably retouched to satisfy the religious sensitivities of French Catholics at the end of the 19th century.
THE FINAL MONTHS OF FATHER LOURDEL AT LUBAGA: FEBRUARY - MAY 1890 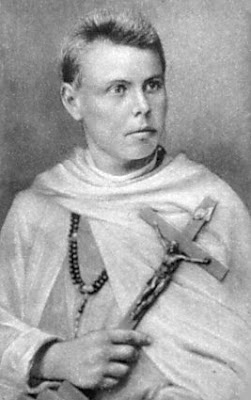 At that time, Father Lourdel became an influential person among the Baganda: he was at one and the same time superior of Rubaga Mission, a gifted leader for the Catholics and the personal advisor of Kabaka (King) Mwanga (ca.1866-1903). Moreover, he was a friend of Gabriel, the commander of the Royal Army, which was composed, in addition to ordinary troops, of a special guard of 3,370 soldiers armed with old rifles and equipped with a considerable fleet of boats.
From February to May 1890, he was prey to the worry of preserving the independence of Buganda and the throne of Mwanga, who had become his catechumen. In 1888, the Muslims known as the 'baadi', because of the Mahdi of the Sudan exiled Mwanga and founded a Muslim kingdom, to the dismay of the Catholics. The following year, these Catholics, with their allies, restored Mwanga to the throne, after defeating the 'baadi'. However, the victors were unable to defeat their adversaries for good: the Anglicans, distrusting power in Catholic hands, refused to take part in the fighting.
Wary of the threat of a 'baadi' revenge, Father Lourdel tried to unite Catholics, traditionalists and Protestants to form a coalition based on power-sharing. Above all, he feared the intervention of an Englishman named Jackson (1860-1938), an emissary of the 'Imperial East-Africa Company' and a German named Peters, (1856-1918), founder of the 'Deutsche Kolonialgesellschaft'. These two, representing colonial powers, intended to take Buganda, exploiting its political and religious instability. Each in turn proposed military aid to Mwanga to combat the 'baadi'. Their assistance naturally had a price tag: Jackson demanded a protectorate with a trading monopoly for his company and Peters demanded the neutrality of Buganda with freedom to trade.
Given the content of the two proposals, Father Lourdel advised Mwanga to sign a treaty preferably with Peters in the hope of preserving the independence of his kingdom, on the way to becoming a Catholic kingdom. This treaty, drafted in French and Kiswahili, was signed on the 1st March 1890 to the great displeasure of the Anglicans. They feared a power takeover by the Catholics and appealed for help to Jackson, who went to the royal capital at Mengo on the 14th April 1890, accompanied by three hundred well-armed Nubians.
Hardly had he arrived than Jackson asked Mwanga to arrest Peters. However, his request came too late: the German had already left the capital having thanked Father Lourdel for his services. Subsequently, Jackson had an interview with Father Lourdel, who advised him to wait with the protectorate proposal. He explained to him that 'neither the Baganda nor the King are ready for that yet.' However, Jackson, an English Protestant, refused to take account of the advice of this French Catholic priest and on the 21st April 1890, requested the protectorate.
What Father Lourdel recommended occurred. Kabaka Mwanga refused Jackson's request and threatened to leave his kingdom in company with his supporters. Finally, to get out of the impasse, the Kabaka proposed to send two ambassadors to Zanzibar, an Anglican and a Catholic, to submit to the German and British consuls the issue of knowing whether Buganda would remain free or become a British Protectorate. Jackson agreed to the proposal and he then made ready to leave for Zanzibar, accompanied by two Baganda ambassadors.
It was then that Father Lourdel fell seriously ill. Surrounded by his confreres, Fathers Brard and Denoit, he died on the 12th May 1890 at Rubaga. According to a contemporary diagnosis, he died of hepatitis. Upon learning the news, his Vicar Apostolic wrote to Maison Carrée, 'He is the eighth confrere to leave us in eight months.'
Père LombardOn his deathbed, Father Lourdel designated Father Brard (1858-1918) as his successor. 'This appointment would be confirmed at the beginning of July by Bishop Hirth (1854-1931), successor to Archbishop Livinhac as Vicar Apostolic of the Victoria-Nyanza Vicariate. In the meantime, the role of superior of Rubaga was filled by Father Lombard (1857-1893), on account of his age; he had been travelling at the time of his confrere's death.
Posted by williamkituuka.com at 7:18 AM