AT SOME POINT IN TIME, UGANDANS WILL KNOW THE TRUTH OF WHAT HAS GONE ON IN MUSEVENI'S RULE

Time will tell. May be at the time when the likes of King Mwanga killed people no one would raise a finger, but to day what went on during that time can be readily got from the Internet. We read in the papers that shs 20bn had been reserved to will over Buganda's heart. Secondly, the NRM claims that it has 9 million voters, yet the number that voted was less than 9 million and many people did not vote after failing to trace their names on the voter register. So, one can say that Museveni won all parts of Buganda, but in the minds of many right thinking people this is hopeless. At least our children and grand children will get the truth of what tricks the NRM uses to get the votes they allege to have got in the elections. It still will remain on record that though the power belongs to the people of Uganda, Museveni using his dictatorial style ambushed this power long ago. He has used the numbers in Parliament to endorse the will of his heart, he uses outright refusal to endorse the wish of the people otherwise by now Kiggundu of the electoral commission and many of his commissioners would be part of the history of Uganda's Electoral Commission as administrators. The reason Museveni refused to remove the Commission is part of the 'magic' behind his success. But as long as the Almighty God is there, Museveni will at some point go, and may be Ugandans will get a leader who will respect their right and not be fed on this talk that we fought, etc. Do you fight to end up leading people to misery? It is unfortunate.
William Kituuka.
WHY BUGANDA VOTED MUSEVENI 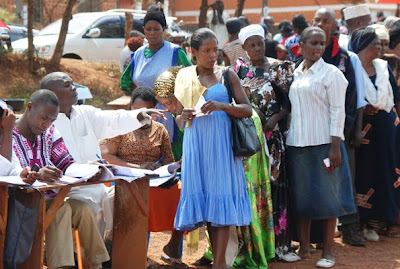 Residents of Kawempe, a Kampala City suburb line up to vote during the presidential elections. PHOTO BY ISMAIL KEZAALA.
By Yasiin Mugerwa
Posted Saturday, March 5 2011 at 00:00

Kampala
Even after clipping Kabaka Ronald Mutebi’s wings, President Museveni still managed to win in all the 24 districts of Buganda Kingdom in an election State House described as a “referendum” that officially turned the tables on Mengo administration.
With at least 62.7 per cent of the valid votes cast, central region, including Kampala City where Mr Museveni has never won before in an election surprisingly tilted in the favour of the incumbent. The main opposition challenger, Dr Kizza Besigye of the Inter-Party Cooperation (IPC) only managed 31.7 per cent —a result that substantially made the Buganda factor immaterial in determining the winner.
While the Leader of Opposition Prof. Ogenga Latigo insists that President Museveni “bought success in this election”, analysts say the NRM’s “impressive” performance in Buganda will help President Museveni turn the tide in a love-and-hate relationship with the Buganda Kingdom—making him a “frontrunner” and the people of Mengo the “vagabonds” in the periods to come.
“This was not a genuine win. President Museveni used public money to bribe voters in this election,” Kawempe South MP Richard Ssebuliba Mutumba said. “What has changed to justify Museveni’s win when poverty is increasing, corruption is at its best and unemployment is seen everywhere in Buganda? This means there is something wrong with his victory.”
But latest figures show that President Museveni, who has ruled Uganda for 25 years, his political clout in Buganda Kingdom, a cosmopolitan region with the biggest number of voters estimated at three million, only grew by a 0.9 per cent, a negligible performance in a region that appears to have failed to play a kingmaker’s role as expected.
Over the years, analysts say Mr Museveni has succeeded in isolating Buganda Kingdom, with an in-your-face frankness and nonstop aggressiveness that appears to have angered the Buganda but that did not stop him from winning. But why even with such aggressiveness, did Mr Museveni still managed to have his way? “Museveni didn’t win in Buganda,” Mr Medard Ssegona, the MP-elect Busiro East and a former deputy information minister in Kabaka’s government said. “He manipulated his way. He set his exams and excelled in it. Museveni answered his questions to perfection and everybody knows this including the international community.”
“Paper success cannot be transformed into reality and the people of Buganda didn’t vote for him. The results you see were as a result of his rigging machinery and bribery. He used public resources to buy votes in Buganda and other areas. He donated boda-bodas, cars and bicycles all in the name of bribing voters under the guise of presidential donations.
Central Uganda, home to the Kingdom of Buganda and the capital city, Kampala, was traditionally the home turf of the Democratic Party. But since 2001, the Forum for Democratic Change (FDC) has also made serious inroads. While this time the NRM dominated the region, Kampala has over the years overwhelmingly voted for the opposition.

Referendum
In 2006, the Electoral Commission (EC) Chairman, Dr Badru Kiggundu, said results from 1,050 of the 1,083 polling stations in Kampala District gave Dr Besigye 238,535 votes representing 56.89 per cent, while Mr Museveni bagged 164,789 votes, representing 39.31 in the city. But in last week’s elections, President Museveni did not only managed to take Kampala Central and East seats from the opposition, he also nailed Dr Besigye to a draw-- each getting 46 per cent.
“This election was a referendum in which the people of Buganda voted in favour of the government in power,” President Museveni’s Private Secretary on Political Affairs at State House, Mr David Mafabi said. “The people of Buganda love their Kabaka but they have moved on and voted a President who restored their Kabaka.
“There was no bribery. By concentrating on bread and butter issues in his campaign, President Museveni genuinely won the hearts of the Baganda. President Museveni is not like the opposition candidates who were opportunistically promising Buganda a federal status. The people of Buganda have realised that President Museveni is not an enemy to Buganda and that’s why they voted for him in big numbers.”

Buganda grievances
By forcing through the Land (Amendments) Bill 2007, stopping the Kabaka from visiting Bugerere County in Kayunga District, which is one of the areas of Buganda Kingdom, that resulted into the September 2009 riots in which 27 people died, the closure of the kingdom’s radio, CBS FM for almost one year and later the passing of the Institution of Traditional or Cultural Leaders Bill, 2010, President Museveni provoked acrimony among the Banganda.
However, by refusing to appear on CBS FM during his campaigns, analysts say President Museveni never wanted to swallow his pride, a gamble that worked for him in the process. But Kampala mayoral aspirant and MP Kampala Central Erias Lukwago, said: “It would have been shameful for Museveni to appear on a radio he illegally closed. The people of Buganda were too annoyed with Museveni to vote for him. Unfortunately, Museveni knew he was going to win this election even in hostile areas because of the money.”
Tabled on December 17, 2009, the Cultural Leaders Bill passed in the middle of the campaigns and now pending Museveni’s endorsement before it becomes a law, seeks among others to ban traditional and cultural leaders from engaging in partisan politics. The Bill, however, described as unconstitutional and targeting the Kabaka of Buganda, kicked off a storm with protests most vocal from Buganda Kingdom.
Faced with unresolved Buganda question—the return of Ebyaffe among others, the quest for a federal status and the return of the 9,000 square miles of land-- including the 18 counties, political pundits had projected a difficult election for Mr Museveni especially in Buganda. But like the case in other perennial difficult regions for Museveni, such as in northern Uganda-- the NRM leader easily swept Buganda in an election, the opposition leaders have described as corrupt, fraudulent and sham.

Money factor
By asking voters to take NRM money and vote against the regime, analysts believe the opposition shot itself in the foot as many voters in rural areas opted for NRM for fear that the government might know how they voted even with a secret ballot.
But analysts such as Dr Sallie Ssimba of Makerere University Faculty of Social Sciences said that district politics helped Mr Museveni cruise to the victory in some areas including Buganda. Dr Simba said in all the new districts in Buganda and in other areas, the NRM leader performed well but was guarded to describe Mr Museveni’s 68.38 per cent win as increased popularity.
Dr Tanga Odoi, a historian from Makerere University said: “Buganda is a complicated constituency with diverse interests as the nature of the population. The people in rural areas respect the Kabaka and vote Museveni because anti-government messengers live in towns.
With money powered in areas of Buganda, there was no way the opposition would win. The people of Buganda voted to maintain the status-quo. They did not want to go back to uncertainty and the opposition did not have the machinery to match Mr Museveni.”
However, the government chief whip, Daudi Migereko who was on President Museveni’s campaign taskforce said: “NRM didn’t bribe voters, we worked for our victory. We have improved service delivery and we had a clear and consistent message to the voters based on the NRM manifesto. This is why we won by a landslide in all regions.”
Posted by williamkituuka.com at 10:35 PM