WHAT SECURITY IS GIVEN TO BALLOTS WHICH CAN MAKE A RECOUNT WORTH? 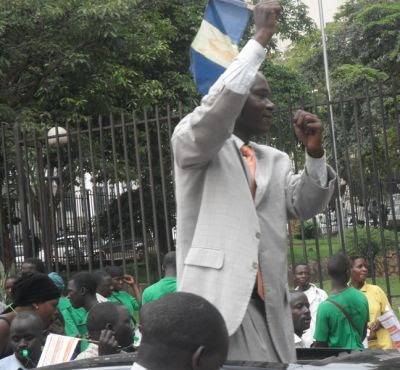 Moses Kasibante is losing the seat after a re-count? 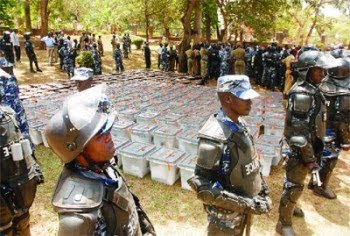 safe guarding ballots while intimidating the people, all is a farce.
The most unfortunate development to day is the unholy marriage between the Electoral Commission and the NRM. If the NRM candidate lost the election after a lot of money was spent to bribe the voters, it looks like NRM is determined to see such a one win through the Ballot recount. The question raised is, in a situation where silly acts like ballot stuffing is done before even the voters cast their vote, who is that holy who will notstuff ballot boxes in favour of NRM. It is sad to say that some of what we see really stinks, but it is expected of a regime which is imposing itself on the people and using all machinery possible to intimidate the electorate. For instance, had it been another candidate for whom ballot boxes were stuffed in the Kampala Lord Mayor race such a one would have been dismissed, but because the NRM is the Electoral Commission sematimba prevails. It is a shame to the country, but anyway it is expected of a regime that has gone so low as the NRM.
william kituuka Kiwanuka 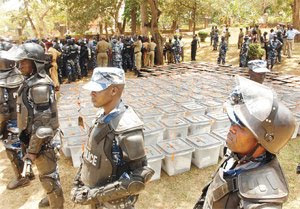 SINGH Katongole was declared winner of the Rubaga North parliamentary seat after a vote recount ordered by the Mengo Chief Magistrates’ Court on Friday.
The NRM candidate polled 24,802 votes, while Moses Kasibante (independent) got 22,850 votes.
The results were declared this morning at 2:45am by the Kampala returning officer, Molly Mutazindwa
The tallying went on up to about 2:30am. Floodlights were switched on at the court compound at 7:00pm yesterday.
In the February 18 elections, Katongole, also NRM deputy treasurer, got 18,595 votes against independent candidate Moses Kasibante’s 24,054. There were seven other candidates in the race. Kasibante is a newscaster on CBS FM radio.
The votes recounted were from 140 out of the 141 polling stations in the constituency. However, results from the polling station near KCC Rubaga division, totalling 1,093, were reported missing.
A total of 58,637 votes were cast. Spoilt votes were six, invalid ones were 830, while the valid ones were 57,507.
Katongole said he was happy the results showed a reflection of the voters choice.
However, earlier, Kasibante’s team protested when it was discovered that the seals of eight boxes had been tampered with.
The team walked away in protest after failing to stop the recount. Kasibante won the poll in the first declaration of results on February 19.
But Katongole rejected the results, citing rigging and asked the magistrates’ court for a recount.

However, Kasibante in turn asked the High Court to stop the recount, which was granted.
But Mengo Chief Magistrates’ Court ignored the directive yesterday, saying it came after the recount had started.
Electoral Commission spokesperson Willy Ochola also said it was too late to stop the exercise.
The magistrates’ court ordered the recount on February 25, but the higher court halted the process pending its decision on Kasibante’s application.
“It is necessary to maintain the status-quo. An interim order is therefore issued pending outcome of the main application,” said Isaac Muwata, a High Court registrar.
In the February 18 elections, Katongole, also NRM deputy treasurer, got 18,595 votes against independent candidate Moses Kasibante’s 24,054. There were seven other candidates in the race. Kasibante is a newscaster on CBS FM radio.
Kasibante’s lawyers and agents stormed out of the court compound at 2:30pm but Katongole stayed on. By 1:00am, the counting was still going on amid tight security.
Earlier as the High Court in Kampala was hearing Kasibante’s application, Mengo Chief Magistrate Phillip Odoki was also hearing submissions from his lawyer Erias Lukwago, and Katongole’s lawyer Kangye Mugabi.
Lukwago argued that Kasibante was served with the order on Sunday at 1:00pm, which was against standard practice. He then asked for three more days to enable his client study the order.
Lukwago accused Katongole and the Electoral Commission (EC) of conniving to frustrate Kasibante. He asked Odoki to disqualify himself from the matter, saying “money could have exchanged hands”.

However, Mugabi said Kasibante was meant to be served on Friday but his residence could not be traced.
In spite of another lawyer, Medard Ssegona, producing a copy of the order halting the process, Odoki ordered the recount to start at 2:30pm. He advised any aggrieved party to petition the High Court.
Tempers flared when Lukwago tried to block the recount. Katongole accused Lukwago of purposely delaying the recounting. Amidst the exchange, Kizito Sserumaga, an agent of Kasibante, was thrown out of the court premises by security.
Kasibante, who was earlier at the High Court, arrived at Mengo Court at about 11:00am. The situation remained tense, with a thick blanket of security.
The anti-riot Police and armoured military trucks were strategically stationed at the court to avert crowd trouble.
Ssegona said the recount violated Kasibante’s constitutional rights and breached court procedure.
“The order flagrantly violates the applicant’s right to be heard in an election matter that has an effect of nullifying his election. It was filed against the EC without the winning candidate,” Ssegona said.
But Katongole’s lawyer, Asa Mugenyi, called for dismissal of the application, saying it was erroneous as it did not include the EC as the other respondent.
Mugenyi argued that the EC was in charge of the voting material and that during the recount, Katongole was a “mere observer”.
“Serving an order against Katongole Singh would be futile,” Mugenyi argued.
He cited section 65 of the Parliamentary Elections Act which empowers a Chief Magistrate to make an order for a recount.
Posted by williamkituuka.com at 10:38 AM