God can be fair to the likes of Peter Ssematimba. You know the NRM establishment wanted to use Ssematimba in its efforts to kill Mengo. The starting point were the moves which led SEMA to leave Mengo and start his own 'rival' station. Unfortunately, that deal flopped because CBS is not an individual driven station, it is culturally backed.
Strategy number two is when SEMA came in to contest for the Lubaga Seat which he fluked because the opposition was disorganized and he took the seat.
Because of being over ambitious and not backed by the rightly recognized papers, he messed and went for the Lord Mayoral Seat. It beats understanding for SEMA to have assumed that he could beat the lawyer who is more qualified, though of course the NRM used all the cash they could, but the good Lord decided to ashame him. While many people were injured because the NRM activists wanted him in office, he bragged, he did not even seem to show sympathy to the injured, no is it known that he was ever summoned by the Police to answer for th sins of his wish to become Mayor which may have been committed by those people who believe that he is the right devil for the office. It is shame upon SSematimba who bragged around knowing in his ignorance that the 'man who owns the money' was behind him. Ssematimba went around the Radio stations telling the listeners how he had managed to get so many children have bursaries during his time, however, asked where the money to sponsor the children came from, he kept it as his secret! He was sure of winning whether properly voted or not, but that the Almighty God is there, he was put to the shame he deserves as he pretends to be a pastor who does none Godly things!
"GOD LORD THANK YOU FOR PUTTING SSEMATIMBA WHERE HE BELONGS. HELP US LOWER THOSE WHO LIKE SSEMATIMBA THINK THAT THE WORLD BEGINS AND ENDS WITH THEM. I PRAY IN YOUR NAME.
WILLIAM KITUUKA KIWANUKA 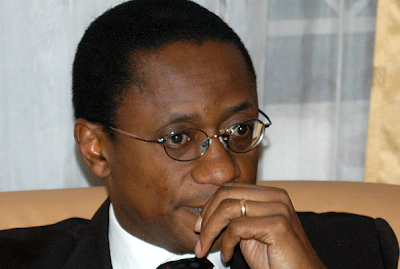 I am out of politics, says Sematimba
I AM DONE: Mr Sematimba at the press conference in Kampala yesterday. PHOTO BY JOSEPH KIGGUNDU
By Mercy Nalugo

Posted Friday, March 18 2011 at 00:00
Former NRM flag bearer in the just-concluded mayoral elections, Mr Peter Sematimba, who lost to his main challenger, Mr Erias Lukwago, has conceded defeat and announced he is quitting politics.
Mr Sematimba, who pledged to work with Mr Lukwago, said he is making a return to the private sector, but added that he “would serve in any other capacity in case he is given the opportunity”.
Addressing his first news conference at his home in Lubaga, a Kampala suburb, since last Monday’s mayoral election, Mr Sematimba congratulated Mr Lukwago upon his resounding win.
“I acknowledge that a new mayor has been chosen and declared,” said the outgoing Rubaga Division chairman. “I acknowledge that fact. Since I am more focused on the issues of Kampala, I congratulate the new mayor upon his victory.”
He added: “If Lukwago thinks there is any way I can contribute to the wellbeing of the people of Kampala, he should not hesitate to call on me.”
Mr Sematimba, who appeared calm and composed, also declined to respond to a host of questions from journalists who sought his opinion on why he lost and whether he was contented with the final results.
“I won’t go into that. I don’t think this is the right time for me to answer that. We did not go into the campaigns to remain there forever,” said the politician, donning a neat black suit.
Mr Lukwago was declared the winner of the mayoral seat after polling 229,325 votes (64.41 per cent of the total votes cast), representing nearly twice the votes got by his closest challenger, Sematimba, who scored 119,015 votes (33.43 per cent).
Others in the race were Michael Mabikke (4,092 votes), Edward Francis Babu (2,059 votes), Sandra Ngabo Katebalirwe (1,035) and Emmanuel Tumusiime, who got 539 votes.
Mr Mabikke has since resolved to drag the Electoral Commission to court calling for the nullification of the March 14 polls.
He argues that the Electoral Commission disregarded his earlier plea to stay the re-election until a comprehensive status report on why the first election on February 23 had been made public. He says the roll had many ghosts.
The February 23 elections were called off amidst allegations of vote rigging and ballot stuffing.

Go work
Mr Sematimba, however, advised his colleagues to get back to work other than engage in endless battles.
“Seeking legal redress is not necessary. We were looking for Kampala leadership and we got it. Let us go back and work. For me I have already started receiving my deals and I have started making money,” said the pastor, who also owns a private radio station, Super FM.
Posted by williamkituuka.com at 12:22 AM