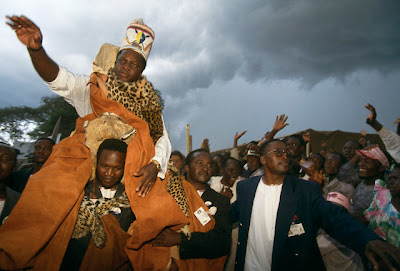 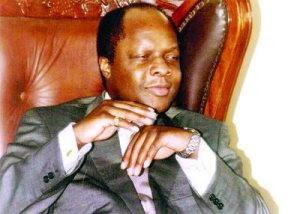 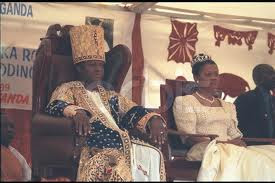 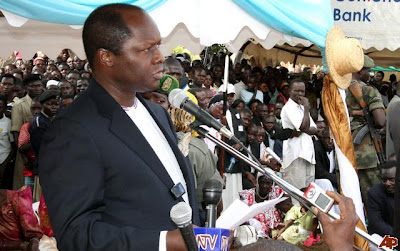 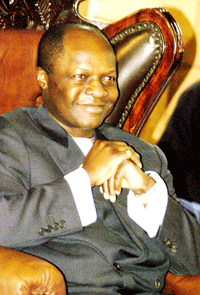 Museveni's love power will lead Uganda to instability. Much as his NRM/A waged a 5 year bush war, he did it with the conviction of our people who thought that he was trustworthy. He decided to be party to the installation of the Kabaka, but it looks that he was doing something against his will. But, may be he had no option given the contribution and sacrifices the people of Buganda made to see him in power where he has spent a cool 25 years and wants more years given the outcome of the 2011 Presidential elections. Developments which are not out of a surprise are such that Museveni sees himself not in charge when the Kabaka of Buganda is around. His Government's use of the house for the Katikiiro traditionally makes it impossible for the King to enter his official palace. Buganda has assets which todate the central Government has not returned to Buganda. The shameful hold to the rents due to Buganda is also being witnessed and to put the last blow is the mis advised move to have the Traditional leaders bill passed as law.
The way forward is for the Kabaka of Buganda to move to where human rights are respected. When things change for the better, the king can return as in the circumstances prevailing, the NRM Government can shamelessly imprison the Kabaka. The Government is fighting a losing battle because the Kabaka institution s here to stay.
William Kituuka Kiwanuka

MUSEVENI SIGNS TRADITIONAL LEADERS BILL
Posted by Sheila Naturinda
on Tuesday, March 8 2011 at 00:00
The Institution of Traditional Leaders and Cultural Bill 2010, which was passed by Parliament early this year, has been signed into law.
President Museveni signed the Bill which bars traditional leaders from involvement in partisan politics.
Sources within government printing and publishing corporation have told this newspaper that it is now being printed as a gazette.
The President’s press secretary, Ms Linda Nabusayi, also confirmed to this newspaper that Mr Museveni had signed it.
“I have no details but he has accented to it,” she said.
But Buganda Kingdom attorney General Apollo Makubuya said the kingdom would still challenge it in court, following a resolution by the Lukiiko to that effect.
“We are still bound by that resolution and we shall wait to see what he has signed before we petition to challenge it,” Mr Makubuya said.
The Bill also bars traditional leaders from promoting any political party or its activities, render direct support to a party or make statements against government policies and programmes.”
But Mr Makubuya said the law infringes the rights and freedoms of the cultural leaders. “It undermines cultural values hence our need to petition it in the Constitutional Court.”
THE TRADITIONAL LEADERS BILL(2010) IS ONE OF THE BAD LAWS I HAVE EVER SEEN IN MY LIFE
15 Jan 2011 8 Comments

by semuwemba
Dear readers,
The Cultural leaders Bill (2010) is not just annoying but it is likely to breed more than chaos in our country if passed by the parliament. The bill is a disastrous draconian law that has little direct connection with keeping cultural leaders on the leash other than shutting their mouths indefinitely on national causes or issues, as if they are half citizens of Uganda. Uganda Lawmakers are preparing to vote on a bill that would eventually outlaw nearly all traditional institutions in the country, a measure that could become the most sweeping ban in Uganda history.
The bill’s definitions of “partisan politics” are laughable to say the least. I was mostly concerned with the following definitions: (c)” recommending a particular person to the public with a view to promoting that person politically”; (e)” making statements against Government policies or programmes”; and (f)” making statements or comments on Bills or motions under consideration by Parliament with a view to influencing their outcome”. This is simply called interfering with the “freedom of speech,” of traditional leaders not ‘partisan politics.’ In any democracy, even people with traditional or cultural roles can’t be prevented from having an opinion — a.k.a. “freedom of speech.” They may not, however, campaign for, or endorse, specific candidates because that would be “partisan politics.”
The very term “partisan politics” refers to supporting one party over another, or one particular candidate, which Mengo or any other kingdom never openly does. Yes,Ssubi was formed by former Katikiro of Buganda after he resigned from all his duties at the kingdom.In any case, Ssubi would not have been formed if the demands by the Mengo admnistration had been met by the central government. Buganda kingdom particularly does, however, engage in what it considers to be efforts in favor of moral issues.The president may disagree with the Kabaka( Buganda kingdom), but he has to admit that opposing bad policies or leadership on moral grounds is clearly within the purview of any cultural leader, not just the Kabaka. If the truth is more important than partisan politics, I’m sure president Museveni who is the architect of this bill, will take the time to learn. If partisan politics are more important, then he is just wasting my time and yours.

Kabaka Mutebi
Part 2 of clause 7 of the bill is another annoying one as it says: ”The Government may in accordance with a court order withdraw its recognition of a traditional or cultural leader where the traditional or cultural leader:(a) acts in contravention of the Constitution or this Act; or (b) abdicates the institution of a traditional or cultural leader”. This article just confirms all the fears people have always had that president Museveni is planning to ‘abolish’ kingdoms in the country. This means that if this bill is passed and mengo goes ahead and starts opposing some other ‘funny’ bills, as it did with the land bills, then Kabaka may end up served with a notice to say good bye to his kingdom.
Clause 9(2) says:’’ Where there is more than one traditional or cultural leader in the area of a regional government the position of the titular head of the regional government shall be held by each of the traditional or cultural leaders within the area of the regional government in rotation for one year at a time.’’ This was intended to make the chiefdoms created in Buganda under Museveni very happy. It simply means that Ssabaruli or Ssabanyala can easily take over at Mengo and, by law; Baganda will just have to accept it. I will not be surprised if these chiefdoms embrace this bill with two hands because their survival solely depends on the government in power. It should not be forgotten that Uganda had only four recognised kingdoms at independence in 1962.
Concerning the conduct of cultural leaders with foreign governments, article 15 of the bill says:’’(1) A traditional or cultural leader shall not deal with foreign governments except with the approval of the minister responsible for foreign affairs; and (2) The minister responsible for foreign affairs shall develop guidelines for approval to be granted under subsection (1).’’ This means that the Kabaka has to seek permission before he hosts any foreign leader as he did sometime last year when he received a delegation from Swaziland, the US ambassador at Kireka palace, and the Libyans when Gadaffi visited Uganda.
Clause 17 says:’ The ministry responsible for culture shall once in every calendar year cause to be published in the Gazette a List of all traditional or cultural leaders in Uganda whom Government facilitates.’’ This in effect means that the government intends to create more traditional leaders as it has been doing ever since Kabaka and president Museveni fell out, and any of the cultural leaders who falls out with the government will not be listed in the annual gazette( which I suspect will be the Newvision newspaper). In other words, becoming a traditional leader is going to become more like winning a prize or trophy of some sort, as in like football or other sports. It is also one way of blackmailing traditional leaders to support whatever the government wants.
Clause 18 is meant to cut off the likes of Beti Nambooze, Medard Segona and Mpunga from the Kabaka completely. Nambooze was the chairperson of the Buganda civic Educational Committee, an organization mandated by Mengo to teach people the ills in the 2007 land bill which was later passed by the government. Namboze and the two Mengo ministers ended up being arrested and later charged in courts of law. But with this bill, it means the Kabaka is ‘’ personally liable for criminal offences committed by the traditional or cultural leader or the agents or persons in the employment or acting under the authority of the traditional or cultural leader’’. In otherwords, the government is trying to cut off Kabaka or other cultural leaders from their loyal subjects. The bill is practically dumping them in a social ‘prison’. It also means that we are likely to see the Kabaka arrested or in a dock or jail at some point if he breaks any of the contents in this bill.
The ancient Greeks maintained that “a bad law is no law.”They did not expect people with common sense to take bad laws seriously. Yet, as a nation, we are so regimented that we are willing to use guns, parliament, jails, prisons and all manner of violence to enforce bad laws on otherwise law abiding citizens, as the traditional leaders in our country. I therefore request Uganda law makers to throw this bill in the bin because it is simply a bad law. It does not belong with us at all.