Many times Museveni assumes that he is a Doctor of sorts in African politics, unfortunately, the mess in Uganda is there for all to see, he seems to be adding to it and to the conflict within the people of Uganda. Instead of solving these problems, he keeps himself busy with solving Africa's problems, and now when the successes he has made during the over 2 and a half decades in power would talk for themselves, unfortunately, because he is at the head, he has the ability to divert the would be resources to see people get better service delivery to his campaign to see him back to power! Those are the leaders we have to be proud of in Africa. Even when people tell such leaders that they are fed up, this type of leaders dont want to go. If President Museveni were to listen to any advice he would have given some other person opportunity to take Uganda to greater heights, unfortunately it has not happened and here he is busy defending other leaders whom people are fed up with.
William Kituuka 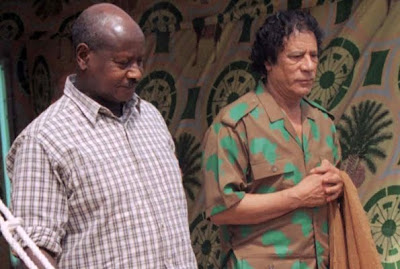 The exploding unrest in Libya fanned by demonstrators bidding to oust President Muammar Gaddafi should be left to Africans to handle, State House in Kampala said on Thursday. “President Museveni believes Africans understand African problems more than anybody else,” Presidential Spokesman Mirundi Tamale said.
He was responding to our question whether President Museveni had telephoned his in-trouble friend, Col. Gaddafi, who buoyed the 1981-6 National Resistance Army guerilla war with weapons supply, energising the rebels to capture power.
Mr Tamale said whereas Uganda appreciates Col. Gaddafi’s assistance during the NRA bush days, it does not “make Museveni a co-President of Libya to be telephoning or advising him all the time”.
The presidential aide would, however, not directly say if Mr Museveni had contacted his Libyan counterpart to commiserate with or encourage him, or advise otherwise. “Friendship, yes... Libya helped NRA, yes, but it does not mean that Uganda or President Museveni cannot pursue an independent foreign policy,” Mr Tamale said.
Citing resolution of the protracted Burundi conflict, he added: “My President believes it is only through regional African blocs or continental bodies - supplemented by efforts of the UN or international community - that true solutions can be found to African problems.”

Changing tide
Libya has been in the spotlight in the past fortnight after civilians, who appeared initially satisfied with the regime, suddenly erupted against Col. Gaddafi in power since 1969. Reports of government-sanctioned airstrikes against protesting civilians drew the ire of international actors, forcing the UN to unanimously pass a resolution condemning the bloodbath. The US and European Union responded by freezing the wealth of Gaddafi and his family members stacked in capitals of their countries.
Washington is moving a warship closer to the Libyan border after President Obama said all options, including military strikes, is on the table to tackle the crisis raging in mainly east of the country. British Prime Minister David Cameron proposed a ‘no-fly’ zone over Libya but China and Russia, both UN Security Council permanent members, oppose its enforcement.
Col. Gaddafi said he is no killer, and that al Qeada terrorist group is arming local surrogates masquerading as demonstrators, to stir violence and ruin the economy of a prosperous Libya. He, plus two sons have since gone on the media offensive to charm critics, mostly in the West, including opening the door for independent investigation of the reported killings over which the country has been stripped of the UN Human Rights Council representation in Geneva.
The African Union, which the Libyan leader is understood to have plotted to head, weighed in on February 23, condemning what it called “indiscriminate and excessive use of force and lethal weapons against peaceful protestors”.
AU’s Peace and Security Council, in a communiqué issued at its 261st meeting, resolved to send an ad hoc fact-finding mission to Libya amid reports some 1, 000 people have perished in the unrest, majority reportedly from gunshots or ripped apart by explosions. AU is calling on Gaddafi’s government to guarantee the safety of citizens.
The continental body said it “underscores that the aspirations of the people of Libya for democracy, political reform, justice and socio-economic development are legitimate and urges that they be respected”.

Gaddafi’s denials
Col. Gaddafi has in three different addresses, two of them televised, but all targeting the West, rejected allegations government forces are killing civilians and said he is going nowhere and will die fighting in Libya. He has rallied his supporters to take on the demonstrators he belittles as “rats”
Mr Tamale told this newspaper that President Museveni has “a position” he will likely make public at regional or AU summit.
Posted by williamkituuka.com at 10:51 PM