DAVID OTTI HAS PASSED ON

David Otti, one of the most decorated persons in Ugandan football is dead.
Otti, 71, died today at Case Clinic in Kampala after reportedly collapsing in the morning.
Otti is best remembered as one of the most successful coaches in Ugandan football and led giants Express, SC Villa and KCC FC to multiple titles in a career that dates back to the 1960s when he played for Bitumastic FC and the Uganda Cranes.
Otti is also a former general secretary of the National Council of Sports and at the time of his death coached Express FC.
FORMER CRANES COACH DEAD
Wednesday, 2nd March, 2011 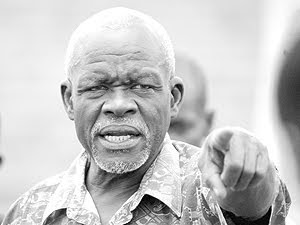 Otti has fought a long battle with diabetes

By James Bakama
THE local sports fraternity is yet again in a somber mood following the death of another leading figure.
Veteran coach David Otti, who has for long been battling diabetes, collapsed and died this afternoon.
Hamid Juma, a close friend of the deceased, said Otti and his wife Faith had just returned to their home in Mutundwe from shopping in the city. “He was rushed to Case clinic where he died at 1pm,” said a heartbroken Juma. He was 74.
A meeting was due to convene at his home in Mutundwe to make a burial program. He will be laid to rest in Gulu.
He served as Cranes coach at the Nations Cup finals in the seventies. He also coached all Uganda’s three giants Express, Villa and KCC and also had stints in Kenya, Somalia and Rwanda.
He also served as National Council of Sports General secretary.

6th May 2010
Kampala — EXPRESS FC coach David Otti admitted at Mulago hospital.
Otti, who is diabetic, is in ward 6C, bed 15. He was due for a theatre session yesterday to treat a leg wound. "He is in pain. But he will be fine," said a close friend Hamid Midi Juma. Otti has lately been rare on the Red Eagles' bench because of the ailment.
"We miss him. This is a time when his guidance is very crucial," Otti's assistant Matia Lule recently said. "I scratched the leg. The scratch at first didn't look serious but it got so painful," explained Otti last week. Express are currently third in the Uganda Super League led by Bunamwaya followed by URA. 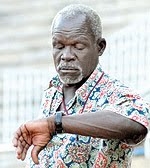 DAVID Otti was not be on the bench when his side visited Boroboro but the coach was optimistic the Red Eagles would overcome the Lira-based side. Otti, admitted at Mulago, said from his hospital bed that he was still in charge of the team and that he will resume his duties as head coach soon.
The veteran coach underwent a second operation and was found with his left leg covered though there were reports that the foot had been amputated.
State sports minister Charles Bakkabulindi paid a visit to Otti, who also doubles as the national soccer team psychologist. The minister handed the coach an unspecified package in an envelope.
The minister also visited SC Villa patron Henry Balamaze Lwanga at the hospital and called on soccer fans not to abandon such historicals at their time of need.
Express visited Boroboro in search of their 17th Uganda Super League win that should push them level with table leaders Bunamwaya on 59 points if they win.

DAVID OTTI FACTFILE
1940: David Otti was born at his family home in Gulu District
1960-65: He played for Bitmastic Construction Football Club until it was banned. During this time, Otti also played for Uganda Cranes in the Gothage Cup
1966-73: Cut his niche in Coffee’s midfield winning the league title in 1990 under Jimmy Ssemugabi
1968: Was selected for the Uganda Cranes at the Africa Cup of Nations
1973: Upon the expansion of Cecafa, Otti was appointed national team coach. Uganda hosted and won the event under him
1974: Otti became team manager
1975: Won the Cecafa title in Zambia
1976: Led Uganda at the Nations Cup in Ethiopia. The team performed poorly and he was relieved of his duties.
1978: Won the league with Simba
1979: The war forced Otti into exile
1981-83: Coach of Kenyan side Gor Mahia
1983: Returned to Uganda to become general secretary of the National Council of Sports (NCS). In the meantime, he was taken on as coach of SC Villa on a part time basis
1984: Took on the Villa job fulltime. He resigned in April, 1985 after the club failed at Ceacfa.
1987-1990: Was coach of Mogadishu Municipal Council. Left Somalia when war to oust Said Barre (RIP) broke out
1990-94: Joined Express. Won Uganda Cup in 1991 and ’92. Delivered the league title in 1993 and completed a Cup hat trick in ‘94.
1995: Villa took him back for one month before he went to Rwanda’s APR where he tutored until 1996.
1997: Otti rejoined Villa but narrowly lost the league title to KCC. Paul Hasule (RIP) took over
1999-2000: Went to Military Police upon promotion and lost to Villa in the Uganda Cup final
2001-02: Was appointed coach of KCC for two years
2006/7: Worked with City Lads Super League
2008: When City Lads was relegated, Otti moved to Mbale-based CRO
2009: Worked with Express till his death
Compiled by Ismail D. Kigongo
Posted by williamkituuka.com at 6:38 AM