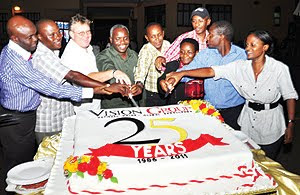 VISION Group CEO Robert Kabushenga (4th left) and members of the group’s executive committee cut a cake to mark the company’s 25th anniversary at the New Vision offices in Kampala on Friday.18 MARCH 2011

William Pike
It is most unfair for the Board of Vision Group to fail to express their gratitude to the only and only William Pike who helped to give the company direction. Many of us saw the company come up from nothing, and the managers who took over from him had no bigger job that the direction he gave the company which led it to being so profitable by the time he left office. Many of our people distort facts, the fact is that the New Vision is what it is today because of William Pike.
Thank you.
William Kituuka Kiwanuka

By Raymond Baguma
VISION Group, Uganda’s biggest multi-media company, is marking 25 years of operations that have seen it become one of the most influential media houses in the region and continent.
According to Vision Group’s board chairman David Sebabi, the company is looking forward to expanding and becoming a media giant on the African continent.
“Many of our units are leading media channels in their areas of operation, but we do not plan to rest on the achievements that have made us Uganda’s biggest multi-media group,” Sebabi said.
“The evolutions in technology are not slowing down and so, we will continue developing innovative media solutions that will keep our customers happy and meet our shareholders’ expectations,” he added.
The group’s head of marketing, Susan Nsibirwa, said the company would on Saturday celebrate 25 years of informing, educating and entertaining its audiences.
The company’s chief executive officer, Robert Kabushenga, said: “I am proud to celebrate this landmark achievement as it represents the efforts of a lot of hard work and resilience by everyone who has been part of our history.
“This tremendous growth can be credited to innovation and excellence on our part, and outstanding customer support through the years.”
Barbara Kaija, the editor-in-chief, said the company has made achievements because of great teamwork, working systems, visionary stewardship of capable managers as well as recruitment, training and retention of competent staff.
“No one can claim to single-handedly be responsible for the success of the company. We do everything in teams, brainstorming, tearing things apart and sharing ideas to find solutions,” said Kaija.
Over the years, the company has grown from a single publication to become Uganda’s biggest multimedia group.
Today, Vision Group is listed on Uganda’s Stock Exchange and boasts of subsidiaries that include five newspapers, five radio stations, two television stations, four magazines, a commercial printing division, an SMS portal and several websites.

By Vision Reporter
THE Chief Executive Officer and Managing Director of the New Vision Printing and Publishing Company, Mr. William Pike, has advised the Board of Directors that he does not intend to renew his contract as he is exploring other business opportunities.
He has agreed with the Board to stay on for a three-month handover period, a statement issued last evening said.
The Board has appointed Mr Robert Kabushenga as Deputy Chief Executive Officer and to act as Chief Executive Officer after Pike’s departure. He will understudy Pike until he departs in January 2007.
The Board selected Kabushenga because of his long experience in the media industry.
He has been a key player in the dramatic growth of the New Vision in the eight years that he spent with the company culminating in the post of Company Secretary.
Pike will continue to act as a consultant to the company as and when necessary. “The Board is grateful to all Mr Pike has done to build the company over the last 20 years,” the statement, signed by board chairman, Brig Noble Mayombo, said.
“The Board believes that this amicable transition provides an opportunity to strengthen the present high-quality management team at the New Vision and to sustain the company’s trajectory for continued revenue growth in the future.
Mayombo said, “we wish William Pike the best of luck in his new business ventures. He will be a hard act to follow but the Board believes that the combination of Robert Kabushenga and the strong team of managers already at The New Vision will provide a solid platform for future growth.”.
William Pike commented, “I am of course very sad to be leaving the New Vision but 20 years is a very long time to be running any media company. I thank the government as well as the Board, management and staff of the New Vision for having given me the privilege of working with them for so long. New Vision is a well capitalised company.
“I believe that the present management team and staff are easily capable of maintaining the company’s continued growth and sustaining the New Vision newspaper as Uganda’s leading daily.”
Posted by williamkituuka.com at 5:54 AM