UGANDA NEEDS TO USE BIOFUELS 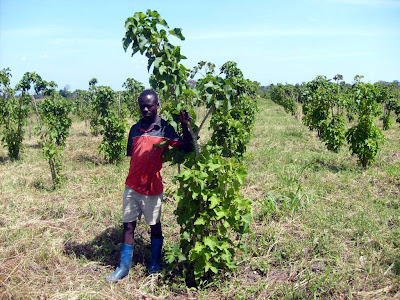 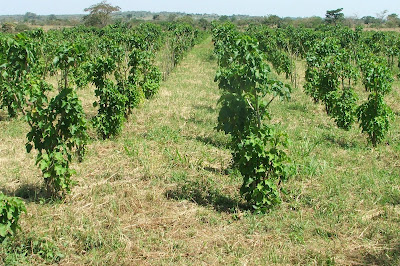 Jatropha plantation in Kimina, Masini, in Uganda
KIMINA, Uganda — The motorbike trip to the remote village of Kimina in Masindi district is distressing; the road is narrow, potholed and dusty. After an hour of a draining ride, we “wake” up to the shock of a large plantation of ebiti (unknown trees), as they are commonly known in this part of western Uganda.
The “trees” are of jatropha, a plant whose non-edible seeds can be harvested to make biodiesel. From a distance, everything looks green. It is a beautiful plantation. The owner, Joseph Kasigwa, a father of four, is proud of it too. It was abject poverty and lack of school fees for his children that pushed him into growing the crop. He now foresees big earnings once harvests start.
Despite the flourishing jatropha, however, Kasigwa will have to spend much of his income on buying food for his family. He has foregone food production for the biodiesel crop. And he is not alone; there are thousands of farmers in Masindi and neighbuoring districts like Hoima and Lira, who have either abandoned or reduced on food crop production in favour of jatropha.
In the past, the crop was used to demarcate people’s plots especially among people in Buganda (central Uganda), with no commercial value. But the global quest for clean energy has changed this. A number of countries across the world now grow the crop to produce power to lessen dependence on fossil fuels. It is widely hoped that the use of biofuel will solve several problems including reduction of greenhouse gas emission, provide a renewable and therefore sustainable energy source and increase income for the rural poor, mostly in developing countries.
According to Andrew Ndawula, the commissioner for renewable energy in the ministry of energy and mineral development, diesel from jatropha seeds is good for powering vehicles. It does not produce toxic gasses when used.
When a plan for large scale production of agrofuels was first unveiled in 2006, hope of overcoming energy deficiencies in Uganda swayed even the most senior Government officials. Since then, there has been a steady move towards massive biodiesel production in the country, with government using incentives like tax holidays to woo foreign investors into the sector. Nexus Biodiel LTD has planted over 400 hectares of jatropha in Isimba, Masindi, which is three hours north of Kampala. There are four other companies yet to start production of biodiesel, virtually from the same crop.

Farmers in Masindi, Hoima and Lira are reportedly enthusiastic about the crop.
Nexus alone boasts of more than 2,000 registered outgrowers in the three districts, according to Edward Mugenyi, the field manager. Only 36 of these have planted over 190 acres of jatropha. Jatropha production also exists in Mukono and Luweero districts of central Uganda among other areas.
Aside from jatropha, other crops being fronted for biodiesel include castor (nsogasoga) and candlenut (Kabakanjagala) seed. African Power Initiatives LTD (API) has planted about 2,000 acres of caster oil and jatropha in Namalu, Karamoja region, officials said last year. The companies promise to start production of diesel soon this year.
Ndawula says the goal is to increase the use of modern renewable energy from the current 4 to 16 percent of the total energy consumed in Ugnada by 2017. The ministry also says biodiesel is needed to meet the increasing energy demand in the country which it predicts to reach 1,809MWh in 2025. But more importantly, government wants to reduce on fossil fuel imports. It also thinks biodiesels can boost development in rural communities.
The programme has provided the rural population with new alternative cash crops, and thus additional employment. But the move has sparked off vehement criticism. Environmentalists and food rights activists though admit that curbing fuel shortages is crucial for development, warn that the biofuel industry is laced with worse consequences especially on food security.
Geofrey Kamese, the programme officer for energy and climate change at the National Association of Professional Environmentalists (NAPE), a local NGO, says biofuel production will more likely worsen food shortages, hamper poverty alleviation efforts and eventually deter Uganda’s ability to achieve most of the Millennium Development Goals (MDGs).

Biofuels take large chunks of land
He says producing biofuel will demand a lot of land at the expense of food production. Indeed, Robert Nabubolo and Godfrey Bukomba, managers of the Nexus jatropha plantation in Masindi, revealed that an acre of land can plant only about 430 trees.
Each tree produces five kilograms of seed a year, which generate just one liter of diesel. This means only 430 liters of fuel can be produced from an acre of land each year. This is just enough for one car, yet Uganda has over 600,000 vehicles, according to statistics from the works ministry. To move just 2,000 of these vehicles, for instance, it means millions of hectares of fertile land must be put under jatropha and not food production.
Mugenyi says it is possible to intercrop jatropha with some crops like ground nuts and beans to fight hunger, but the hurdle is few farmers are ready to buy this advice. Hence, most of the plantations only have jatropha trees. Besides, Mugenyi also admits that intercropping can be done until jatropha is three years. Beyond that, the trees would have acquired branches and thus unfit for intercropping.
Many other biofuel feedstocks like soybeans, corn and sugarcane are also key sources of food for people. “It does not make sense to starve our people because a few rich ones want fuel to drive cars,” Kamese remarks. “Converting food crops into fuel means more and more people will stay hungry and eventually die.”
It is upon this background that activists warn Government to tread carefully. “Biofuels are coming to compete for the small land that was used to grow food crops. In order to produce an extra litre of diesel, we shall have to convert more land from food crops to produce biofuels as more people go hungry,” Kamese warns.

Environment threatened
In the process, therefore, a lot of rain forests have to be cut to create ample land for jatropha plantations, as the case has been in some parts of Masindi near Murchison Falls National Park. This comes with disastrous environmental impacts, especially now that the country and the world at large, already suffer from the brunt of climate change. Last year, for instance, crops failed due to prolonged droughts, leading to famine that killed over 50 people mainly in the East.
Activists also castigate the monoculture system used for growing biofuel crops for involving excessive use of fertilizers, pesticides and herbicides. “It affects soil fertility and destroys biodiversity, causing both environmental degredation and food insecurity,” NAPE said in a recent publication. NAPE, therefore, believes that biofuel production would increase greenhouse gas emissions and intensify rather than mitigate global warming.
This is in line with a 2007 study by African Biodiversity Network (ABN) which indicated that biofuel projects in Tanzania, Uganda, Zambia and Benin could lead to “environmental and humanitarian disaster on the continent.”
Experts also envisage a sharp upsurge in food prices as more farmers take on biofuels. In a press release, the UN World Food Programme (WFP) attributed the 2008 rise in food prices partly to the “competition (for land) between biofuels and food.” The urban poor, who make up 10% of Ugandan’s urban population, will be hit hardest by the high food prices and will have to stay empty stomach for more days, experts say.
WFP country director, Stanlake Samkange, said in an exclusive interview that although jatropha was another cash crop, there was need to balance cash crops with food production. “Biofuels is not a bad move per se. But we want to be assured that food security will be guaranteed,” Samkange noted.
Aside, Kamese thinks that Uganda’s potential to benefit from the biofuels is very limited. “Our fear is that rich countries are the ones driving the biofuel industry by promising to buy most of the produce. We shall producing fuel for foreign markets as our people bear the burden of feeding their families,” he said.

The global perspective
Since 1930, countries have proposed different approaches to the soaring petroleum fuel prices and shortages; but biodiesels have picked up so rapidly that they seem to dominate the global debate on renewable energy today.
Biofuel production based on agricultural commodities increased globally more than threefold from 2000 to 2007. Statistics show that in 2005, for instance, a total of 994 million gallons or 3,762 million liters of biodiesel were produced across the world. Germany alone produced 1,921 million liters that year mainly from rape seed. Currently Brazil is said to be the leading producer of biofuels, mostly from ethanol and crops like soybeans and jatropha. In the US, biodiesel is produced mainly from corn. Other countries include Austria, France, UK, and Italy among others.
But fears of biofuels exacerbating hunger have reportedly forced China to be cautious when it comes to this new source of energy. With 20% of the world’s population to feed, diverting foodcrops to fuel production has reportedly been a deeply controversial issue in China. In 2007, for instance, China’s State Council halted the use of grain crops for ethanol production.
As biofuels promoters promise a source of environment-friendly energy that would also be a boon to the world’s farmers, skeptics argue that biofuel production will threaten food supplies for the poor and fail to achieve the environmental benefits claimed.
In an apparent concern over the negative repercussions biofuels had to food security, the UN Food and Agricultural Organisation (FAO) in 2008 asked nations to rethink the move towards widespread biodiesel production.
FAO also came up with a number of guidelines necessary to ensure environmentally, economically and socially sustainable biofuel production. It said national policies must protect the poor and food-insecure; ensure agricultural, rural development, and environmental sustainability. It also called for international system that are supportive of sustainable biofuel development.

Way forward
Besides the caution from WFP representative, who speaks from a hindsight having spent billions of dollars providing food relief to Ugandans hunger-stricken areas like Karamoja, there are specific challenges that need to be addressed in Uganda.
Top on the agenda, Kamese says, is the quick enactment of a national policy governing the biofuel industry. “If a person has 10 acres of land, how much of it must he put to growing jatropha or other fuel crops? A carefully scrutinised policy should guide local communities on such issues,” he says.
The policy, he adds, is also needed to protect people with insecure land tenure systems from being deprived of the opportunity of growing food crops. Plus, there is need to control prices such that even those engaged in biofuel production can afford to buy food.
Samakange says it is important that government looks at the overall balancing of food security with biofuels by encouraging farmers not to abandon food crops completely.
Other environmentalists say it would be prudent to explore several renewable energy sources for curbing the energy crisis other than emphasising biofuels. One route would be by promoting the use of solar and wind energy. Kamese also believes that small holder energy projects would be a better option for local communities than large scale biofuel plantations.
But in order to benefit the poor, and to make viable economic and environmental contributions, experts believe that biofuel technology needs further improvement, and investments and policies facilitating better agricultural innovation and trade be considered. Serious caution is sounded against Uganda turning food crops like maize into fuel.