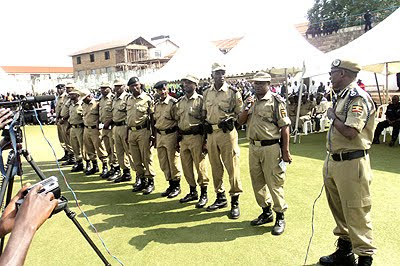 Kayihura (right) with the district commanders during a party for the SPCs
Sunday, 27th March, 2011
By Steven Candia
SPECIAL Police constables (SPCs) whose contracts expired mid this month will be turned into a reserve Police force, the Inspector General of Police Maj. Kale Kayihura, has said.
Addressing over 1,500 constables during a party at Lugogo hockey grounds on saturday, Kayihura hailed them for their distinguished service in ensuring peace during the elections. He said the Police Act provides for a reserve force.
Kayihura said though the contracts of the constables expired, they would remain non-uniformed Police officers.
He assured the constables who have not been paid that they would receive their salaries today.
“On Monday, I will send a team from the Police headquarters to pay you. Any person who did police work anywhere in the country will be paid,” Kayihura said.
About 18,000 constables were recruited countrywide on a one-month contract to help the Police during the elections due to shortage of manpower in the Police.
They were to be paid sh11,000 per day translating into sh330,000 at the end of the month.
At the function, Kayihura also put to task 13 divisional Police commanders in Kampala to explain whether they had explained to the constables at the time of recruitment that their contracts were meant to be for one month.
He later apologised to the constables after it emerged that there were anomalies in three out of the 13 divisions due to lack of effective communication.
The Police chief promised to visit the divisional Police stations of Kira Road, Kiira division and Mukono this week to resolve the issues.
“I want to thank you for the good work you did. We achieved the mission that we were given by president Yoweri Museveni and the people of Uganda,” he said.
“As the overall commander, I was worried because of threats from terrorists, plans by politicians to foment chaos, ensuring that there is no election malpractice and the need to enforce electoral laws,” Kayihura said.
He said if there are vacancies in the force, priority will be given to the SPCs during the recruitment as long as they meet the requirements. He said much as the Police would desire to retain the services of the SPCs the force was constrained by the size of its resource envelope.
Posted by williamkituuka.com at 2:23 AM