TIME TO GET ACCEPTABLE STANDARDS FOR LEADERS, NO SHORT CUTS

I think Africa's problems remains those leaders who don't want to leave power and in the process of over staying they end up doing mistakes which induce their wish to stay for life. Time is ripe for the ruled to set conditions. It disturbs how overstaying in power ends so expensive. The recent polls tell it all. We must all accept that a leader however good he/she may be MUST have a fixed term limit and this should be observed.
William Kituuka Kiwanuka 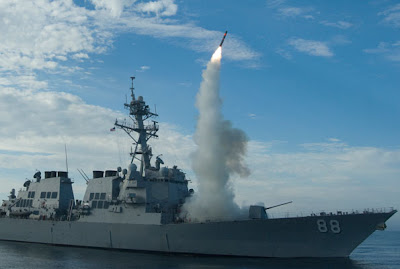 ATTACKING: Guided-missile destroyer USS Preble (DDG 88) launches a tomahawk missile. It is one of those deployed by the international coalition to check Gaddafi’s air force. PHOTO BY AGENCIES
By Emmanuel Mulondo

Posted Monday, March 21 2011 at 00:00
The United Nations Security Council has rejected requests by the African Union (AU) High Level Ad-hoc Committee on Libya (AHCL) to fly to Tripoli to mediate between President Muammar Gaddafi and pro-democracy protesters fighting to end his 42-year rule.
A communiqué of the committee issued yesterday after its meeting in Mauritania said, “The committee, in conformity with resolution 1973(2011) of the United Nations Security Council, requested for the required permission for the flight carrying its members to Libya in order to fulfill their mandate. The committee was denied permission.”

No way
Uganda ministers Sam Kutesa (Foreign Affairs) and Amama Mbabazi (Security), who represented President Museveni, were part of the delegation.
Ambassador James Mugume, the foreign affairs permanent secretary, said the committee would proceed with its mission once the international coalition is done with disabling Col. Gaddafi’s air defences.
The committee was formed on March 10 during a meeting of the AU Peace and Security Council in Addis- Ababa to stop the escalation of the Libyan crisis. The request to go to Libya was made on Saturday after a meeting in Nouakchott, Mauritania.
The ad-hoc team comprises AU Commission chairperson Jean Ping, Presidents Mohamed Ould Abdel Aziz of Mauritania (host), Dennis Sessou Ngueso (Republic of Congo), Amadou Toumani Toure (Mali), Jacob Zuma (South Africa) and Mr Museveni.

Museveni’s idea
The formation of the committee was informed by President Museveni’s proposal that the Libya crisis was “an African problem” that called for an “AU solution” with the assistance of the wider international community.
However, the AU effort was nipped in the bud following the March 17 passing of a UN resolution imposing a no-fly zone on Libya to “end intolerable civilian deaths” that were being occasioned by Col. Gaddafi’s military fire power, especially aerial bombardment.
The resolution called for an immediate ceasefire, which Col. Gaddafi said he was observing but his critics said he violated. On Saturday, the French and British military, later followed by Americans, Canadians, and Danish started both aerial and naval bombardment of Libyan air-defences, citing continued killings of civilians by Gaddafi’s forces in Bengazhi, the second biggest city of about two million people.
The AU committee’s communiqué yesterday expressed “regret of not being able, as they had envisaged to travel to Libya, on March 20, to meet with the parties both of which had agreed to deal with it.”

More resolutions
The Mauritania meeting, the communiqué said, agreed to formally communicate to both parties in Libya an urgent appeal to immediately end hostilities and take comprehensive measures to end civilian deaths and also present a road map aimed at reaching comprehensive reforms that would defuse the tensions that led to the current crisis.
Also proposed is that AU foreign ministers meet with representatives of Libya’s neighbours to discuss the regional implications of the crisis and map out efforts for regional stability.
The meeting called on member states to facilitate migrant workers trapped in the Libya conflict to return home or integrate in the Libya community and that the AU Commission convenes resource mobilisation conference to cater for emerging problems.

What the AU says
It is committed to fulfill its mission in the face of worrying developments.
Will not spare any effort in facilitating a peaceful solution, duly taking into consideration the legitimate aspirations of the Libyan people
It will act in consistence with the UN resolution and seeks unreserved support of the international community.
An emergency meeting of the AU be convened in Addis Ababa with representatives of the Arab League, the OIC and the UN to map out ways of an early resolution to the conflict.
Posted by williamkituuka.com at 12:27 AM