WHAT POWER MEANS IN BANANA REPUBLICS 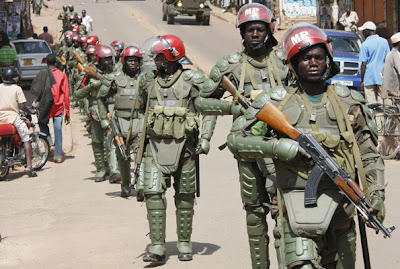 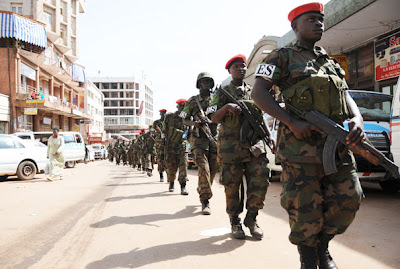 Museveni and his forces had to beef up security on learning that some fools thought that the outcome of the elections would give them opportunity to loot. The truth is that many with investments worth mention a part from the traders in general happiness in the arcades are NRM creation of billionaires, so anything that may not favour NRM hits them on the heart. So, under this cover the NRM brought out all its strength. But, God is far. Today if such things worked, Amin would still be around, but we are disillusioned for no good reason. When time comes it will have come.
William Kituuka

By GODFREY OLUKYA, Associated Press Godfrey Olukya, Associated Press – Mon Feb 21, 7:28 am ET
KAMPALA, Uganda – African Union election observers said Monday that Uganda's presidential poll suffered from several shortcomings, while two losing candidates called for Egypt-style protests.
President Yoweri Museveni, Uganda's leader for 25 years, won Friday's election with 68 percent of the vote, the election commission said Sunday. His top challenger was Kizza Besigye, who took 26 percent of the vote.
The leader of the AU observer mission, Gitobu Imanyara, said that many voters couldn't vote due to the poor management of polling centers.
"Many voters with voter cards were turned away from polling stations because names could not be found on the voter registrar," Imanyara said. "A good number of polling officials did not seem to have adequate training or confidence to perform their responsibilities and as a result procedures were not properly followed."
Imanyara also said the large deployment of security forces on voting day could have intimidated some voters, and that allegations of vote buying by Museveni's side undermined the integrity of the process.
Despite those shortcomings, Imanyara said the AU mission believed the 2011 election was better than the 2006 vote.
Besigye on Sunday said widespread bribery, ballot-stuffing and harassment rendered the poll illegitimate. He rejected the outcome.
Besigye previously threatened Egypt-style protests if the results were not in line with what he and his supporters believe the true returns are. On Sunday he pledged to work "to bring an end to the illegitimate government" but he stopped short of calling for street protests, saying he was still considering his options.
Museveni said he would jail anyone who tried to spark Egypt-style unrest.
Two of the losing presidential candidates on Monday threatened to mobilize mass protests. Samuel Lubega and former U.N. ambassador Olara Otunnu — who both fared poorly at the polls — said the elections were not fair.
"We have come to a junction where people have to make a choice. We do not accept the results. With masses we can take charge of our country. The time has come for people of Uganda to take charge of their country," Otunnu said.
European Union observers said Museveni used his power as incumbent to such an extent that it compromised the level playing field among candidates.
Museveni's team has denied allegations that the vote wasn't fair.
Posted by williamkituuka.com at 11:05 PM