COULD THE LONG DROUGHT BE A PUNISHMENT TO UGANDA FROM GOD?

In Uganda there is a lot of sinning that is going on. Many people have virtually to do some thing sinful in order to be able to make a living that is why corruption at is a life style almost across the board. When we see the prolonged drought, could it be a punishment from God for the sinning which has gone beyond proportion? How do people decide to accept bribes in order to award the wrong does call them criminals? God cannot be happy. A regime presides over the outright destruction of the mechanism which helps the creation of rain, and people cannot see that but instead reward such with votes. What is worth for such people? It is punishment delivered through nature. For a Government which has been in power for 25 years to find that the priorities have been wrong while so much money has gone to reward politicians and into administration, Ugandans should not be surprised that we can have the level of unpreparedness such that a drought comes and all just look on. Let us keep with the regime which Ugandans prefer and so we should cry least.
William Kituuka Kiwanuka 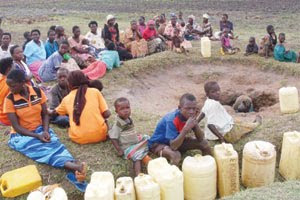 Women and children queueing up for water in Pallisa recently. Water prices are increasingly on the rise due to shortage

EVER since he was laid off from his job as a street cleaner in Mbale town, Misach Mudobe has turned to his land as the only source of livelihood.
Everyday, the 45-year-old wakes up at cockcrow, buoyed by the hope that his hard work will bear fruit. But the news making rounds in the country lately has not been music to his ears.
“We are hearing messages on radio that we are headed for a drought. They are telling us to store food and water. But the problem is the warning is coming too late. We sold out everything in the last harvest to raise school fees. What do we have to store,” says the father of five.
But the Mudobes are not the only ones worried. All over the country, life is not any better.
Musa Ecweru, the state minister for disaster preparedness, describes the situation as ‘very bad’, which needs ‘urgent attention’.
“With reports coming in, nearly all parts of the country are facing a water shortage,” says Ecweru.
According to a report by by the meteorological department, at least 36 districts have been affected by water scarcity caused by a prolonged dry spell. The department warned that the dry spell could also cause food shortage and lack of pasture.
Last year, weather experts warned that more than half of Uganda’s 32 million people were at a risk of starvation. According to the the department of meteorology, La Niña (dry spell) conditions which, started in July last year would affect the rainfall distribution in many parts of Africa, including Uganda.
But now the situation has already started to show up in Uganda. Ecweru says the situation is bad in Teso because the drought is coming at the heels of ravaging flood that hit the area in 2007.
It is now not rare to see women struggling for mudfish and families walking long distances for water at the borehole.
“Many people are helplessly staring at boreholes unable to pump a drop of water to use in their homes,” minister Ecweru says.
“If rains don’t come by mid April, we will be headed for disaster.”
The minister fears that people may be beginning to feel the pain, now that the campaigns are over. “Politicians were throwing something here and there, but now everyone will have to survive on their own,” he says.
Asked what the ministry was doing to arrest the problem, the minister said they are sending out messages to alert the public of the impending dry spell.
“We realised information was critical with all the logistical problem around,” he says of the ads that have been running on TV and radios to alert the people of the impending problem.

Disturbing revelation
Although whether experts repeatedly warned of an impending drought, there is little on ground to suggest the country is ready for the problem.
The minister said they could do little because of the elections.
“The gap created by the campaigns diverted us from the efforts, but now that the dust has settled, we hope we are better equipped to pick on from where we ended,” he says.
“For now, we are appealing to district heads to assess the problems in their areas,” he said, adding that the Government was in dilemma, considering the gravity of the problem.

Weather forecast
According James Magezi of the meteorological department, nearly three quarters of the country is likely to experience abnormal pattern with some areas like northern Uganda and Karamoja going without rain this year.
He said sunny and dry conditions characterised by higher than normal daytime temperatures would occur over the entire country during the period, and are likely to continue up to mid this year.
Although some rains are expected in March, there is likely to be insufficient amounts to support agriculture in many areas, especially in the north.
According to Magezi, the cattle corridor areas, running from Mbarara to Karamoja, are likely to be hit hardest.
“The dynamical climate models indicate that much of the northern sector (west Nile, Masindi, Lira, Soroti and Karamoja) is expected to experience near normal to below normal rainfall, while the southern sector (areas around Lake Victoria from Busia to southwestern Uganda) are expected to experience near normal to above normal rainfall,” he says.
The droughts, he adds, are also likely to lead to crop failure, causing hunger and famine in some areas. The lowering of water levels in dams and lakes is likely to lead to severe power loadshedding.
The sporadic load shedding, especially during the peak hours is resulting from decrease in the water levels at Owen Falls Dam.
According to the statement from the Minister of Information and National Guidance the problem is compounded by the rising demand for the electricity which stands at 8-10 per cent annually.

Way forward
Kabakumba Masiko says it has also affected water supply in urban areas as National Water and Sewerage Corporation is struggling to sustain supply; hampered by the intermittent power supply to their booster stations.
A jerry can of water in Kamuli is reportedly going for sh800, up from sh100. There are reports that Mbarara, Kampala and Teso are already experiencing water shortages.
But Kabakumba says the Government, in conjunction with the World Food Programme and the International Planning Committee for Food Sovereignty, is monitoring the food situation and would handle the problem if it escalates beyond the people’s ability to cope.
In the event that the situation warrants Government action, appropriate measures will be taken, Kabakumba says.
“We sent food and other materials like iron sheets to Karamoja when there was a fire outbreak recently.”
Although the Government is prepared to offer relief to areas that will be affected, ‘the primary message is to encourage preparedness and use of resources like food and water sparingly’, Kabakumba Masiko adds.

In the Old Testament God both inflicts punishment and saves. In the older prophets love and wrath are the dominant features of God's nature; sometimes wrath and love are in tension; sometimes one aspect predominates. In the exilic period, for example, the message of hope implies that wrath has ceased, at least for Israel. There is no attempt to harmonise love and wrath.

The flood and the destruction of Sodom and Gomorrah are used throughout the Bible as examples of divine wrath.(1) But temporal divine punishment is not so evident in the New Testament; the 'wrath of God' usually refers to the wrath at the day of judgement. (2) There are, however, the examples of Herod Agrippa and Ananius and Sapphira. (3) Overall the New Testament emphasizes divine punishment in the afterlife and it is this aspect which has remained in church tradition.
Posted by williamkituuka.com at 6:46 AM