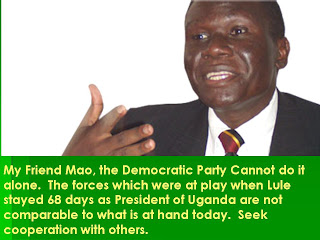 Mao, and DP, don't risk what you cannot afford as a party

We all have seen what is going on. Forces are everywhere diffusing the opposition! No body should deceive Ugandans that the number of votes got is the necessary as well as sufficient tool to see one in Uganda’s State House. That is a dream. I imagine what we saw during Binaisa’s time can easily come back to surface if a weak leader militarily emerges with enough votes to get the top job, but when those who control the military don’t need him. We have seen Dr. Besigye a Colonel being manhandled by an individual well armed! We all saw the images of what went on at Kasubi; when all tried to take cover to survive bullets. So please who ever thinks that he can get the votes needs all the cooperation of other opposition members who have the muscle to help otherwise; who ever wants Ugandans to test that type of suffering let him go it alone.

Emmanuel Mulondo
23 April 2010
Kampala — The Democratic Party has commissioned experts to study the pros and cons of joining the Inter Party Cooperation to guide the party inform its position before the end of May, president Norbert Mao has said. "We have commissioned scholars to study the matter and their report will help us finally make our decision," Mr Mao said on Tuesday. He said the team would look at whether joining the IPC is in the interest of the party and the country.

Secret team
He was, however, tight-lipped on the identity of scholars the party had commissioned. "I am not at liberty to disclose them. That may pre-empt our work but what I can say is they are not members of the Democratic Party," Mr Mao said.

The Forum for Democratic Change, the Uganda People's Congress, the Conservative Party, and JEEMA plan to field a joint presidential candidate under IPC and have, according to FDC Vice President Salama Musumba, established a protocol to follow. DP is divided on whether to join IPC.
Posted by williamkituuka.com at 7:30 AM