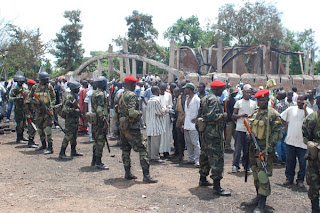 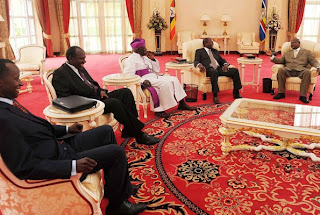 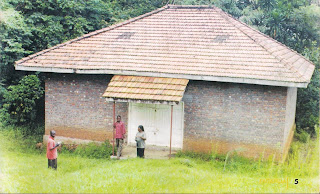 Kabaka Kintu's House which is among those that need renovation

On Friday, 16 April 2010, Katikiiro Engineer J. B. Walusimbi (Jr) got a donors to the Kasubi Tombs reconstruction fund and these were among others StanChartered Bank who came in with shs 50m contribution. The Katikiiro was asked how much he had so far raised and unfortunately, he was not in the know! Why doesn’t the Katikiiro delegate to Ambassador Sendaula? What was started by the Bank authorities may not be good news for Katikiiro, in that when the bank comes up to open an account for the collections, may be they are not trusting the way the money is being handled!

Katikiiro Walusimbi ought to know that the re – construction of the Kabaka’s official Palace was marred by scandals where it is alleged that some of the materials that were generously donated for the works were stolen by officials of Mengo! It is equally unfortunate that the reconstruction efforts have tended to generate excitement on the part of the Katikiiro to the extent that he keeps shifting goal posts of what is to be done. On Friday 16 April, he talked of works involving the whole of 64 acres of Masiro land and an estimated shs 10bn! Yet the other day when the market traders from Kasubi market called on him with shs 4m and requested for land and lease on this land, he said he was to refer the matter to Rexba the company responsible for markets. The Katikiiro ought to know that many of these people see Kabaka as a provider, and he should take their pleas seriously, and may be one of these people given that Mengo was not showing interest as they get evicted from the roadside may have been annoyed to the extent of planning the burning; in which case this is a matter that should be given the attention it deserves. Why have chunks of land when the people hardly have where to operate from for a living? It is not a big deal for the Katikiiro to move in timely and have this matter sorted, it is more important that his remaining in office to always receive those who are paying in money yet when he has assistants who can better account for this money.

To sort the accountability problems for Kasubi reconstruction, Mengo should have the money paid into Collection Accounts, so that at an appropriate time when matters regarding the committee to handle this are properly constituted by the right organs of the Kabaka Government and duly authorized, the plans can get to implementation, there is no reason why Katikiiro has to be much involved in matters where he can duly delegate to the extent that he can be asked what has been paid in and has no answer. We have learnt that UNESCO is to play a big role in the reconstruction. This is the reason why these funds have to greatly be safeguarded. Let collection accounts be in place with no withdraws and when the right committee has been assigned the duty to start the work it can proceed with everything cleanly done. Accountability can be helped if weekly reports are published in Bukedde regarding those who have paid and how much. And the best way to do this is for Katikiiro to delegate this to his assistants as he has much more to do than wait for donors to shake hands with him. The Katikiiro and whoever is delegated to should have daily returns of what has been paid and these accounts should be reconciled regularly. It is bad to have people and organizations sacrifice for a good cause and then a few people misuse the opportunity. Where money is involved, it is best to restrain everybody including the Katikiiro because he is human and can be tempted. It is also important to reach out to companies like those dealing in communication which can open an avenue where sms messages are sent and the money goes to the collection account for Masiro construction.

Meanwhile, Katikiiro’s office should endeavour to publish how the money from Government which was controversial as some people were opposed to it was spent.

The Burning of Kasubi Tombs
The Buganda royal site, the Tombs at Kasubi, have been razed to the ground in a fire that swept through the premises shortly after 9:00p.m. on Tuesday night, March 16, 2010.

Witnesses at the scene at the time of the fire said it had started without warning or build up and appears to have been the work of an arsonist.

Hundreds of distressed and wailing Baganda gathered at the burning building and tried desperately to extinguish the fire but were reduced to tears and helplessly watching the grass-thatched complex go up in flames.

When the police arrived, it too failed to put out the fire and when the crowd got rowdy, gunshots and teargas were fired in the air, further angering the crowd.

As gleaned from the TV footage, the anger of the crowd gathered at the tombs appeared to be directed at President Museveni, with many voices caught on camera angrily declaring that no matter what, one day he would perish in a fire too.

SMS text messages flying about in Kampala mentioned the fire and usually pointed the finger at Museveni.

The Katikiiro of Buganda, J.B. Walusimbi, Prince Kassim Nakibinge, and Buganda Information minister Medard S. Lubega were among the senior kingdom officials first at the scene.

The tombs, listed as one of hundreds of World Heritage Sites by the United Nations cultural agency UNESCO, were one of the most visited historic sites in Uganda.

Built just over 100 years ago, they are the traditional burial ground of Buganda’s kings, as well as the repository of some of the most valuable and irreplaceable cultural artifacts in Buganda.

Who set the royal tombs on fire?

The Daily Monitor newspaper, in its edition of Wednesday March 17, 2010, quoted eye witnesses as saying that a white pickup without number plates was at the scene.

A woman spoke of seeing a white box left at the tombs, then a loud explosion just before the historic site burst into flames.

When nearby motorcycle riders tried to block the pickup, now speeding off the scene, somebody inside or seated on the outside of the vehicle fired in the air to disperse the motorcycle riders.

“[T]he fleeing man shot in the air to scare away riders in his pursuit,” the Daily Monitor reported.

This, clearly, was an act of arson and sabotage. Whoever lit that fire knows what the Kasubi Tombs mean to Buganda. It is like setting fire to the Tomb of the Unknown Soldier at Westminster Abbey in London, historic burial site of some of England’s most revered figures.

The purpose of burning Kasubi Tombs would have been two fold.

From the point of view of one trying to cause the Museveni government to lose any remaining support in Buganda, it would have been to trigger off riots or deep and boiling anger among the Baganda.

From the point of view of a state actor, to set the tombs on fire and destroy them would achieve the goal of creating conditions of such unrest and insecurity as to warrant the proclamation of a state of emergency in Buganda.

Whatever the truth, this was an act of supreme political sabotage, not mere arson. The only act that would exceed this would be to assassinate the Kabaka of Buganda or to burn down one of his palaces.

The fact of a loud explosion preceding the break out of a fire was the hallmark of the fires that struck Budo Junior School and several others schools in and outside Kampala in 2008 and the Park Yard Market near Nakivubo Stadium in 2009. Explosives were used.

What makes the Kasubi fire even more suspicious was the reported firing in the air by the getaway car. Had the tombs been set on fire by an ordinary arsonist, he would have made it his top priority to flee the scene as quietly and inconspicuously as possible. To fire gunshots in the air could only attract attention.

More importantly, to have the audacity to fire gunshots in the air suggests the confidence of an arsonist with some measure of state protection, or membership in the official state security and military apparatus.

In its reporting and discussion of the fire on Wednesday morning, NBS television kept receiving SMS text messages from viewers mentioning their belief that it was the government.

As the fire raged on Tuesday night, the Catholic Church-run radio station, Radio Maria, kept receiving phone calls by listeners accusing the government of being behind the fire and had to discontinue the discussion for fear of being accused of inciting the public.

It was noticeable, on Wednesday morning, that most FM radio stations in Kampala avoided discussing the fire during their breakfast shows, mindful of what live phone calls from listeners would say and knowing the risk they run in having their operating licenses withdrawn. Source: http://pipeswired.com/?p=418
Posted by williamkituuka.com at 11:50 PM