Plans by Makerere University to generate own funds are in the right direction. 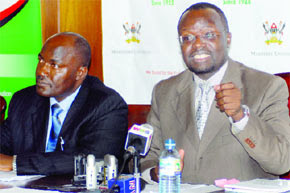 The dean of the School of Education, Dr. Fred Masagazi, listens as Baryamureeba addresses journalists at Makerere University
It is great seeing Makerere University come up with plans to make money to sustain the establishment. It is expected that the University should have experts who can see investments move and more so competitively. However, as the University ventures into income generating areas, it is appropriate to keep the teaching staff out of this, for it can be very tempting to get more time in business ventures at the expense of students.

According to the vice- chancellor, Prof. Venansius Baryamureeba, the move will see the university venturing into businesses like hotels, provision of parking services, banking facilities, petrol stations and privatisation of its sports facilities.

According to Baryamureeba, the university hopes to pull together $200m in two years, some of which will come from private partners.

he clarified that President Yoweri Museveni also pledged to enhance the venture with another $100m.

The proceeds will be used to put up modern training facilities, fund research activities and improve the university’s general service provision.

The increased revenue, Baryamureeba added, may also facilitate an improvement in the staff remuneration.

“Makerere cannot continue lamenting over inadequate funding by the Government. We have vast land around Kampala. We shall use it to raise more revenue,” Baryamureeba explained.

Since the 1990s, Makerere’s funding from the Government has consistently fallen short of the institution’s core needs. For instance, during the 2000/2001 academic year, Makerere only got sh23b from the Government, of the sh61b it had budgeted for.
Posted by williamkituuka.com at 4:13 AM