If God does not help us, Entebbe road is being made unsafe by Over speeding Police Escort vehicles 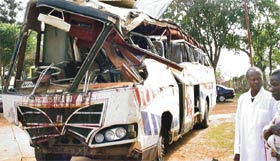 Reckless driving, overloading, speaking on mobile telephones while driving are some of the leading causes of fatal accidents
If reckless driving is partly to blame for the accidents on Uganda roads, why is it that Uganda Police drive recklessly under the cover of escorting big men and VIP's. God is still good to us, but I think it is high time those concerned looked into this reckless driving. I wonder why big men have always to be led by a reckless car under the cover of clearing the road. If you were to get cases of drivers who have got an accident on Entebbe road as a result of the recklessness of Police vehicles, the number is not very small. The question is, if the President must have such speedy cars should the Police offer same unsafe services to all VIP's name them. Are they aware that one day they may put a diplomat's life in danger given the way they drive? I think something ought to be done before we lose many more lives.

William Kituuka
20 killed in Uganda highway accident
Kampala, Oct 18 2008 (DPA) At least 20 people, many of them children, were killed Friday night when three vehicles collided near the Ugandan capital, according to radio reports and witnesses.The accident took place in Buryantente village, 45 km east of Kampala, when a school bus, a cement-carrying trailer and a small truck crashed into each other, Central Broadcasting Service radio reported.
A witness in the village told DPA by telephone that the accident first involved a bus full of school children and a pick-up truck. Shortly afterwards, a cement-laden trailer crashed into the two vehicles.
Every year, motor accidents claim hundreds of lives on Ugandan highways and are often the result of speeding, the poor mechanical condition of vehicles and overloading.

ACCORDING to Police statistics, Uganda has the highest number of people dying in road accidents in the Great Lakes region, which included Rwanda, Burundi, Congo, Tanzania, Kenya and Uganda. A report presented to Parliament early this year indicates that the deaths have been rising from 778 in 1990 to 2,034 in 2004, while road accidents rose to 19,528 in 2006 from 5,674 in 1990.

The Commissioner for Transport Regulations in the ministry of Works, Patrick Sanya, says over sh333b has been estimated as the cost of accidents in the country annually. This includes losses like the cost of the vehicles, medical bills and loss of income and property.

Boda boda
The Commissioner for Traffic and Road safety, Steven Kasiima, blamed bodaboda (motorcyclists) as the leading direct cause of accidents. Kasiima said that boda bodas contribute 70% of all major fatal accidents. And Police spokesperson Judith Nabakooba added that most of the casualty patients admitted in Mulago are victims of bodaboda accidents in the city and its suburbs.

Dr. Tito Beyeza, the head of the orthopaedic department, told the press that every month, five people die of bodaboda accidents, which implies that at least one person per week dies in the motorcycle carnage in the city.
Nabakooba said by May, about 325 people had been injured seriously as a result of bodaboda accidents. “It is either their legs that are cut or broken or injury on their spinal cords,” she said.

This justifies the current major crackdown on bodaboda riders which yielded 897 motorcycles impounded in two weeks in Kampala. 175 riders were arrested and 22 taken to court. A total of 399 spot penalty tickets were issued for offences that ranged from lack of helmets and third party to ignoring traffic lights, overloading and riding on pavements.

Why Uganda leads
The Chairman of the Parliamentary committee on physical infrastructure, Nathan Byanyima, said that the causes of road accidents are reckless driving, careless pedestrians, overloading, drivers’ error, use of mobile telephones as people drive and poor road signs.

Other causes include conditions of the vehicles, weather and political interference.

“The suspension of Sections 108 to 111 of the Traffic and Road Safety Act 1998, which deal with fines for reckless driving, has created a vacuum in the law,” he says.

State minister for Works, Eng. John Byabagambi blames the deteriorating state of roads on the rising fleet of vehicles being imported into the country.
“Many of our roads were built 20 years ago when Uganda had only 30,000 vehicles. Today, there are about 600,000.”

On the other hand, Franklin Kugonza, acting officer in charge of Inspectorate of motor vehicles, says the mechanical condition of the majority of imported used vehicles is questionable.
“Over 90% of imported used cars can hardly qualify for a certificate of fitness. These cars come with loose suspensions systems, brake dysfunction, engine problems among others.”

The Shell report
In March, Shell Uganda Limited launched a driver’s guide and a video, highlighting 247 accident black spots country wide.
“The guide will help all the road users to detect the black spots and drive carefully to reduce fatal road accidents which have claimed many lives,” Shell country director Ivan Kyayonka said during the launch at Hotel Africana Kampala.

According to the guide book Black Spots on Uganda Roads, a total of 345 people died and 1,091 were injured at different spots on major roads between 2004 and 2006. The Kampala-Jinja Road was the most dangerous claiming 185 people and injuring 550.

The Shell guide book compiled statistics of deaths and injuries which took place between 2004 and 2006 and suggested solutions at specific black spots.

Masaka-Mbarara, Kampala-Mistyana-Mubende and Jinja-Iganga each have nine spots. Busitema-Malaba is the least with three spots.
This contributes to the rising traffic jams which cause impatience that affects driver decisions, cause accidents and hold up ambulances.
Road side markets approved by urban and municipal authorities like in Lukaya, along Masaka Road, Namawojjolo, along Jinja Road, Kyabakuza (Mbarara highway), should be discouraged. Many people die as they try to sell merchandise.
Most of the vehicles imported into the country must be subjected to safety standards measures. Most of them are in dangerous mechanical condition but looking good on the surface. All imported vehicles should be inspected and given certificate of fitness which should be continuously assessed.
All stakeholders like the national road safety council, Uganda Transport Owners and Drivers Association, the works ministry, motorcyclists and the general public should be sensitised about traffic regulations.
Humps should he put in certain places especially where most school children cross the roads.
Posted by williamkituuka.com at 3:11 AM