The trials of Betty Kamya 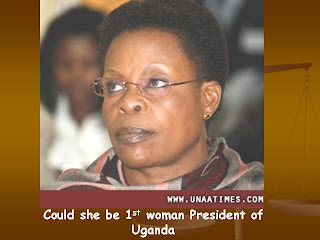 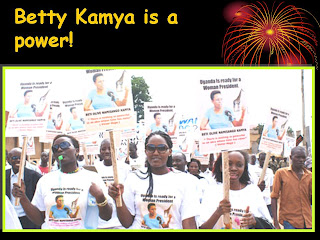 SHOWING LOVE: Some of Ms Kamya’s supporters who were blocked from getting to the FDC head offices yesterday. PHOTO BY ISAAC KASAMANI
Kayihura blocks anti-FDC protest
By Gerald Bareebe & Sarah Gauvin
Posted Wednesday, April 28 2010 at 00:00
Kampala
The Inspector General of Police, Gen. Kale Kayihura, yesterday ordered the police to block supporters of MP Beti Kamya from reaching the FDC headquarters in Kampala citing security concerns. The supporters of the Rubaga North MP were protesting her expulsion from the Forum for Democratic Change party, saying she was not given a fair hearing.
Deserter
The FDC disciplinary committee expelled Kamya two weeks ago after she thrice failed to honour its summons. In the decision announced on the eve of the party’s delegates conference, Ms Kamya was expelled after being found “guilty” of desertion and hostility towards the FDC.
Yesterday’s demonstration, political watchers said, was meant to be a show of strength by Ms Kamya against the party she helped found five years ago but disagreed with, leading to her suspension in February last year and eventual expulsion this year. In a letter to the commander of the Kampala Metropolitan police, Gen. Kayihura, said, “In the interest of peace and security, no demonstration by the group should be allowed.”
The protesters had planned to march from Nakulabye to FDC head offices at Najjanankumbi, a Kampala suburb, to deliver a petition to party president Kizza Besigye challenging Ms Kamya’s dismissal. But as news of the planned demonstration spread to Najjanankubi, the FDC youth wing led by vice chairman Francis Mwijukye and party secretary for internal affairs Francis Natukunda organised a counter force.
About 50 youth carrying clubs stood at FDC headquarters waiting to “deal with” the dozens of the pro-Kamya protesters. “We are waiting for them now and (are) ready to handle them,” Ms Alice Alaso, the FDC secretary general, said. “These are members of another party who want to disrupt our programmes. Kamya said she left FDC a long time ago but she is now organising hooligans to attack us. We have informed police and our youth are ready for them.” But some officials at Najjanankumbi had apparently alerted the police, fearing possible chaos which prompted preventive deployment to foil the demonstration.
Daily Monitor was told yesterday that Gen. Kayihura, after a telephone conversation with former Army Commander, Maj. Gen. Mugisha Muntu, ordered the Katwe Division Police Commander to block protesters from going past the Kibuye round-about.
Ms Kamya’s supporters had apparently earlier mobilised at Nakulabye to plan their march towards Najjanankumbi. “FDC members in Rubaga applied to be allowed to demonstrate against the expulsion of Hon. Beti Kamya from FDC without a fair hearing. They planned to deliver a petition to FDC but since the recipients of the petition have not responded as being ready for the same, no demonstration shall take place,” read Gen. Kayihura’s instruction signed on his behalf by one Joseph Mugisa. He instead asked the pro-Kamya group to drop their petition at Kibuye Post Office so that it can get delivered to Dr Besigye peacefully.
“We are very surprised that our bosses in FDC can refuse to meet us and even entrust the police to stop our demonstration, yet, they always lead us in demonstration against the government even when the police says we should not,” read a statement signed by Robert Lwatutte, calling himself the FDC general secretary for Rubaga constituency. “This means that FDC is really worse than NRM, if they can even instruct the police to stop our demonstration. What if they were in government! Wouldn’t they have teargassed us?”
The members said they were giving FDC leadership a two-week ultimatum to respond to their concerns, warning that failure to do so would mean returning 5,000 party cards.