It is a moral question: Where did the 3rd term come from? 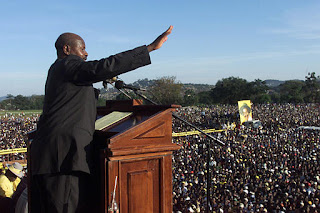 President Yoweri Museveni's 2001 Election Manifesto
Consolidating the Achievements of the Movement
The Public who are in for the 3rd term of the President may be ignorant of the facts in the manifesto.
Page 9 of the Manifesto, under President Museveni's leadership, the Movement system of Governance has helped Uganda reverse the effects of more than two decades of Political turmoil. The country has achieved Unity, Peace, Stability and Economic growth. The Movement system means pluralism - in - unity, in otherwords, pluralism without factionalism. If there is political harmony for long enough, based on all - inclusive national organisational structures, democracy will be achieved without the risk of unhealthy polarisations. This will give the country time to develop a healthy foundation for multi - partysim in the future. When President Museveni completes his second and final term as directly elected President, the Movement, under his leadership, will, for the first time in history of our country, have created a legacy of an orderly leadership succession.
Page 11
I am once again offering myself to serve the people of Uganda because of my conviction that, together with you, we still have a mission to accomplish. I am taking on the challenge of contesting for a last residential term for the following reasons:
1. Consolidating the work of building a professional army;
2. Consolidating our gains in th economy, in infrastructure reconstruction and development,
3. Consolidating our gains in democratisation and putting in place mechanisms for an orderly leadership succession; and
4. Making a contribution to the process of creating a vibrant regional market and penetrating the global market under the World Trade Organisation.


The undersigned realises that the Constitution of Uganda Article 3 (4a) says: All citizens of Uganda shall have the right and duty at all times:
a) To defend this constitution, and in particular, to resist any person or group of persons seeking to overthrow the established constitutional order; and
b) To do all in their power to restore this constitution after it has been suspended, overthrown, aborogated, or amended contrary to its provisions.
Clause 5 of the same article says: Any person or group of persons who, as require by clause 4 of this article, resists the suspension, overthrow, abrogation or amendment of this constitution commits no offense.
It is clear that those who got involved in removing Presidential term limits were so short sighted as they entrusted the future of Uganda into one man's interests that is President Museveni forgetting that this has the potential of turning the country back to turbulent times. The petition therefore seeks signatures to see that the old constitution order can be re -instated.
Given that background, it is unfortunate to see that people who have spearheaded the promotion of Good Governance in Uganda to the extent of waging a 5 year bush war which brought NRM Government to power in 1986, can turn around and decide to promote own interests suiting selfish interests using legislation; which is likely to cost the country so much in the near future.
MEMBERS of Parliament overwhelmingly voted to remove presidential term limits from the Constitution, paving the way for President Yoweri Museveni to contest in 2006 elections and beyond! During the voting at the committee stage where each clause in the third Constitution (Amendment) Bill, 2005 has been subjected to independent scrutiny, 220 MPs voted in favour of lifting term limits, while 53 opposed.


Uganda's history since Independence 9th October 1962; has been characterized by political instability. Against that background, the Constituency Assembly unanimously agreed that any President after the enactment of the 1995 Uganda Constitution was to have a maximum of two terms in office. It is most unfortunate that the good in the Constitution was reversed by Parliament in 2005 to give chance to the incumbent President Yoweri Museveni to contest for President in 2006!
Right thinking Ugandans are opposed to this move which was undertaken against the background that NRM had majority in Parliament which was used with the alleged facilitation (bribe of shs 5m) said to have been given to NRM legislators as a token thank you for removing the term limits!

Working Paper Series
Posted by williamkituuka.com at 7:19 AM