What next as crocodiles eat people in Kayunga district? 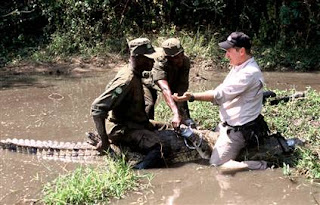 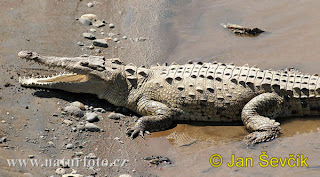 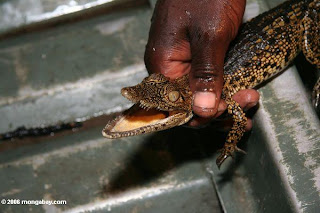 Juvenile Nile crocodile captured for a population survey
It is no longer news that a crocodile has eaten a human being. About two weeks ago in Kayunga district, it was reported that a crocodile ate a man and it was later a shot to recover his remains. Another man more than a month ago wrestled with a crocodile and he ended up badly injured to the extent of admission to Kayunga Hospital. On Monday, 19 April 2010, another person fell victim to a crocodile and the locals were waiting for the police to shoot it so that the remains would be recovered. A school child was killed by a crocodile last week as the child went to fetch water.

The authorities in Uganda must safeguard the lives of the people. Government must come up with a clear policy and action on this. If crocodiles can move out of water and get to people's gardens and households, a responsible Government would put an armed group to counter them or even kill if its the solution. Secondly, it is absurd that some parents can be irresponsible; why should a parent send a child to fetch water a lone in an area prone to crocodiles?

20-year-old Edward Gwebayanga, was jammed to death by a Crocodile in Bukizibu village, Uganda while swimming in the lake. He is the 19th person to get eaten by a Crocodile this year at Bukizibu village. If that makes Volusia County, Florida's measly 17 non-fatal Shark bites seem insignificant and retarded, it's because they are. Crocodiles Kill way more people each year than Sharks. It is hard to say, with any precision, how many people are eaten by Crocodiles each year, but the current estimate is several hundred. The reason why Croc bites are so hard to record is that so many of them happen in remote parts of Africa and Asia and happen to "native" or "tribal" people that the mainstream media doesn't give a flying fuck about. There were only four fatal Shark bites recorded in 2006.
Posted by williamkituuka.com at 11:11 PM