With the CHOGM type of corruption as PAC uncovers it, don't we need a change? 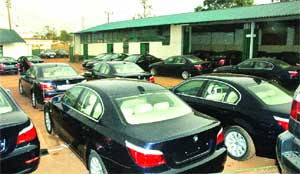 Some of the CHOGM cars parked at the Europcar warehouse on November 14, 2007
How sh10b on CHOGM cars (above) was spent
By Vision Reporters

As Parliament starts scrutinising the Commonwealth Heads of Government Meeting (CHOGM) expenditure today, The New Vision looks into the cost and procurement process of vehicles for meeting the that took place in Kampala in November 2007.

The Government spent over sh20b on vehicles for CHOGM. About half of the money, or sh9.4b, was spent on 144 executive vehicles for the Queen and other heads of government. The rest went to Police motorcycles, patrol cars, lead cars and ambulances.

The Auditor General found a lot of irregularities in the procurement process of the vehicles. In addition, his report found that the vehicles purchased and hired were not according to the agreed specifications, both in terms of model and year of manufacture.

The following is a summary of events on the purchase of the executive vehicles only, compiled from the various audit reports.

First bidding
In May 2006, bid documents were made and firms invited to submit proposals. Adverts appeared in Daily Monitor, The New Vision and The East African on May 31 and again on June 5 and 8. Consequently, 40 companies were given the solicitation documents.

On July 14, 2006, three days before closing date, the works ministry halted the process indefinitely. The reasons given to the Permanent Secretary of the works ministry, Charles Muganzi, were the “hurried nature of the process”. Other reasons cited were the fact that the minister was not consulted before tendering, and that revisions had been made in numbers, types and specifications.

On December 18, five months after the process was halted, Muganzi wrote to the procurement authority, PPDA, asking to approve direct procurement from one company, BMW.

According to the letter, the decision had been taken two weeks earlier by the Cabinet sub-committee on CHOGM, chaired by Vice-President Gilbert Bukenya. The letter did not explain how BMW was chosen and why it took the Cabinet five months to take this decision.

On January 5, 2007, PPDA rejected the request for direct bidding and instead allowed for restricted bidding, demanding for at least three companies to send in proposals. For one-and-a-half months, no action was taken by the ministry.

As time was running out, President Yoweri Museveni on February 22, 2007 wrote to the CHOGM Executive Director expressing concern as to “how one company, BMW, had been agreed upon when there were others willing to offer the same combination of purchase and lease option”.

The vehicles to be supplied were 30 executive cars for purchase and 174 vehicles for hire for 30 days. Although CHOGM only lasted for three days, a period of 30 days was provided to allow enough time for inspection. Only two firms sent in bids: Motorcare and Spear Motors.

The committee evaluated the two proposals between April 12 and 24. Motorcare’s proposal had been submitted under a joint venture with another company, Europcar, and signed by an official acting on behalf of Europcar. Under the law, the company that is invited to bid should be the one submitting the bid. It was later discovered that Europcar had changed its name a year earlier and was by now called Intercar.

During the evaluation, the committee noted that Motorcare submitted a trading license which had expired in December 2006. Under the law, the company should have been disqualified. Instead, the committee forwarded the matter to the Solicitor General who asked Motorcare to explain. Motorcare subsequently submitted a new trading license, dated April 16, 2007. The law also requires that if a bid is submitted by a joint venture, the license should be in the name of the joint venture.

As to the cost, the committee noted that there were two options for the Government to decide on. It could either buy 204 Mercedes Benz cars at 8.3m euros (sh19b), or buy 30 cars and hire the remaining 174 for 6.9m euro (sh15.7b). The committee recommended that since “the rental option does not offer value for money”, it would be prudent to buy all 204.

On May 8, 2007, Spear Motors was notified that it won the tender for the supply of 204 Mercedes Benz cars at 8.3m euro. “I am pleased to inform you that on May 2, the contracts committee approved your tender for supply of executive saloon cars for VIP use during CHOGM 2007,” said the letter, signed by Muganzi.

Process halted
The same month, in a surprise move, the Vice-President halted the process. In a letter dated May 28, 2007 to the transport committee, he wrote that the Cabinet sub-committee had decided to lease all the vehicles. He claimed that he received a cheaper option for leasing BMW cars at 4.1m euro (sh9.4b). It was not clear how he got the offer privately as it was not presented during the tendering process. In a letter two days later, Bukenya directed and authorised the transport committee to go ahead and initiate negotiations with the representative of BMW in Uganda. The ‘new’ offer by BMW included 62 station wagons which had not been requested for in the bid documents. The number of cars was also brought down, from 204 to 144. Of that number, 114 were to be leased and 30 bought. According to the regulations, change of specifications and numbers should have been communicated to the other bidders and new bids should have been invited.

On June 1, 2007, Muganzi wrote to Spear Motors, notifying them of the cancellation of the tender “due to lack of sufficient funds for the procurement.” The same day, new bidding documents were made and they were strictly given to one firm, Motorcare/Intercar. Permission to use direct sourcing was not obtained from PPDA, contrary to regulations. This was five months before CHOGM.

However, Motorcare did not submit the required performance security of 10% of the total contract sum.

“Failure to submit the performance security shall constitute sufficient grounds for the annulment of the contract award,” the document said.

The company also did not submit documentary evidence of three years supply experience, as was a requirement in previous biddings. A further inquiry from the Uganda Revenue Authority revealed that one of the partners, Europcar, had not submitted any trading returns since it was formed in 2005.

Nevertheless, the evaluation committee recommended the award of tender to Motorcare/Intercar the next day. The award was subject to negotiations on price reduction, payment and delivery schedule. On June 6, the negotiation team carried out negotiations but, as expected, Motorcare/Intercar being the sole bidder, did not lower its price. Ten vehicles for training of drivers were supposed to be delivered by September 25 while the remaining 134 were to be delivered by October 21.

On August 15, 2007, Spear Motors sued the Government over breach of contract, demanding sh1.3b in damages. The owner, Gordon Wavamunno, claimed that he had already placed orders with the manufacturer. He also raised the issue of Motorcare’s trading license that had expired.

Visit to factory
On September 16, 2007, three Government representatives travelled to the BMW factory in Germany to inspect the vehicles, in accordance with the terms of the contract.

However, upon arrival, they were told that the vehicles were already en route to Uganda. The Government thus wasted sh14.6m in air tickets and allowances.

“It is surprising how the supplier made invitations, hotel bookings and an itinerary well knowing that the vehicles were not in the factory,” the Auditor General noted in his report.

Arrival of cars
The first batch of 17 cars arrived in Uganda on September 19, 2007, four days after the purported departure. Normally, air freight from Europe to Entebbe takes only one day.

The last batch of vehicles arrived in Uganda in the middle of October, one month after the purported departure.

The supplier only handed over the vehicles to the works ministry on November 17, five days before CHOGM. This was contrary to the delivery schedule.

At inspection of the vehicles, a lot of snags were detected. Most cars lacked spare tyres and model plates. The latter is an important vehicle identification guide.

Some cars were diesel instead of petrol, other were manual instead of automatic. However, because there were only five days left, the Government had no choice but to accept the vehicles as delivered.

Audit findings
Further scrutiny on the BMW website of the vehicle identification number, using the chassis numbers, revealed that all 30 saloon cars the Government bought were manufactured in November 2005, not 2007.

The Government, instead, paid 47,600 euro per car or more than double. Following this logic, and as airfreight was charged separately, the Government could have lost 777,000 euro (sh1.7b) in the purchase of 30 BMW cars.

As a result of late delivery, the hired cars were only used for about eight days, yet the same price was paid as for 30 days.

The Auditor General’s office also found that the factory in Germany had not manufactured right-hand drive cars for five years.

It established that the 64 hired station wagons were actually manufactured by a plant in Austria and that 41 of them were three years old, contrary to agreed specifications.

Considering all this, it might have been cheaper for the Government to buy all the vehicles, some of which were three years old, than leasing them.

Because of the controversies surrounding the procurement process, the Auditor General decided to carry out further investigations into the ownership of Europcar/Intercar.

It established that the company was formed on April 29, 2005. Its initial shareholders were Robert Kabonero (30%), Albert Gatare (30%), Eugene Nyangahene (20%) and Seci Company (20%), owned by foreign minister Sam Kutesa and his family. Three months later, Seci Company transferred its shares to Kabonero.

Although the works ministry wrote to the supplier in December 17, 2007 to ask for remedies, the New Vision was not able to establish by yesterday if any response was received. Since the supplier did not submit a performance bond, there is a risk of the Government losing all the money.
Posted by williamkituuka.com at 1:52 AM